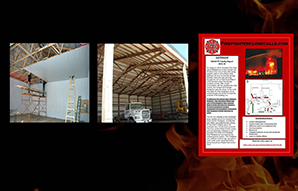 Hidden spaces that support the spread of fire can have devastating effects for firefighters who enter burning structures. In August 2014, one firefighter was killed and another was injured after a roof collapse that was likely due, in part, to a fire that was hidden by a pan ceiling. A pan ceiling is a metal ceiling that, in this case, covered wooden truss supports of a commercial storage unit. The space between the pan ceiling and roof created a room similar to an attic that supported the spread of the fire and burned the trusses, which ultimately caused the roof collapse.

To better understand this fire event, the National Institute for Occupational Safety and Health (NIOSH) Fire Fighter Fatality Investigation and Prevention Program (FFFIPP) conducted an investigation of the assistant fire chief ’s line-of-duty death. Rapid fire spread that was hidden by a pan ceiling was identified as a contributing factor in the collapse that killed the assistant chief. In addition to the pan ceiling in this incident hiding the fire, FFFIPP investigators identified other factors that contributed to the death of the assistant fire chief. These were the lack of an established incident command, break-down in communication, poor situational awareness, and no safety officer on scene.

The NIOSH FFFIPP published a report detailing this fire event. The report includes contributing factors as well as recommendations to prevent similar deaths from occurring. To ensure that the information in the report got to the broader fire service community, key information from the report was featured on a training poster prepared by Firefighter Close Calls, a popular online firefighting news and update forum.