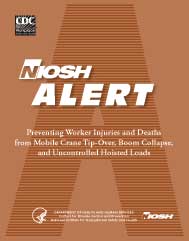 The National Institute for Occupational Safety and Health (NIOSH) requests assistance in preventing injuries and deaths of workers exposed to mobile crane tip-over, boom collapse, and uncontrolled hoisted loads. Recent NIOSH investigations suggest that workers may not fully recognize the hazards associated with operating or working near mobile cranes. Crane tip-overs can result from operating a crane outside the manufacturer’s recommended safe lifting capacity. Booms can collapse for reasons such as overloading, improper disassembly procedures, and improper rigging. Both crane tip-over and boom collapse can result in workers being struck by parts of the crane or uncontrolled hoisted loads.

This Alert describes six incidents resulting in the deaths of eight workers and injuries to two others that were either working near or operating mobile cranes. In each incident, these injuries or deaths could have been prevented by using proper safety procedures such as not exceeding the crane’s lift capacity; following proper set-up, maintenance and dismantling procedures; and not working under a suspended load. NIOSH requests that the information in this Alert be brought to the attention of all employers, managers, supervisors, crane operators, riggers, and ground workers in companies that own or rent mobile cranes.