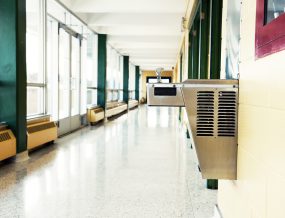 The local media reported test results showing high levels of lead in drinking water at some Oregon schools, which generated substantial public concern statewide. There were public concerns that schools had not been transparent about testing for lead and had not informed parents and area residents in a timely manner. In April 2016, Oregon’s Governor directed Oregon Health Authority (OHA) and Oregon Department of Education (ODE) to review existing lead in water testing programs and to create a planpdf iconexternal icon to address the problem of lead in school drinking water. As part of the response, OHA recommended that school districts test their drinking water for lead and make the test results easily available to the public.

The Oregon Tracking Program worked closely with other OHA and ODE partners to develop an interactive, searchable mapexternal icon that provides public access to schools’ drinking water test results for lead. They designed the map as a “story map” which displays lead data map alongside messaging about data collection and interpretation, which makes the map more visually appealing and easy to understand. Oregon Tracking and partners also developed a video demonstrating how to use the map, information for school administrators and parents on lead in school drinking water, and other resources to help reduce children’s exposure to lead and other harmful contaminants in schools.

On December 7, 2016, OHA launched the interactive story map for public use. Following the launch, 26 news articles featured the story map, which led to 3,000 map views for the month of December 2016. Parents, community members, and school staff can easily access information about lead in school drinking water in a transparent way.

Increasing Awareness of and Testing for Radon 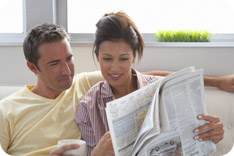 Radon is the second leading cause of lung cancer and is the leading environmental cause of cancer deaths in the United States. Radon is a colorless, odorless, tasteless radioactive gas. Testing is the only way to know if radon levels are high in a building or home. In 1993, the U.S. Environmental Protection Agency identified Oregon as having low to moderate levels of radon. However, recent data show that some areas of the state have high radon levels. The state needed more accurate data on radon hazards to promote testing. 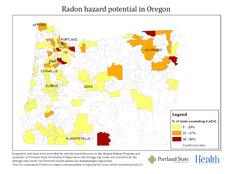 Television news coverage and two front-page articles in The Oregonian newspaper about the maps helped raise public awareness of radon hazards and encourage radon testing. Following the media coverage, monthly average visits to the Radon Program’s web pages tripled. Data from the American Lung Association (ALA) of Oregon showed that they sold nearly 300 test kits during the first day the front page Oregonian article ran. Within three days, ALA sold more radon test kits online than they did in the entire year of 2012. Increases in radon testing likely will lead to more people taking steps to decrease the amount of radon they come in contact with.

In the United States, environmental tobacco smoke (ETS) causes about 3,000 lung cancer deaths in non-smokers each year. ETS is also linked to heart disease, nasal and sinus cancer, sudden infant death syndrome, asthma, middle ear infections in children, and other illnesses that affect breathing. Although data show ETS exposure is going down in the U.S., it is still a major public health concern. In 2006, only 12 states passed clean indoor air regulations that cover nearly all indoor worksites, including bars and restaurants. Oregon was not one of them.

The Oregon Tracking Program worked with several partners to conduct the Oregon Air Monitoring Project. This project examined indoor air quality in 107 hospitality locations in the state and looked at how indoor smoking affected indoor air pollution. Results of the project showed that restaurants, bars, and other hospitality locations allowing indoor smoking had poorer air quality than both indoor-smoke-free sites and outdoor air. Workers in the locations sampled were exposed to pollution levels more than three times higher than the yearly amount of fine particle air pollution that the U.S. Environmental Protection Agency considers safe to breathe. This project showed that Oregon workers and people visiting bars and restaurants are exposed to harmful levels of cancer-causing chemicals and other poisons in cigarette smoke.

This study influenced state legislation passed in 2009, known as the Clean Indoor Air Act of Oregon. With a few exceptions, this legislation makes it illegal to smoke at work and in public places. Policies such as this can reduce ETS exposure and improve public health.

Studies from the 1970s showed elevated levels of arsenic in private wells in the Sutherlin Valley area. The arsenic found in these wells most likely comes from the bedrock and soil. Long-term exposure to arsenic through drinking water is known to cause various types of cancer, including lung, skin, bladder, kidney, nasal passage, liver, and prostate. Arsenic exposure may also affect reproductive organs, the brain and nervous system, the heart and blood vessels, and cause darkening and corns on skin. Since the state has not required water to be tested for arsenic, people living in the area for many years may have been drinking water containing amounts of arsenic that could be harmful to health. Also, new homeowners may be unaware of arsenic in their water supply. Without more current information about arsenic levels, state or local health officials cannot know the best ways to protect peoples’ health.

The Oregon Tracking Program, working with several partners, measured arsenic levels in more than 100 home wells in Sutherlin Valley. Several wells were found to have arsenic levels higher than healthy drinking water standards. People using those wells were notified. A community meeting was held to explain the results of the testing and to inform residents about ways to remove arsenic from the well water. The partners also provided fact sheets and health information resources. In addition, local newspapers published articles notifying residents of testing results and encouraging them to test their well water regularly.

This study influenced state legislation, passed in 2009, that added arsenic to the list of substances tested in private wells. Now, every time a piece of property with a private well is sold, the water must be tested for arsenic and other contaminants. This testing will limit exposure to arsenic and lower the possibility for health problems caused by it.