During the 2020–21 school year, national coverage with state-required vaccines among kindergarten students declined from 95% to approximately 94%.

During the 2021–22 school year, coverage decreased again to approximately 93% for all state-required vaccines. The exemption rate remained low (2.6%). An additional 3.9% without an exemption were not up to date with measles, mumps and rubella vaccine. Despite widespread return to in-person learning, COVID-19–related disruptions continued to affect vaccination coverage and assessment for the 2021–22 school year, preventing a return to prepandemic coverage.

Increasing follow-up with undervaccinated students to reduce the impact of disruptions on vaccination coverage can help protect students from vaccine-preventable diseases. 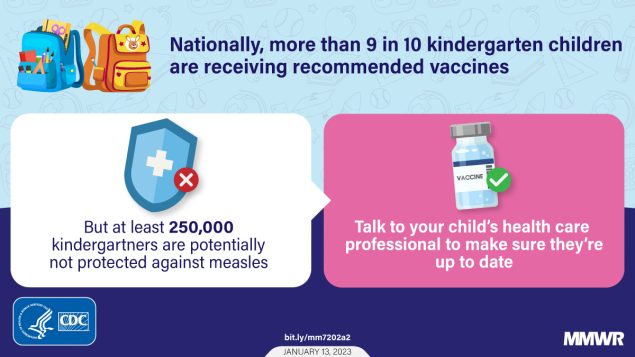 State and local school vaccination requirements protect students and communities against vaccine-preventable diseases (1). This report summarizes data collected by state and local immunization programs* on vaccination coverage and exemptions to vaccination among children in kindergarten in 49 states† and the District of Columbia and provisional enrollment or grace period status for kindergartners in 27 states§ for the 2021–22 school year. Nationwide, vaccination coverage with 2 doses of measles, mumps and rubella vaccine (MMR) was 93.5%¶; with the state-required number of diphtheria, tetanus, and acellular pertussis vaccine (DTaP) doses was 93.1%**; with poliovirus vaccine (polio) was 93.5%††; and with the state-required number of varicella vaccine doses was 92.8%.§§ Compared with the 2020–21 school year, vaccination coverage decreased 0.4–0.9 percentage points for all vaccines. Although 2.6% of kindergartners had an exemption for at least one vaccine,¶¶ an additional 3.9% who did not have an exemption were not up to date with MMR. Although there has been a nearly complete return to in-person learning after COVID-19 pandemic-associated disruptions, immunization programs continued to report COVID-19–related impacts on vaccination assessment and coverage. Follow-up with undervaccinated students and catch-up campaigns remain important for increasing vaccination coverage to prepandemic levels to protect children and communities from vaccine-preventable diseases.

Vaccination coverage and exemption estimates were adjusted on the basis of survey type and response rate.§§§ National estimates measure coverage and exemptions among all kindergartners, whereas medians indicate the midpoint of state-level coverage, irrespective of population size. During the 2021–22 school year, immunization programs reported 3,837,259 children enrolled in kindergarten in 49 states and the District of Columbia.¶¶¶ Reported estimates are based on 3,543,080 (92.2%) children who were surveyed for vaccination coverage, 3,688,904 (96%) surveyed for exemptions, and 2,487,284 (65%) surveyed for grace period and provisional enrollment status. Potentially achievable coverage with MMR (the sum of the percentage of children who were up to date with 2 doses of MMR and those not up to date but with no documented vaccination exemption) was calculated for each state. Nonexempt students include those who were provisionally enrolled in kindergarten, in a grace period, or otherwise without documentation of complete vaccination. SAS software (version 9.4; SAS Institute) was used for all analyses. This activity was reviewed by CDC and was conducted consistent with applicable federal law and CDC policy.****

Vaccination assessments varied by state because of differences in required vaccines and required numbers of doses, vaccines assessed, methods of data collection, and data reported (Supplementary Table 1, https://stacks.cdc.gov/view/cdc/123203). Kindergartners were considered up to date with a given vaccine if they received all doses required for school entry, except in eight states†††† that reported kindergartners as up to date for any vaccine only if they had received all doses of all vaccines required for school entry. States were asked to report any COVID-19–related impact on kindergarten vaccination measurement and coverage through a combination of structured responses and open-ended questions.

Nationally, MMR coverage for both the 2020–21 and 2021–22 school years was lower than that reported since 2013–14 (Figure 1). Nationwide, 3.9% of kindergarten students were not fully vaccinated and not exempt. Among the 36 states and the District of Columbia with MMR coverage <95%, all but four could potentially achieve ≥95% MMR coverage if all nonexempt kindergartners who were within a grace period, provisionally enrolled, or otherwise enrolled in school without documentation of vaccination were vaccinated (Figure 2).

During the 2021–22 school year, coverage with MMR, DTaP, polio, and varicella vaccines among kindergarten children was approximately 93% nationwide for each vaccine, lower than the 94% coverage reported during the 2020–21 school year, and the 95% coverage reported during the 2019–20 school year, when children were vaccinated before the pandemic (2,3). Coverage with all four vaccines declined in most states. National MMR coverage among kindergarten students remained below the Healthy People 2030 target of 95% (4) for the second consecutive year. These findings are consistent with those of continuing declines in routine childhood and adolescent vaccine administration through March 2021 (5). MMR coverage of 93.5% translates to nearly 250,000 kindergartners who are potentially not protected against measles; clusters of unvaccinated and undervaccinated children can lead to outbreaks of vaccine-preventable diseases.

The overall percentage of children with an exemption remained low during the 2021–22 school year at 2.6%, although the percentage of children with exemptions increased in 38 states and the District of Columbia. Nationwide, 3.9% of kindergarten students were not fully vaccinated with MMR and not exempt, and this percentage increased in most states compared with 2020–21. Nonexempt undervaccinated students often attend school while in a grace period or are provisionally enrolled; in many states, these policies were expanded either formally or informally during the 2020–21 school year, and this expansion continued to a lesser extent during the 2021–22 school year, even as most schools returned to in-person classes. States continued to report COVID-19–related impacts on vaccination coverage and assessment activities.

The findings in this report are subject to at least five limitations. First, comparisons among states are limited because of variation in states’ requirements such as which vaccines are required, the number of doses required, the date required, and the type of documentation accepted; data collection methods; allowable exemptions; and definitions of grace period and provisional enrollment. Second, representativeness might be negatively affected by data collection methods that assess vaccination status at different times or miss some schools or students, such as those who are homeschooled. Third, vaccination coverage, exemption rates, or both, might be underestimated or overestimated because of inaccurate or absent documentation or missing schools. Fourth, national coverage estimates for the 2021–22 school year include only 49 of 50 states and the District of Columbia and use lower bound estimates for eight states; exemption estimates include 49 states and the District of Columbia and use lower bound estimates for five states, and grace period or provisional enrollment estimates include only 27 states. Finally, states continued to report that the COVID-19 pandemic response created various barriers that limited the amount and quality of student vaccination data collected and reported by local health departments.

* Federally funded immunization programs are located in 50 states and the District of Columbia, five cities, and eight U.S territories and freely associated states. Two cities reported data, which were also included in data submitted by their state, to CDC. State-level data were used to calculate national estimates and medians. Immunization programs in territories reported vaccination coverage and exemptions; however, these data were not included in national calculations.

** Nebraska requires 3 doses of DTaP, Maryland and Wisconsin require 4 doses, and all other states require 5 doses, unless dose 4 was administered on or after the fourth birthday. The reported coverage estimates represent the percentage of kindergartners with the state-required number of DTaP doses, except for Kentucky, which requires 5 doses of DTaP by age 5 years but reported 4-dose coverage for kindergartners.

†† Two states (Maryland and Nebraska) require only 3 doses of polio vaccine; all other states require 4 doses unless the last dose was given on or after the fourth birthday.

*** Twelve states reported coverage and exemption data for at least some homeschooled kindergartners, either separately or included with data from public or private schools.

§§§ Immunization programs that used census or voluntary response provided CDC with data aggregated at the state or local (city or territory) level. Estimates based on these data were adjusted for nonresponse using the inverse of the response rate, stratified by school type (public, private, and homeschool, where available). Programs that used complex sample surveys provided CDC with data aggregated at the school or county level for weighted analysis. Weights were calculated to account for sample design and adjusted for nonresponse.

¶¶¶ These totals are the summations of the kindergartners surveyed among programs reporting data for coverage, exemptions, grace periods, and provisional enrollment. Data from cities and territories were not included in these totals.