Use of 15-Valent Pneumococcal Conjugate Vaccine Among U.S. Children: Updated Recommendations of the Advisory Committee on Immunization Practices — United States, 2022

On June 22, 2022, the Advisory Committee on Immunization Practices recommended use of PCV15 as an option for pneumococcal conjugate vaccination of persons aged <19 years, according to currently recommended PCV13 dosing and schedules. Risk-based recommendations on use of PPSV23 have not changed.

Use of PCV15 as an alternative to PCV13 is expected to further reduce pneumococcal disease incidence in children and adolescents. 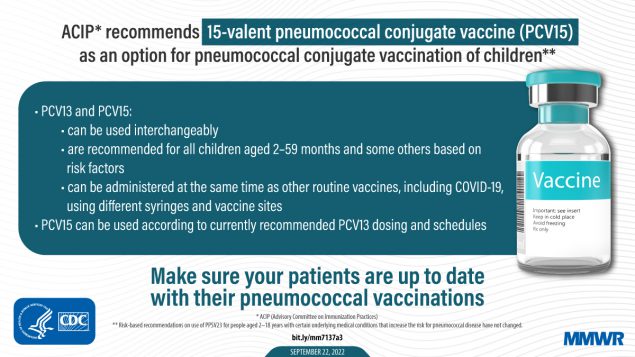 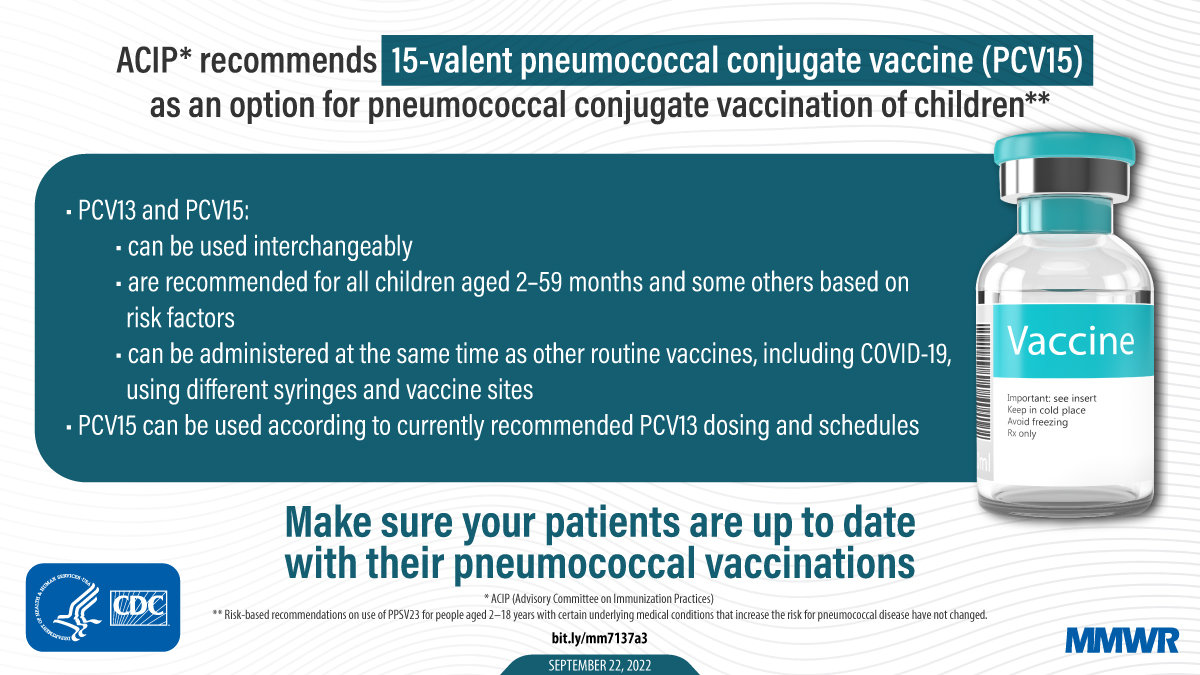 The 13-valent pneumococcal conjugate vaccine (PCV13 [Prevnar 13, Wyeth Pharmaceuticals, Inc, a subsidiary of Pfizer, Inc]) and the 23-valent pneumococcal polysaccharide vaccine (PPSV23 [Merck Sharp & Dohme LLC]) have been recommended for U.S. children, and the recommendations vary by age group and risk group (1,2). In 2021, 15-valent pneumococcal conjugate vaccine (PCV15 [Vaxneuvance, Merck Sharp & Dohme LLC]) was licensed for use in adults aged ≥18 years (3). On June 17, 2022, the Food and Drug Administration (FDA) approved an expanded usage for PCV15 to include persons aged 6 weeks–17 years, based on studies that compared antibody responses to PCV15 with those to PCV13 (4). PCV15 contains serotypes 22F and 33F (in addition to the PCV13 serotypes) conjugated to CRM197 (genetically detoxified diphtheria toxin). On June 22, 2022, CDC’s Advisory Committee on Immunization Practices (ACIP) recommended use of PCV15 as an option for pneumococcal conjugate vaccination of persons aged <19 years according to currently recommended PCV13 dosing and schedules (1,2). ACIP employed the Evidence to Recommendation (EtR) Framework,* using the Grading of Recommendations, Assessment, Development and Evaluation (GRADE)† approach to guide its deliberations regarding use of these vaccines. Risk-based recommendations on use of PPSV23 for persons aged 2–18 years with certain underlying medical conditions§ that increase the risk for pneumococcal disease have not changed.

The 7-valent pneumococcal conjugate vaccine (PCV7 [Prevnar, Wyeth Pharmaceuticals, Inc.]) was the first pneumococcal conjugate vaccine recommended for U.S. children in 2000 and was replaced by PCV13 in 2010. PCV13 was licensed by FDA based on safety and immunogenicity data compared with PCV7, and systematic reviews have shown that PCV13 is effective against acute otitis media, pneumonia, and invasive pneumococcal disease (IPD) in children (5–7). PCV13 has been recommended for routine use among all children aged 2–59 months. In addition, risk-based use of PCV13 is recommended for children aged 60–71 months with certain underlying medical conditions that increase the risk for pneumococcal disease (hereafter, risk conditions), and for persons aged 6–18 years with an immunocompromising condition,¶ cerebrospinal fluid leak, or cochlear implant (a subset of risk conditions). PPSV23 is only recommended for persons aged 2–18 years with risk conditions.

During February–June 2022, ACIP reviewed the epidemiology of pneumococcal disease and considerations for use of PCV15 in children. The ACIP Pneumococcal Vaccines Work Group evaluated the quality of evidence for PCV15 immunogenicity and safety, using the GRADE approach. Applying the EtR Framework, the Work Group reviewed relevant scientific evidence regarding the benefits and harms of PCV15 use among children who are recommended to receive PCV13. Within the EtR framework, ACIP considered the importance of the public health problem, benefits and harms, the target population’s values and preferences, resource use, equity, acceptability, and feasibility of PCV15 use. After a systematic review of the literature, the Work Group defined critical outcomes and used GRADE to assess certainty of evidence rated on a scale of 1 (high certainty) to 4 (very low certainty).**

Acute otitis media is one of the most common diagnoses associated with outpatient pediatric medical visits (8) and antibiotic prescribing (9). According to a recent analysis using administrative data, 20,800 all-cause acute otitis media episodes per 100,000 person-years occurred among U.S. persons aged <18 years during 2018, with a higher incidence in younger age groups (10). During 2015–2019, in a cohort of 319 U.S. children aged 6–36 months with clinically diagnosed acute otitis media, Streptococcus pneumoniae was detected in the middle ear fluid of 24% (11); 9% of these children were infected with a PCV13 serotype (including 6C), and 8% with one of the serotypes included in PCV15 but not in PCV13 (serotypes 22F and 33F) (11). Additional analysis using administrative data estimated that among persons aged <18 years, 1,280 to 3,990 episodes of health care utilization per 100,000 person-years occurred in 2014 for all-cause pneumonia (12), and that during 2018–2019, 87 to 680 hospitalizations per 100,000 population occurred for all-cause pneumonia (13). Using population-based surveillance data, S. pneumoniae was detected in 4% of persons aged <18 years who were hospitalized with community-acquired pneumonia; the attributable proportion of pneumococcus and serotype distribution among all-cause pneumonia in children and adolescents, however, has not been determined (14). According to U.S. multistate surveillance, the incidence of IPD†† during 2018–2019 was 7.2 per 100,000 children aged <5 years and 1.5 per 100,000 persons aged 5–18 years. PCV13-serotypes accounted for 21% and 34% of IPD cases in children aged <5 years and persons aged 5–18 years, respectively; similarly, additional serotypes unique to PCV15§§ caused 15% and 23% of IPD in children aged <5 years and persons aged 5–18 years, respectively (15).

Phase II and III randomized controlled trials (RCTs) evaluated the immunogenicity of PCV15 compared with PCV13 in healthy infants and children (16–19), persons aged 5–17 years with sickle cell disease (20), and persons aged 6–17 years living with HIV infection (21). The following outcomes were measured 30 days after administration of ≥1 doses of PCV, as specified in the respective study protocols: serotype-specific immunoglobulin G (IgG) geometric mean concentration (GMC) (16–21), proportion of participants meeting the serotype-specific IgG value of ≥0.35 μg/mL (response rate) (16–19), and opsonophagocytic activity geometric mean titer in a subset of the study population (17,20,21). One of the phase III RCTs enrolled healthy children aged 42–90 days who received PCV13 or PCV15 at ages 2, 4, 6, and 12–15 months. Except for serotype 6A GMC ratio after dose 3, PCV15 met criteria for noninferiority¶¶ to PCV13 for the 13 shared serotypes regarding the response rate after dose 3 and GMC ratio after dose 3 and after dose 4. PCV15 elicited statistically significantly higher immune response for serotype 3 than for PCV13 (17). PCV15 met the noninferiority criteria compared with PCV13 for the two unique serotypes 22F and 33F (17).

Recommendations for Use of PCV

ACIP recommends use of PCV (either PCV13 or PCV15) for all children aged 2–59 months. In addition, risk-based PCV use is recommended for children aged 60–71 months with risk conditions, and persons aged 6–18 years with an immunocompromising condition, cerebrospinal fluid leak, or cochlear implant. For all recommendations, PCV13 and PCV15 can be used interchangeably. Interruption of the vaccination schedule does not require reinstitution of the entire series or the addition of extra doses.

Persons Aged <19 Years with No Previous PCV13 or PCV15 Vaccination

Infants aged 2–6 months. Four doses of PCV (either PCV13 or PCV15) are recommended. The primary infant series consists of 3 doses of PCV. Infants receiving their first dose at age ≤6 months should receive 3 doses of PCV at intervals of approximately 8 weeks (with a minimum interval of 4 weeks). The fourth (booster) dose is recommended at age 12–15 months and ≥8 weeks after the third dose (Table 1).

Infants should begin the schedule at age 2 months, although the first dose can be administered as early as 6 weeks. For prematurely born infants (i.e., <37 weeks’ gestation) who are medically stable enough to be vaccinated (26), PCV should be administered at the recommended age concurrent with other routine vaccinations.

Complete PCV13 vaccination. A supplemental dose of PCV15 is not indicated for children who have received 4 doses of PCV13 or who completed another age-appropriate PCV13 schedule.

Children aged ≥2 years with any risk conditions should receive PPSV23 after completing all recommended PCV doses (either PCV13 or PCV15). These children should receive a single dose of PPSV23 at age ≥2 years and ≥8 weeks after the most recent PCV dose (Table 3). Children who have received PPSV23 but have not yet completed their recommended PCV doses should receive PCV ≥8 weeks after the PPSV23 dose. When elective splenectomy, immunocompromising therapy, or cochlear implant placement is being planned, PCV or PPSV23 vaccination should be completed ≥2 weeks before surgery or initiation of therapy, if possible.

Recipients of hematopoietic stem cell transplants. Recipients of hematopoietic stem cell transplants are recommended to receive 3 sequential PCV doses followed by a dose of PPSV23 beginning 3–6 months after the transplant, as described in the General Best Practice Guidelines for Immunization (27). In children with graft-versus-host disease, PPSV23 can be replaced with a fourth dose of PCV.

PCV13 and PCV15 are both available in a single-dose prefilled syringe as a 0.5-mL dose administered intramuscularly. Either PCV13 or PCV15 can be administered at the same time as other routine childhood vaccinations, including COVID-19 vaccines (28), in separate syringes and using different injection sites. Concurrent PCV15 administration with vaccines containing diphtheria; tetanus; acellular pertussis; inactivated poliovirus; Haemophilus influenzae type b; hepatitis A; hepatitis B; measles, mumps, and rubella; rotavirus; and varicella were studied (17,19). Immunogenicity of these antigens was similar when administered concurrently with PCV15 and PCV13 (17,19). Coadministration of PCV15 with meningococcal vaccines has not been studied. The same precautions used for coadministration of PCV13 and meningococcal vaccines should be applied when PCV15 is used (29). Risk for febrile seizures in children who received PCV15 concurrently with an influenza vaccine has not been studied.

Before administering PCV or PPSV23, health care providers should consult relevant package inserts regarding precautions and contraindications (30–32). Adverse events occurring after administration of any vaccine should be reported to the Vaccine Adverse Event Reporting System (VAERS). Reports can be submitted to VAERS online, by fax, or by mail. More information about VAERS is available at https://vaers.hhs.gov.

All authors have completed and submitted the International Committee of Medical Journal Editors form for disclosure of potential conflicts of interest. Katherine A. Poehling reports institutional support from Safe Sleep for All Newborns, Love Out Loud Early Childhood Fellow, Intimate Partner Violence Collaborative Project, Because You Matter: Conversations You Want about COVID-19, text messaging follow-up for patients who missed well-child visits, and Reimagining Health and Wellness by Mothers for Our Babies, Families, and Communities. No other potential conflicts of interest were disclosed.

*** Serious adverse events were defined as any untoward medical occurrence that, at any dose, resulted in death; was life-threatening; required inpatient hospitalization or prolongation of existing hospitalization; resulted in persistent or significant disability or incapacity; was a congenital anomaly or birth defect; or was another important medical event. https://clinicaltrials.gov/ProvidedDocs/71/NCT03692871/Prot_SAP_000.pdf

§§§ Cost per dose was a weighted average of public and private dose costs from the CDC vaccine price list and from the information provided by Merck.

**** Certain children would be considered to have received a complete schedule, even if the total number of PCV doses received by 24 months is <3 doses; an example is a child who received 2 doses of PCV during age 12–23 months.