Among youths aged 14–17 years, suicide and homicide are the second and third leading causes of death, respectively. Most youth homicides result from firearm injuries; firearms are the most common method of youth suicide.

Using a new measure that excludes recreational gun carrying, one in 15 male and one in 50 female high school students reported carrying a gun for nonrecreational purposes at least once during the preceding 12 months. Gun carrying was more prevalent among those who experienced violence, suicidal ideation or attempts, or substance use. 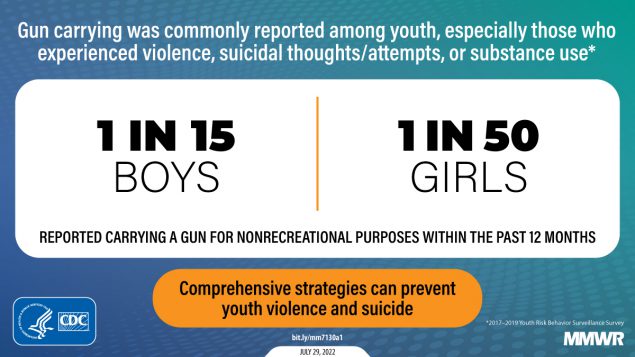 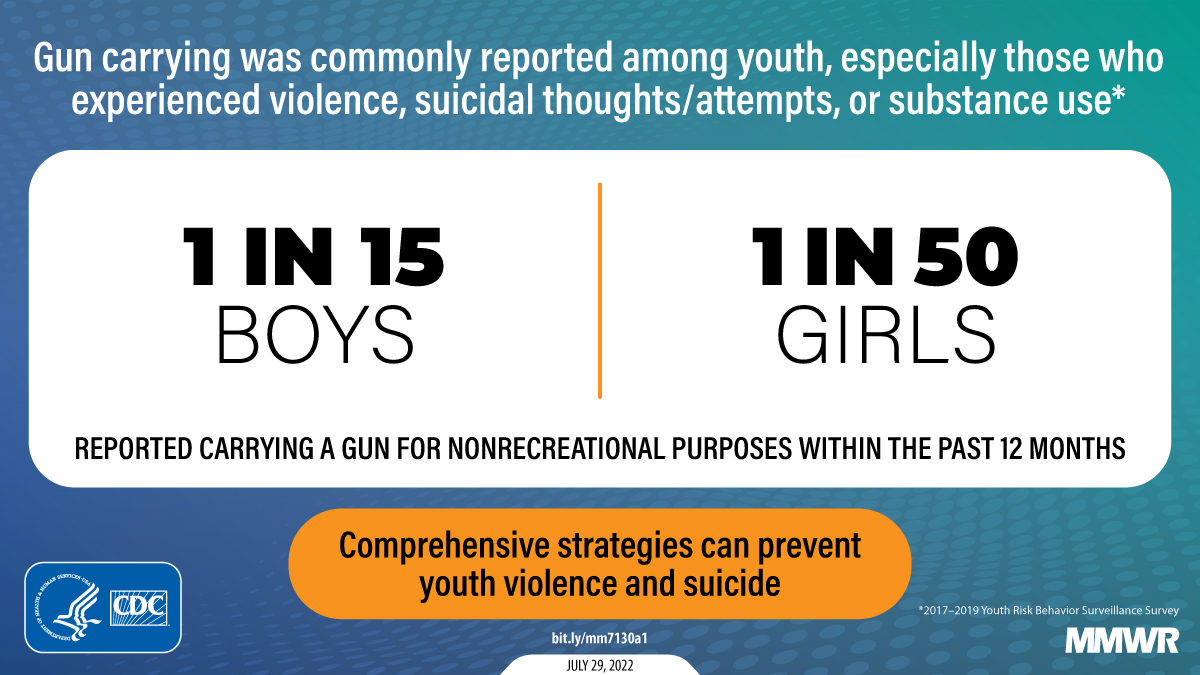 Suicide and homicide are the second and third leading causes of death, respectively, among youths aged 14–17 years (1); nearly one half (46%) of youth suicides and most (93%) youth homicides result from firearm injuries (1). Understanding youth gun carrying and associated outcomes can guide prevention initiatives (2). This study used the updated measure of gun carrying in the 2017 and 2019 administrations of CDC’s Youth Risk Behavior Survey* (YRBS) to describe the national prevalence of gun carrying for reasons other than hunting or sport among high school students aged <18 years and to examine the associations between gun carrying and experiencing violence, suicidal ideation or attempts, or substance use. Gun carrying during the previous 12 months was reported by one in 15 males and one in 50 females. Gun carrying was significantly more likely among youths with violence-related experiences (adjusted prevalence ratio [aPR] range = 1.5–10.1), suicidal ideation or attempts (aPR range = 1.8–3.5), or substance use (aPR range = 4.2–5.6). These results underscore the importance of comprehensive approaches to preventing youth violence and suicide, including strategies that focus on preventing youth substance use and gun carrying (3).

The YRBS gun carrying question was modified in 2017 to exclude carrying for recreational use and to expand the time frame from 30 days to 12 months to permit inclusion of infrequent carrying. Gun carrying was assessed by the question, “During the past 12 months, on how many days did you carry a gun? (Do not count the days when you carried a gun only for hunting or for a sport, such as target shooting).” The question reflects overall gun carrying and is not specific to a particular context such as a school or neighborhood. Gun carrying on school property is not assessed in the national YRBS. Both years of data (2017 and 2019) with the same new wording were used to maximize the sample size for analyses with relatively rare experiences and risk behaviors. The prevalence of gun carrying was comparable across years. Responses were coded as zero days versus ≥1 days (1 to ≥6 days), and prevalence differences were examined by sex, race and ethnicity, age, and sexual identity (i.e., heterosexual, gay/lesbian/bisexual, or not sure). Chi-square and t-tests were used to assess demographic differences, with p-values <0.05 considered statistically significant. Associations between gun carrying and 17 independent variables reflecting experiences with violence, suicidal ideation or attempts, or substance use (Supplementary Table 1, https://stacks.cdc.gov/view/cdc/119459) were assessed in separate sex-stratified adjusted logistic regression models, which generated aPRs and corresponding 95% CIs for each independent variable. All regression models included age, race and ethnicity, and sexual identity. SUDAAN statistical software (version 11.0.1; RTI International) accounted for the complex sample design and weighting of the survey. Frequency of gun carrying was examined among 766 male and 209 female students who carried a gun on ≥1 day in the 12 months preceding the survey. Similar models were used to test differences between those who carried a gun on ≥6 days compared with those who carried a gun on 1–5 days.

The revised YRBS question helps distinguish potentially risky forms of gun carrying from recreational use, and the expanded time frame allows infrequent gun carrying by youths to be included. Whereas one in 15 males and one in 50 females carried a gun at least once in the 12 months before the survey, the prevalence of gun carrying was much higher among some subgroups of youths, particularly those who missed school because of safety concerns and those who had experienced violence. For example, among those who were threatened or injured with a weapon on school property, more than one in four males and one in nine females carried a gun. Youths who carried a gun more frequently were more likely to have engaged in substance use and to have experienced violence. Youths who carry guns often report self-protection as the reason; however, youth gun carrying is associated with risk for serious injury or death (2,6). The higher prevalence of gun carrying among those who have experienced suicidal ideation or attempts or other forms of violence highlights the potential for lethal consequences if firearms are used against oneself or others. The association between youth gun carrying and substance use further suggests an increased risk for impaired, impulsive, situational, or escalating actions (7).

When variations in gun carrying across racial and ethnic groups and in relation to youth behaviors and experiences are reviewed, consideration of the larger context is important. Social and structural conditions (e.g., concentrated poverty, high crime rates, and economic or residential instability) are associated with youth violence and contribute to inequities in violence among racial and ethnic minority populations (3). Further, youths who have experienced violence, discrimination, or racism might feel an increased need for protection, might be unwilling or unable to rely on law enforcement, and might carry a gun for self-protection (2,6).

The findings in this report are subject to at least four limitations. First, YRBS data are cross-sectional and cannot be used to determine the temporal order of associations. Second, all examined behaviors, including gun carrying, were self-reported and therefore might be misreported. Third, the category of students unsure of their sexual identity might include students who are not yet certain of their sexual identity and students who did not understand the question (4). Finally, YRBS does not collect contextual factors that might elucidate the gun carrying behaviors of youth (e.g., how acquired, where carried, substance use while carrying, and carrying a gun for someone else).

These findings suggest that a substantial proportion of high school students, particularly those who have experienced violence, suicidal ideation or attempts, or who engage in substance use, carry guns outside the context of hunting or sport. Some studies have found that counseling and education with provision of safety devices can promote safer firearm storage behaviors in the home and that child access prevention laws are associated with reductions in risk for firearm suicide, unintentional firearm injuries, and gun carrying among children and youths (8–10). However, additional research is necessary to identify strategies to prevent youth gun carrying and support effective implementation of such strategies, especially among those youths at highest risk for experiencing violence. Taken together, the results underscore the importance of comprehensive approaches to preventing multiple forms of violence affecting youths and associated behaviors such as substance use and gun carrying. To help states and communities take advantage of the best available evidence to prevent violence, CDC has released a series of technical packages that describe the evidence for programs, policies, and practices to reduce multiple forms of violence, including youth violence, sexual or dating violence, and suicide, through strategies such as connecting youths to caring adults and activities, strengthening economic supports, improving access and delivery of care, creating protective environments, and teaching coping and problem-solving skills (3).