Declines in Prevalence of Human Papillomavirus Vaccine-Type Infection Among Females after Introduction of Vaccine — United States, 2003–2018

Please note:. This report has been corrected. An erratum has been published.

Through 2016, human papillomavirus (HPV) vaccine-type prevalence decreased among young females after introduction of HPV vaccination in 2006.

Nationally representative data through 2018 indicate that HPV vaccine-type prevalence continues to decline among females aged 14–19 (88%) and 20–24 (81%) years compared with before vaccination. The findings also show evidence of indirect protection of unvaccinated females through herd effects in these age groups.

HPV vaccination is a critical prevention tool against HPV infection, anogenital warts, and HPV-attributable precancers and cancers. HPV vaccination is highly effective and is recommended routinely at age 11–12 years and through age 26 years for persons not already vaccinated. 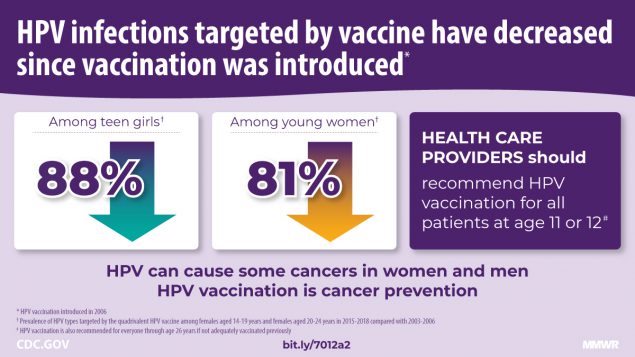 Human papillomavirus (HPV) is the most common sexually transmitted infection in the United States (1). Although most infections resolve without clinical sequalae, persistent HPV infection can cause cervical, other anogenital, and oropharyngeal cancers and anogenital warts. HPV vaccination has been recommended in the United States at age 11–12 years since 2006 for females and since 2011 for males. Catch-up vaccination is recommended through age 26 years.* A quadrivalent vaccine (4vHPV) targeting types 6, 11, 16, and 18 was mainly used until 2015, when a 9-valent vaccine (9vHPV), targeting the same four types as 4vHPV and five additional types (31, 33, 45, 52, and 58), was introduced; 9vHPV has been the only vaccine available in the United States since the end of 2016 (2). HPV vaccination coverage has increased but remains lower than that of other vaccinations recommended for adolescents (3). A decrease in prevalence of 4vHPV types detected in cervicovaginal swabs among young females from the prevaccine era (2003–2006) to 2007–2010 in the National Health and Nutrition Examination Survey (NHANES) was an early indicator of vaccine impact (2) and was also observed in later periods (4,5). NHANES data from 2017–2018 were included in this analysis to update HPV prevalence estimates among females aged 14–34 years. From the prevaccine era to 2015–2018, significant decreases in 4vHPV-type prevalence occurred among females aged 14–19 years (88%) and 20–24 years (81%). In sexually experienced females, 4vHPV-type prevalence decreased in those who reported receiving ≥1 HPV vaccine dose (97% among those aged 14–19 years, 86% among those aged 20–24 years) and in those who reported no vaccination (87% among those aged 14–19 years, 65% among those aged 20–24 years). Significant declines among unvaccinated females suggest herd effects. These data show increasing impact of HPV vaccination in the United States. HPV vaccination is a critical prevention tool against HPV infection, anogenital warts, and HPV-attributable precancers and cancers. HPV vaccination is highly effective and is recommended routinely at age 11–12 years and through 26 years for persons not already vaccinated.

NHANES is an ongoing cross-sectional survey conducted by CDC’s National Center for Health Statistics designed to monitor the health and nutrition of the U.S. non-institutionalized civilian population. Data collection for NHANES was approved by the National Center for Health Statistics Research Ethics Review Board. This activity was reviewed by CDC and was conducted consistent with applicable federal law and CDC policy.† Demographic and HPV vaccination information are obtained during in-home interviews. Sexual behavior information is obtained via audio computer-assisted self-interview, and self-collected cervicovaginal specimens are obtained in mobile examination centers.§ CDC determines HPV DNA genotypes from these specimens using L1 consensus polymerase chain reaction testing followed by type-specific hybridization to detect 37 HPV types¶ and β-globin (6). Samples negative for both HPV and β-globin are considered inadequate and were excluded from analysis. Data from 2003 through 2018 were analyzed in 4-year periods: 2003–2006, 2007–2010, 2011–2014, and 2015–2018. Age groups were categorized as 14–19, 20–24, 25–29, and 30–34 years. Self-reported race/ethnicity was categorized as non-Hispanic White, non-Hispanic Black, Mexican American,** or other races. Self- or parent-reported vaccination history was analyzed as ever vaccinated (receipt of ≥1 dose). Sexual behaviors analyzed included ever having had sex†† (sexually experienced) and number of lifetime sex partners (fewer than three or three or more partners§§). HPV prevalences¶¶ and 95% confidence intervals (CIs) were estimated for each 4-year period for the following type categories: 4vHPV types,*** five additional 9vHPV types,††† non-4vHPV types,§§§ and non-9vHPV types.¶¶¶ Prevalence ratios (PRs) and adjusted prevalence ratios (aPRs), comparing 2015–2018 with 2003–2006, were estimated using logistic regression. For females aged 14–19 years, estimates were adjusted a priori for race/ethnicity and ever having had sex. For females aged 20–24, 25–29, and 30–34 years, estimates were adjusted a priori for race/ethnicity and number of lifetime sex partners. Distributions of participant characteristics and behaviors were estimated for each 4-year period; 2015–2018 was compared with 2003–2006 using Wald F tests. Among sexually experienced females, 4vHPV-type prevalence in each 4-year period was estimated overall, by age group and vaccination history. Complex survey analytic methods were used to account for the survey design; analyses used examination weights.**** Statistical significance was defined as p<0.05, or 95% CIs that did not include one for PRs. Prevalence estimates with relative standard error >30% were noted for stability concerns. Data management and analysis were performed using SAS (version 9.4; SAS Institute) and SUDAAN (version 11.0; RTI International). Because the analyses required restricted-use data, the data were accessed through CDC’s Research Data Center.††††

Reported receipt of ≥1 HPV vaccine dose increased from 2007–2010 to 2015–2018 in all age groups (Table 2). The percentages of females aged 14–19 years reporting ever having had sex and three or more lifetime partners were significantly lower during 2015–2018 than during 2003–2006. Among females in older age groups, during 2003–2006 and 2015–2018, >90% reported ever having had sex; the percentage with three or more lifetime partners did not change significantly. The distribution of race/ethnicity was different in most age groups during 2015–2018 than during the prevaccine era.

Very few participants surveyed during 2017–2018 would have received 9vHPV; therefore, it is likely too early for 9vHPV vaccination to explain all of the decline in prevalence of the additional 9vHPV-type infections among females aged 14–19 years. The significant declines also in prevalences of non–4vHPV-type and non–9vHPV-type infections in this age group from the prevaccine era to 2015–2018 suggest lower exposure to HPV; this is consistent with the decrease in reported sexual behaviors from 2003–2006 to 2015–2018 in the current report. Lower exposure might have contributed to some of the observed decrease in 4vHPV-type prevalence among females aged 14–19 years. Among females aged 20–24 years, an age group with no significant changes in reported sexual behavior, a dramatic decline in 4vHPV-type prevalence from the prevaccine era to 2015–2018 occurred without significant change in non–4vHPV-type or non–9vHPV-type prevalence, demonstrating vaccine impact in the absence of potential changes in HPV exposure.

In addition to significantly lower 4vHPV-type prevalence among sexually experienced vaccinated females compared with those in the prevaccine era, 4vHPV-type prevalence was also lower among unvaccinated females: 87% in females aged 14–19 years and 65% in those aged 20–24 years. These findings suggest strong herd effects, or indirect protection of unvaccinated females, as reported in previous NHANES analyses and in data from other countries (4,7). The herd effects are likely attributable to less circulation of vaccine-type HPV because of both female and male vaccination in the United States (2,3).

The findings in this report are subject to at least three limitations. First, differences in sexual behavior were noted among females aged 14–19 years in 2015–2018 compared with 2003–2006. To account for this, prevalence ratios were adjusted for sexual behaviors, and a subanalysis was restricted to sexually experienced females; however, residual confounding might be present. Second, self- and parent-reported vaccination history could have resulted in misclassification, which might bias findings, including those related to herd effects (8). Finally, small sample size resulted in limited precision for certain subgroup analyses.

This report adds to the robust data on the impact of the national HPV vaccination program, including herd effects. In addition to decreases in the prevalence of vaccine types, decreasing rates of cervical precancers and anogenital warts also have been demonstrated in the United States and other countries after introduction of HPV vaccination (7,9). The COVID-19 pandemic has the potential to reverse gains made in HPV vaccination coverage in the United States, as indicated by lower adolescent vaccine orders in 2020 (3,10). Efforts are needed to increase HPV vaccination to maintain the substantial progress of the vaccination program. Continued monitoring in NHANES will provide information to evaluate changes in U.S. vaccination recommendations and 9vHPV vaccine introduction on HPV prevalence as well as any setbacks attributable to the COVID-19 pandemic. HPV vaccination is a critical prevention tool against HPV infection, anogenital warts, and HPV-attributable precancers and cancers. HPV vaccination is highly effective and is recommended routinely at age 11–12 years and through age 26 years for persons not already vaccinated.

¶¶ Prevalence estimates with a relative standard error of >30% were noted and considered unstable.

† All analyses were weighted using the examination sample weights.