Sexual minority persons in the United States have higher self-reported prevalences of several underlying health conditions associated with severe outcomes from COVID-19 than do heterosexual persons, both in the overall population and among racial/ethnic minority groups.

Inclusion of sexual orientation and gender identity data in COVID-19 surveillance and other data collections could improve knowledge about disparities in infections and adverse outcomes among sexual and gender minority populations, overall and by race/ethnicity. 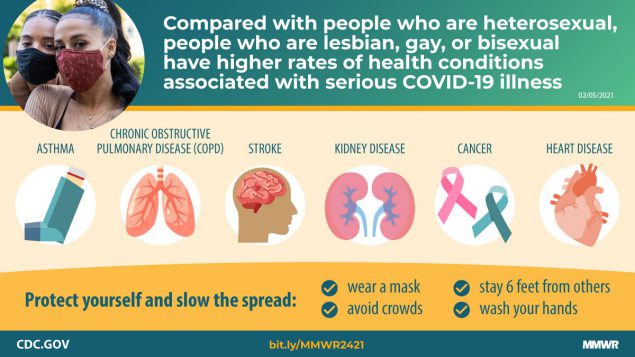 Sexual minority persons experience health disparities associated with sexual stigma and discrimination and have a high prevalence of several health conditions that have been associated with severe coronavirus disease 2019 (COVID-19) (1,2). Current COVID-19 surveillance systems do not capture information about sexual orientation. To begin bridging the gap in knowledge about COVID-19 risk among sexual minority adults, CDC examined disparities between sexual minority and heterosexual adults in the prevalence of underlying conditions with strong or mixed evidence of associations with severe COVID-19–related illness (3), by using data from the 2017–2019 Behavioral Risk Factor Surveillance System (BRFSS).* When age, sex, and survey year are adjusted, sexual minority persons have higher prevalences than do heterosexual persons of self-reported cancer, kidney disease, chronic obstructive pulmonary disease (COPD), heart disease (including myocardial infarction, angina, or coronary heart disease), obesity, smoking, diabetes, asthma, hypertension, and stroke. Sexual minority adults who are members of racial/ethnic minority groups disproportionately affected by the pandemic also have higher prevalences of several of these health conditions than do racial/ethnic minority adults who are heterosexual. Collecting data on sexual orientation in COVID-19 surveillance and other studies would improve knowledge about disparities in infection and adverse outcomes by sexual orientation, thereby informing more equitable responses to the pandemic.

For this analysis, respondents were classified as sexual minority persons (versus heterosexual persons) if they selected any of the following responses from the 2017–2019 questions on sexual orientation: “gay,” “lesbian or gay,” or “bisexual¶” (sexual minority: 24,582 [unweighted], 4.7% [weighted]; heterosexual: 619,374 [unweighted], 95.3% [weighted]). Race and ethnicity were categorized as Hispanic (any race), non-Hispanic Black, non-Hispanic White, and non-Hispanic other; the non-Hispanic other category includes non-Hispanic Asian, non-Hispanic American Indian/Alaskan Native, and non-Hispanic persons of other races/ethnicities. Adults with the following conditions are at increased risk for severe illness from COVID-19: cancer, chronic kidney disease, COPD, heart conditions, obesity, pregnancy, sickle cell disease, smoking, and type 2 diabetes mellitus (3). In addition, adults with the following conditions might be at increased risk for severe illness from COVID-19: asthma, cerebrovascular disease, cystic fibrosis, hypertension, immunocompromised state, neurologic conditions (e.g., dementia), liver disease, overweight, pulmonary fibrosis, thalassemia, and type 1 diabetes mellitus. Among these conditions with strong or mixed evidence of associations with adverse COVID-19–related outcomes (3,4), the following variables from the BRFSS core module were included: asthma (current and ever), cancer (except nonmelanoma skin cancer), COPD, heart disease (myocardial infarction, angina, or coronary heart disease) (4), diabetes, hypertension, kidney disease, obesity (current), smoking (current), and stroke. Hypertension questions were asked only in 2017 and 2019.**

Adjusted percentages and adjusted prevalence ratios (aPRs) comparing sexual minority persons and heterosexual persons with each condition were calculated overall and stratified by race/ethnicity. Using Stata (version 16.0; StataCorp) software to account for the BRFSS survey design, all estimates were adjusted for age, sex (male or female), and survey year, using multivariate logistic regression with the margins and nonlinear combination of estimators (nlcom) postestimation commands. The nlcom procedure takes nonlinear transformations of a parameter estimate from a fitted model and applies the delta method to calculate the variance. All aPRs with 95% confidence intervals that exclude 1 are considered statistically significant.

This analysis found that several underlying health conditions that increase or might increase the risk for more severe COVID-19–related illness were more prevalent among sexual minority persons than heterosexual persons, both within the overall population and within specific racial/ethnic groups. Non-Hispanic Black and Hispanic populations have been disproportionately affected by the COVID-19 pandemic in the United States, and the increased prevalence of certain risk factors among sexual minority members of these racial/ethnic minority populations is of particular concern. Because of their sexual orientation, sexual minority persons experience stigmatization and discrimination (1) that can increase vulnerabilities to illness and limit the means to achieving optimal health and well-being through meaningful work and economic security, routine and critical health care, and relationships in which sexual orientation and gender identity can be openly expressed (5). Persons who are members of both sexual minority and racial/ethnic minority groups might therefore experience a convergence of distinct social, economic, and environmental disadvantages that increase chronic disease disparities and the risk for adverse COVID-19–related outcomes.

In November 2020, CDC conducted a series of group listening sessions with representatives of advocacy and health care organizations serving sexual and gender minority communities across the United States to gather information on the effect of the pandemic on their constituents and patient populations. A major concern expressed in these sessions was that information about sexual orientation and gender identity is not standard in COVID-19 data collection systems. Privacy issues around sexual orientation and concerns about nonresponse or refusals to answer such questions have often been used as justification for not including these elements in public health surveillance and patient record systems (6); however, regarding public health surveillance systems, CDC surveys such as BRFSS, the National Health Interview Survey, and the National Survey on Family Growth have demonstrated the feasibility of collecting sexual orientation data from the civilian, noninstitutionalized population on an ongoing basis (2). Several months into the COVID-19 pandemic, several states and local jurisdictions responded to demands from advocacy organizations to begin collecting these data. For example, in July 2020, California Health and Human Services announced emergency regulations that required local health departments and service providers to collect and report voluntary data on sexual orientation and gender identity to better understand the effect of COVID-19 in these population subgroups. Illinois has included a COVID-19 module in its 2020 BRFSS that also includes questions on sexual orientation and gender identity (7). Pennsylvania, the District of Columbia, and several other jurisdictions are taking steps toward including sexual orientation and gender identity information in COVID-19–related data collection; however, these data are not yet available (6).

The findings in this report are subject to at least six limitations. First, all conditions are self-reported, and all but three (asthma, obesity, and smoking) refer to lifetime instead of current prevalence. Second, although the 3-year data set included as many as 31 states in 2019, the data are not nationally representative. Third, although BRFSS variables used in this analysis are general measures of the list of underlying health conditions identified by CDC as COVID-19 risk factors (3), they do not always reflect the clinical specificity of the condition list; for example, the diabetes question does not distinguish between type 1 and type 2 diabetes, and the heart disease variable includes conditions that might not affect COVID-19 outcomes (4). Fourth, several important underlying health conditions, such as sickle cell disease, have no corresponding variable in BRFSS. Fifth, although BRFSS includes a question on gender identity, the number of respondents identifying as transgender or nonbinary was too small for reliable estimates compared with the majority cisgender population. Finally, the large number of respondents in the aggregated non-Hispanic other race/ethnicity category could potentially obscure disparities between sexual minority and heterosexual populations within these smaller communities.

Despite the numerous studies among racial/ethnic minority groups and the increasing number of studies among sexual minority groups, examinations of health outcomes by combinations of sexual orientation and race/ethnicity remain relatively rare. Attention to potentially larger disparities at the intersections of sexual orientation and race/ethnicity is critical to ensuring health equity for all, including subpopulations whose circumstances often remain uncaptured despite acknowledgments of their distinct importance and needs. Because of longstanding social inequities and higher prevalences of several underlying health conditions, sexual minority populations might be vulnerable to COVID-19 acquisition and associated severe outcomes, and this vulnerability might be magnified when coupled with other demographic characteristics such as race/ethnicity (8). However, because data on sexual orientation are not collected in existing COVID-19 data systems, the effect of COVID-19 on sexual minority populations is unknown. This data gap underscores the need to extend COVID-19 surveillance and other studies to include measures of sexual orientation and gender identity. This recommendation is consistent with the emphasis on “key equity indicators” in the January 2021 Executive Order on Ensuring a Data-Driven Response to COVID-19 and Future High-Consequence Public Health Threats (9). Expanding sexual orientation and gender identity data collection to surveillance systems with shorter lags in data reporting could support more equitable representation of sexual and gender minority populations in public health data systems to facilitate improved decision-making during and after the pandemic.

† Health conditions were elicited by the question “Has a doctor, nurse, or other health practitioner ever told you that you have…” followed by a set of conditions, including those used in this analysis: a heart attack, also called a myocardial infarction; angina or coronary heart disease; stroke; asthma (with positive responses followed by “Do you still have asthma?”); any other type of cancer (other than skin cancer); chronic obstructive pulmonary disease, emphysema, or chronic bronchitis; kidney disease (not including kidney stones, bladder infection, or incontinence); or diabetes (followed by questions allowing separation of gestational diabetes, prediabetes, and borderline diabetes). Hypertension was assessed separately but with the same question format. Possible responses to these questions were “yes,” “no,” “don’t know/not sure,” or refused. Because coronary heart disease is the most common cause of heart attack/myocardial infarction, respondents answering affirmatively to questions about a heart attack/myocardial infarction, angina, or coronary heart disease were counted as having heart disease.