As of December 31, 2018, 15 states covered all nine evidence-based cessation treatments for all traditional Medicaid enrollees, up from six states at the end of 2008. All but two states retained coverage barriers. 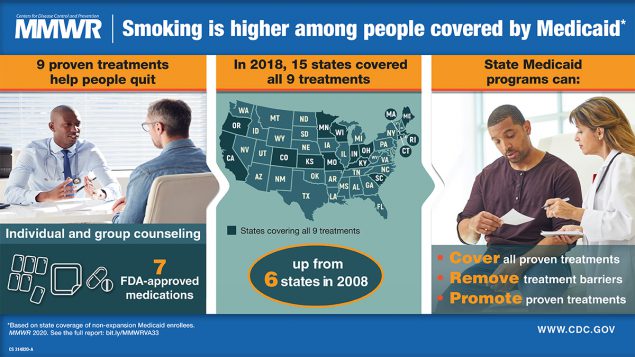 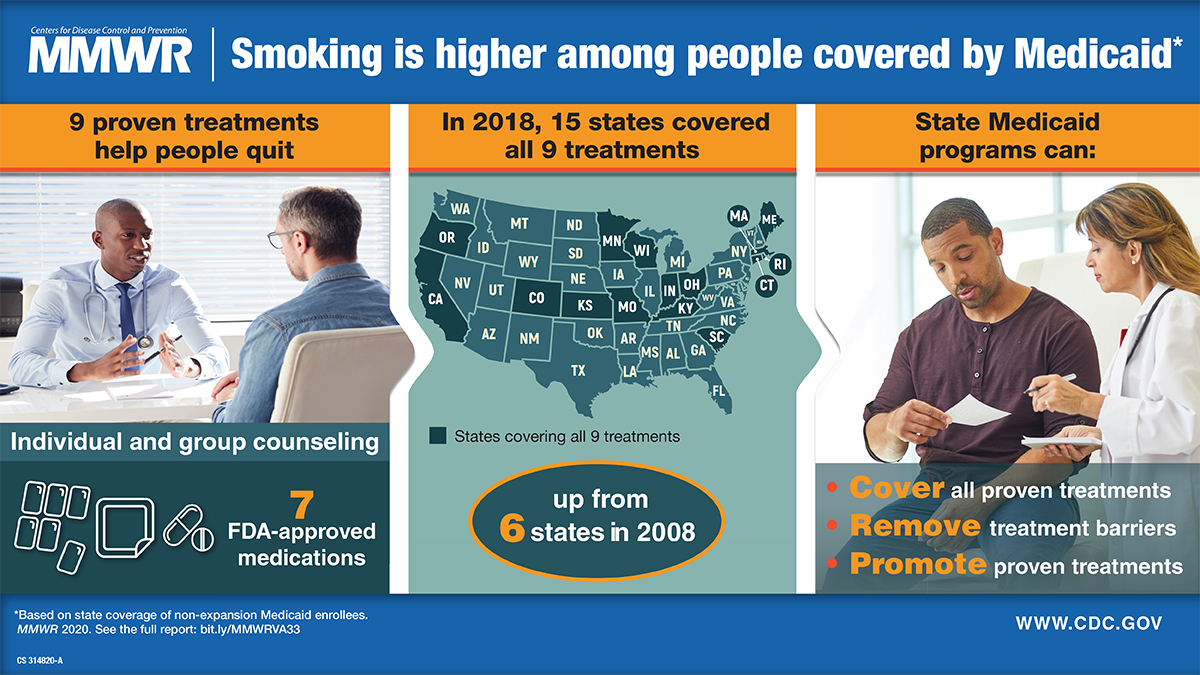 The prevalence of current cigarette smoking is approximately twice as high among adults enrolled in Medicaid (23.9%) as among privately insured adults (10.5%), placing Medicaid enrollees at increased risk for smoking-related disease and death (1). Medicaid spends approximately $39 billion annually on treating smoking-related diseases (2). Individual, group, and telephone counseling and seven Food and Drug Administration (FDA)–approved medications* are effective in helping tobacco users quit (3). Comprehensive, barrier-free, widely promoted coverage of these treatments increases use of cessation treatments and quit rates and is cost-effective (3). To monitor changes in state Medicaid cessation coverage for traditional Medicaid enrollees† over the past decade, the American Lung Association collected data on coverage of nine cessation treatments by state Medicaid programs during December 31, 2008–December 31, 2018: individual counseling, group counseling, and the seven FDA-approved cessation medications§; states that cover all nine of these treatments are considered to have comprehensive coverage. The American Lung Association also collected data on seven barriers to accessing covered treatments.¶ As of December 31, 2018, 15 states covered all nine cessation treatments for all enrollees, up from six states as of December 31, 2008. Of these 15 states, Kentucky and Missouri were the only ones to have removed all seven barriers to accessing these cessation treatments. State Medicaid programs that cover all evidence-based cessation treatments, remove barriers to accessing these treatments, and promote covered treatments to Medicaid enrollees and health care providers could reduce smoking, smoking-related disease, and smoking-attributable federal and state health care expenditures (3–7).

The number of states having none of the seven barriers to cessation treatment increased from zero to two during December 31, 2008–December 31, 2018. During this period, the number of states that did not require copayments for any cessation treatment for any traditional Medicaid enrollees approximately tripled, from 10 to 28. As of December 31, 2018, states reported that the most common barriers imposed on all or some traditional Medicaid enrollees were limits on duration of treatment (44 states, 86%), annual limits on quit attempts (37, 72%), and prior authorization requirements (35, 69%) (Table 3).

In addition, as of December 2018, all but two states retained barriers that make it more difficult for Medicaid enrollees to access cessation treatments. Removing these barriers would further increase Medicaid enrollees’ access to and use of cessation treatments (3,6). Although state Medicaid programs made considerable progress in removing copayments during the study period, progress in removing other barriers was mixed.

The findings in this report are subject to at least two limitations. First, when official documents were not publicly available or were outdated or conflicting, state government personnel were contacted for clarification; however, it was not always possible to verify the accuracy of the information they provided. Second, cessation coverage can vary widely across Medicaid managed care plans and can change with little notice, which makes determining these plans’ coverage challenging.

Approximately 6.7 million adult smokers report being enrolled in Medicaid, accounting for approximately 20% of adult U.S. cigarette smokers.**** Whereas smokers enrolled in Medicaid are as likely as are privately insured smokers to want to quit and to make a past-year quit attempt, they are less likely to succeed in quitting (9,10). Compared with smokers with private health insurance, smokers enrolled in Medicaid have been found to be more likely to have chronic diseases and to experience severe psychological distress (9). The high smoking prevalence among Medicaid enrollees imposes a substantial health burden on these persons and on society, and is a major driver of federal and state health care expenditures (3). Smoking-related diseases accounted for approximately 15% of annual Medicaid spending during 2006–2010, amounting to approximately $39 billion in 2010 (2). State Medicaid programs can help reduce this health and financial burden by covering all evidence-based cessation treatments, removing coverage barriers, and promoting covered treatments to Medicaid enrollees and providers to increase their use (3–7).

† As used in this report, the term “traditional” Medicaid enrollees refers to persons who are enrolled in Medicaid under traditional Medicaid eligibility criteria (e.g., low-income pregnant women, children and persons with a disability), as opposed to the income-only eligibility criteria (i.e. income equal or less than 138% of the federal poverty level) for coverage under expanded Medicaid, created by the Patient Protection and Affordable Care Act and implemented in 2014. https://www.healthcare.gov/medicaid-chip/getting-medicaid-chip/.

§ Telephone counseling is available free to callers to state quitlines (including Medicaid enrollees) in all 50 states and DC through the national quitline portal 1-800-QUIT-NOW and was not included in this report. In June 2011, the Centers for Medicare & Medicaid Services announced that it would offer a 50% federal administrative match to state Medicaid programs for the cost of state quitline counseling provided to Medicaid enrollees.

** Information on state Medicaid cessation coverage compiled by the American Lung Association is available in the CDC State Activities Tracking and Evaluation (STATE) System, a database that contains tobacco-related epidemiologic and economic data and information on state tobacco-related legislation (https://www.cdc.gov/statesystem). Certain data presented in this report differ slightly from Medicaid cessation coverage data reported in the STATE System because of small differences in coding rules, categories, and reporting periods.

†† As used in this report, the term “states” includes DC.

§§ These states are no longer considered to provide comprehensive Medicaid cessation coverage because of changes in coverage in their Medicaid managed care plans.

*** Patient Protection and Affordable Care Act, Pub. L. 114–48 124 Stat. 310, March 23, 2010, as amended through May 1, 2010 (https://www.congress.gov/111/plaws/publ148/PLAW-111publ148.pdf). The Centers for Medicare & Medicaid Services has issued guidance to states on implementing this provision (https://www.medicaid.gov/Medicaid-CHIP-Program-Information/By-Topics/Prescription-Drugs/Downloads/Rx-Releases/State-Releases/state-rel-165.pdf). As of December 31, 2019, the Centers for Medicare & Medicaid Services had published state plan amendments from 38 states declaring that they had implemented this provision. As of December 31, 2018, all 50 states and DC participated in the Drug Rebate program.

††† Unlike traditional Medicaid coverage, expanded Medicaid is required to include coverage without cost-sharing of preventive services receiving an A or B rating from the U.S. Preventive Services Task Force (USPSTF). Tobacco cessation intervention has received an A rating from USPSTF. https://www.ncbi.nlm.nih.gov/pmc/articles/PMC4265933/.

**** This estimate includes enrollees in both traditional and expanded Medicaid, as determined in the 2018 National Health Interview Survey conducted by CDC’s National Center for Health Statistics. https://www.cdc.gov/nchs/nhis/data-questionnaires-documentation.htm.