Prescription Opioid Misuse and Use of Alcohol and Other Substances Among High School Students — Youth Risk Behavior Survey, United States, 2019 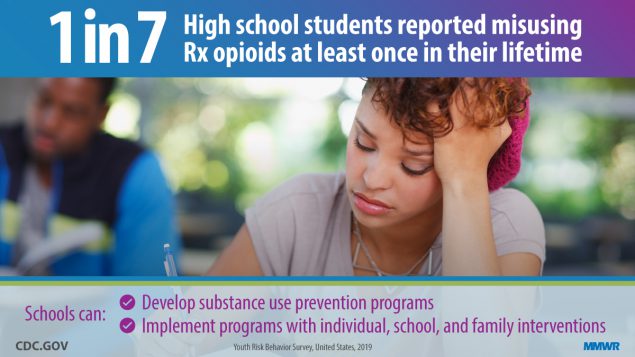 Substance use and associated adverse outcomes contribute to substantial morbidity, mortality, and economic costs to society each year in the United States (1). Data from national surveys indicate the majority of adolescents will engage in some form of substance use before they graduate from high school (https://www.samhsa.gov/data/report/2018-nsduh-detailed-tablesexternal icon). During adolescence, areas of the brain associated with emotional responses and reward systems develop before those associated with executive functioning, judgement, and decision making (2). This uneven maturation results in increased susceptibility for engaging in risky and impulsive behaviors, including substance use, and increases vulnerability to reinforcing and rewarding effects of substances (2,3). Preventing or delaying substance use initiation among youths can reduce later risk for substance use and substance use disorders (1,3,4). Beyond the individual negative effects of substance use during youth and into adulthood, substance use among youths also increases the likelihood for negative consequences that affect peers, families, and communities (5). Youth substance use is associated with increased risk for delinquency, academic underachievement, teenage pregnancy, sexually transmitted diseases, perpetrating or experiencing violence, injuries, and mental health problems (1,3–6).

As the United States confronts its decades-long opioid overdose epidemic (1,2), preventing opioid misuse among youth is a public health imperative. Previous research has documented that misuse of prescription opioids among youths is associated with multiple adverse health outcomes and risk behaviors, including use of alcohol and other illicit drugs, injection drug use, suicidal ideation, youth violence, delinquency, having four or more lifetime sexual partners, not using a condom at last sexual intercourse, increased risk for acquisition of human immunodeficiency virus infection and sexually transmitted diseases (6), and increasing overdoses (7). Studies also have demonstrated that prescription opioid misuse among youths is strongly linked with subsequent initiation and use of heroin and increased risk for injecting prescription opioids and developing an opioid use disorder (8–10).

This report includes data from CDC’s 2009–2019 Youth Risk Behavior Survey (YRBS), a cross-sectional, school-based survey conducted biennially since 1991. Each survey year, CDC collects data from a nationally representative sample of public- and private-school students in grades 9–12 in the 50 U.S. states and the District of Columbia. Additional information about YRBS sampling, data collection, response rates, and processing is available in the overview report of this supplement (11). The prevalence estimates for all substance use questions for the overall study population and by sex, race/ethnicity, grade, and sexual orientation are available at https://nccd.cdc.gov/youthonline/App/Default.aspx. The full YRBS questionnaire is available at https://www.cdc.gov/healthyyouth/data/yrbs/pdf/2019/2019_YRBS-National-HS-Questionnaire.pdfpdf icon.

Four demographic characteristics were included in the analysis: sex (male or female), race/ethnicity (non-Hispanic white [white], non-Hispanic black [black], Hispanic, or other), grade (9/10 or 11/12), and sexual identity (heterosexual; lesbian, gay, or bisexual; or not sure). Students reporting “other” race/ethnicity are included in all analyses; however, data are not presented for that group because of limited interpretability.

First, annual prevalence of each substance use behavior was estimated for all years with available data. Second, to identify temporal trends, logistic regression analyses were used to model linear and quadratic time effects while controlling for sex, grade, and racial/ethnic group changes over time; for significant quadratic time effects, Joinpoint software was used to identify the year the trend changed direction (11). Trends were assessed during 2009–2019 for current alcohol, current marijuana, lifetime marijuana, lifetime cocaine, lifetime methamphetamine, lifetime heroin, and lifetime injection drug use. Synthetic marijuana use was first assessed by YRBS in 2015; therefore, trend analysis for this variable was conducted for 2015–2019. Third, to identify 2-year changes in substance use behaviors, prevalence estimates from 2017 and 2019 were compared by using t-tests; changes were considered statistically different if the p value was <0.05.

Adjusted prevalence ratios (aPRs) and corresponding 95% CIs were calculated; estimates were considered statistically significant if the 95% CI did not include 1.0. All analyses were conducted by using SAS-callable SUDAAN (version 11.0.1; RTI International) to account for survey weights and the complex sample design of the YRBS. No imputation methods were used for data that were missing.

This report provides key insights into substance use behaviors of U.S. high school students during 2009–2019. Encouraging findings include decreasing prevalence of current alcohol use and decreases in the prevalence of lifetime use of marijuana, cocaine, methamphetamine, heroin, synthetic marijuana, and injection drug use. However, the findings in this report underscore that substance use among high school students remains common, with approximately one in three students reporting current alcohol use, one in five reporting current marijuana use, and one in seven reporting current binge drinking. Because of the ongoing U.S. opioid crisis, of particular concern are the high rates of lifetime (one in seven students) and current prescription opioid misuse (one in 14 students) and high rates of co-occurring substance use among students currently misusing prescription opioids.

Particularly noteworthy were the universally elevated rates of substance use among self-identified sexual minority youths compared with heterosexual youths, which is consistent with previous research (12). In addition to findings regarding broader substance use patterns, this report provides actionable information on prescription opioid misuse among high school students that can be applied to ongoing efforts for preventing opioid misuse, use disorders, and overdoses. Specifically, the high rates of co-occurring substance use, especially alcohol and marijuana use, among students currently misusing prescription opioids highlights the importance of prevention efforts that focus on general substance use risk and protective factors. Notably, these associations are not limited to high school students because binge drinking and marijuana use are associated with increased prescription opioid misuse among both adults and adolescents (13). Finally, sexual minority youths also had significantly higher prevalence of current prescription opioid misuse even after controlling for other demographic and substance use characteristics, which is consistent with their overall pattern of higher rates of substance use in this study. It also further emphasizes the importance of identifying tailored prevention strategies to address disparities among this vulnerable population.

Scientific evidence for the effective prevention of substance use indicates the importance of interventions that target risk and protective factors at the individual, family, and community levels to maximize their public health impact (1–3). Risk factors include adverse childhood experiences at the individual level, limited parental monitoring and involvement and active substance use in the home at the family level, and easy availability and accessibility to alcohol and other substances and community norms favorable toward use of alcohol and other substances at the community level (1,2,5). In addition, studies have demonstrated that youth alcohol use is associated with adult alcohol use, and that both community-level and individual-level alcohol use are affected by population-level alcohol policies (e.g., those that reduce the availability and accessibility of alcohol and increase its price) (14).

The ability to reach young persons during early elementary ages, before they begin using substances, and throughout adolescence makes the school environment well-suited for prevention programming. School-based substance use prevention programs that focus on broad-based skill building (e.g., psychosocial development, life-skills development, and social-emotional learning and connectedness) have greater promise than substance-specific programs (15,16). In addition, multifaceted programs that incorporate aspects of individual, school, and family interventions (e.g., the Promoting School-community-university Partnerships to Enhanced Resilience [PROSPER] program and Communities That Care [CTC]) have demonstrated effectiveness at reducing or preventing youth substance use (17,18).

Broader prevention policies for changing the environment in which youths live (e.g., those that reduce the availability of substances) can also be used as part of a comprehensive approach for reducing youth substance use. The U.S. Community Preventive Services Task Force recommends certain population-level strategies (e.g., increasing alcohol taxes and regulating the number and concentration of places that sell alcohol as interventions for reducing excessive alcohol use, including alcohol use among youths) (https://www.thecommunityguide.org/resources/what-works-preventing-excessive-alcohol-consumptionexternal icon). Enhanced enforcement of existing substance use policies (e.g., prescription drug monitoring programs that are used universally with near–real-time data and laws prohibiting sales of alcohol to persons aged <21 years) also can help reduce substance use among youths (19,20). In addition, strategies for expanding access to evidence-based pain treatment and improving prescribing of prescription opioids through safer prescribing practices can help reduce opioid misuse and overdoses. Improving opioid prescribing can have dual benefits by reducing the environmental availability of prescription opioids for diversion and misuse and reducing the risk for misuse associated with the prescription of opioids to youths (2).

General limitations for the YRBS are available in the overview report of this supplement (11). The findings in this report are subject to at least three additional limitations. First, the questions assessing lifetime and current prescription opioid misuse refer to prescription pain medicine; however, the questions provide examples of opioid-containing prescription medications only. Therefore, if students considered nonopioid prescription pain medications when answering, an overestimation of prescription opioid misuse prevalence might have occurred. Second, many of the substance use questions included common street names for drugs; however, newly introduced street names or street names specific to certain geographic areas were not included, which might have resulted in underreporting of substance use behaviors. Finally, there was variation in the amount of missing data for some substance use variables (e.g., the largest amount missing was for current prescription opioid misuse [5,000 missing observations]). Missing data might result from a variety of factors, such as students choosing not to answer questions or inconsistent responses to similar questions that are set to missing during the data cleaning process (11). In addition, schools selected to participate in the national YRBS and in a state or local YRBS only complete the local version of the survey; as a result, questions included on the national survey but not the local survey are set to missing.

The findings in this report indicate that youth substance use has declined in recent years; however, substance use, including misuse of prescription opioids, remains common among U.S. high school students. Opportunities exist for bringing to scale evidence-based policies, programs, and practices that aim to reduce risk factors and strengthen protective factors among youths in conjunction with initiatives already underway for combating the U.S. opioid overdose epidemic. Disproportionately affected populations (e.g., sexual minority youths) might benefit from tailored substance use interventions combined with more widespread implementation of broader population-level policy strategies.

Abbreviation: NA = not available.
* Based on trend analyses by using a logistic regression model controlling for sex, race/ethnicity, and grade (p<0.05).
† Based on t-test analysis (p<0.05).
§ Previous 30 days before the survey.
¶ Insufficient years of data to assess trends.

Abbreviation: CI = confidence interval.
* Adjusted prevalence ratios were calculated from a single logistic regression model that included all covariates listed in this table.