The Surgeon General has concluded that there is a causal relationship between depictions of smoking in movies and the initiation of smoking among young persons. 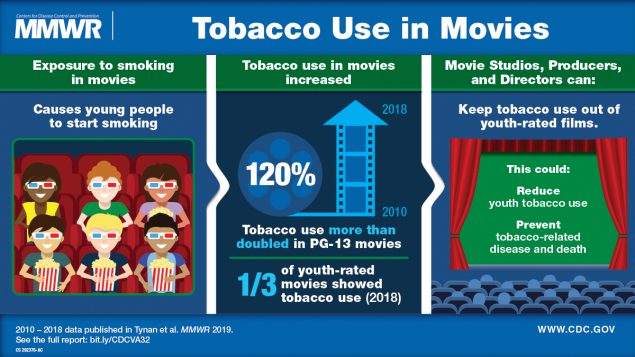 Breathe California counts tobacco incidents, defined as the use or implied use of a tobacco product (i.e., cigarettes, cigars, pipes, hookahs, smokeless tobacco products, or electronic cigarettes), in U.S. top-grossing movies (movies ranking among the top 10 in theatrical gross receipts for at least 1 week), which account for 98% of U.S. movie ticket sales (3). Consistent with previous reports on this topic (3–5), this analysis is based upon assessments of movies for tobacco use by at least two independent monitors; any differences were resolved by a supervisor who independently assessed the movie using the same protocol.§

All major motion picture companies have policies to reduce tobacco depictions in youth-rated movies¶; however, Disney and Viacom were the only companies with no tobacco use in youth-rated movies in 2018. Paid placement of tobacco brands is prohibited in media such as movies, television, and video games by the 1998 Master Settlement Agreement between states and tobacco companies.** Public health groups have suggested interventions to reduce tobacco imagery in movies, such as the Motion Picture Association of America assigning an R rating to any movie with tobacco imagery, unless it portrays an actual historical figure who used tobacco or depicts the negative effects of tobacco use (6–8). Research suggests that such an R rating, in coordination with additional interventions, could help eliminate tobacco incidents in youth-rated movies (6–8) and reduce youth cigarette smoking by an estimated 18% (6,9).

Establishing the impact of youths’ exposure to tobacco imagery through movies (as well as original programming on television, streaming and on-demand services, and social media) and the effects of this exposure on youths’ tobacco use is important. A recent survey of streaming content popular with young persons and analysis of two full seasons of 14 programs identified at least one tobacco incident in 86% of programs (10), even as tobacco incidents have begun to decline in fictional theatrical feature films. Reducing the reach of tobacco incidents in streaming and other media platforms is essential to protect youths from exposures that can normalize tobacco use. Continued research will be necessary to understand how this exposure affects youth tobacco initiation and use (10).

The findings in this report are subject to at least two limitations. First, detailed audience composition data are not publicly available, so the number of tobacco-use impressions delivered by a particular movie to specific populations (e.g., children and adolescents) could not be determined. Second, the measure to assess tobacco exposure from movies should be interpreted cautiously because movies can be viewed through other media platforms that do not contribute to the calculation of in-theater impressions (e.g., physical discs, broadcast or cable television, and video-on-demand services).

Tobacco related incidents in youth-rated movies remained common, particularly in biographical dramas. The majority of persons using tobacco in these biographical dramas were fictional, not historical, figures. Studios could limit tobacco use in biographical dramas to real persons who actually used tobacco. Other evidence-based solutions could be implemented by producers and distributors of youth-rated entertainment to reduce the public health risk caused by exposure to on-screen tobacco imagery. For example, assigning all movies with tobacco incidents an R rating could eliminate tobacco product imagery from youth-rated films, which could further reduce initiation of tobacco product use among U.S. youths.

All authors have completed and submitted the International Committee of Medical Journal Editors form for disclosure of potential conflicts of interest. Jonathan Polansky, Danielle Driscoll, Claire Garcia, and Stanton Glantz report grants from Truth Initiative during the conduct of the study. Stanton Glantz also receives funding from the National Institutes of Health. No other potential conflicts of interest were disclosed.

* Ratings assigned by the Motion Picture Association of America (a trade organization that represents the major movie studios) include General Audiences (G): all ages admitted; Parental Guidance Suggested (PG): some material may not be suitable for children; Parents Strongly Cautioned (PG-13): some material may be inappropriate for children under 13; and Restricted (R): under 17 requires accompanying parent or adult guardian.

* MPAA, the trade organization that represents the six major movies studios, assigns ratings: G = General Audiences (all ages admitted); PG = Parental Guidance Suggested (some material may not be suitable for children); PG-13 = Parents Strongly Cautioned (some material may be inappropriate for children under 13); R = Restricted (under age 17 requires accompanying parent or adult guardian).
† Independent movie companies include producer-distributors that are not members of MPAA, but regularly adhere to MPAA ratings and advertising rules.
§ Youth-rated movies include G, PG, and PG-13.

Abbreviation: PG-13 = Parents Strongly Cautioned (some material may be inappropriate for children under age 13 years).

* Ratings are assigned by the Motion Picture Association of America, the trade organization that represents the six major movie studios.

† Production details in movie industry databases and trade publications were used to classify the top-grossing movies as works of fiction or biographical dramas.

* Ratings are assigned by MPAA, the trade organization that represents the six major movies studios: G = General Audiences (all ages admitted); PG = Parental Guidance Suggested (some material may not be suitable for children); PG-13 = Parents Strongly Cautioned (some material may be inappropriate for children under 13); R = Restricted (under age 17 requires accompanying parent or adult guardian).