Use of Electronic Vapor Products Before, During, and After Pregnancy Among Women with a Recent Live Birth — Oklahoma and Texas, 2015

In 2015, 7.0% of women with a recent live birth in Oklahoma and Texas reported using EVPs shortly before, during, or after pregnancy, with 1.4% reporting use during pregnancy. Among prenatal EVP users, 38.4% reported using EVPs containing nicotine, and 26.4% did not know if the EVPs they used contained nicotine.

Messages that EVPs are not safe to use during pregnancy need to be clearly communicated. Education, counseling, and evidence-based cessation treatment could assist reproductive-aged women in preventing or reducing the use of all tobacco products, including EVPs. 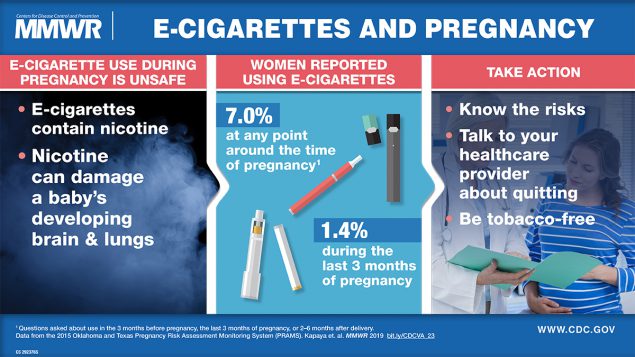 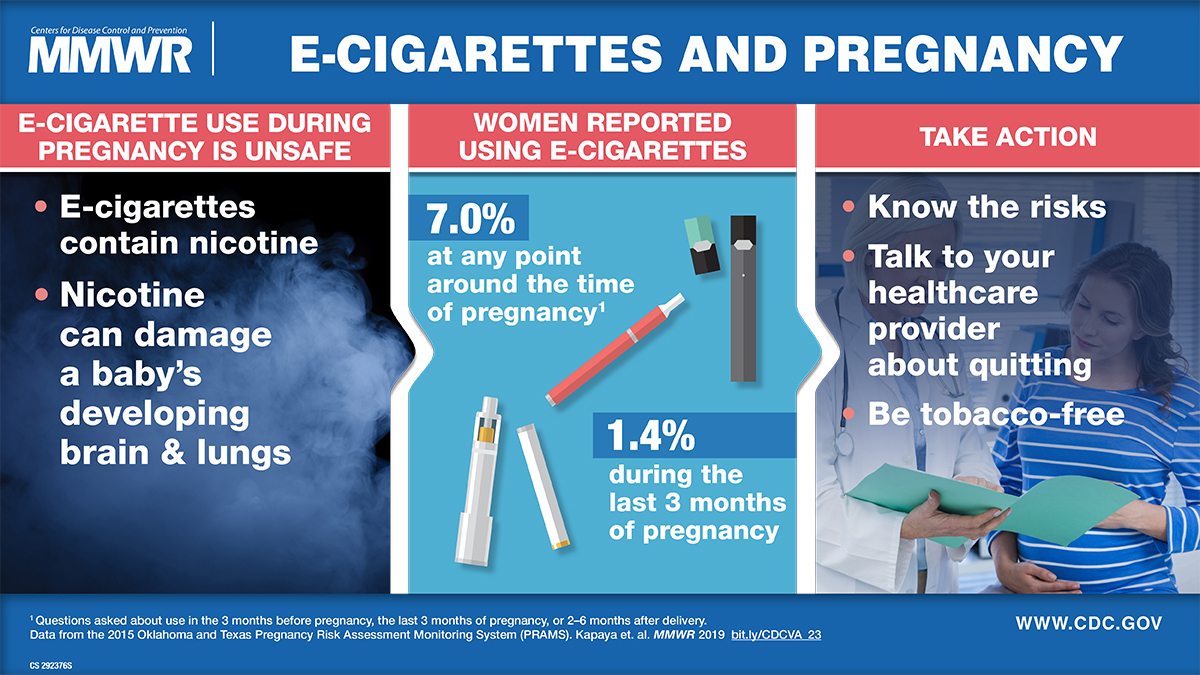 PRAMS is a state- and population-based surveillance system designed to monitor selected self-reported behaviors and experiences before, during, and after pregnancy among women who have had a recent live birth. Participating states select a stratified random sample of women from birth certificate records and survey them by mail 2–6 months after delivery. Women who do not respond to the mailed survey are followed up by telephone.* Oklahoma and Texas included supplementary questions on EVPs on their PRAMS questionnaire in 2015, and data from responses were analyzed for this report. Data were weighted to adjust for noncoverage and nonresponse and represent the total population of women with a live birth in each state in 2015. Weighted response rates were 68% for Oklahoma and 56% for Texas. The sample included 3,277 women, including 1,955 (60%) from Oklahoma and 1,322 (40%) from Texas.

EVP use >3 months before pregnancy was ascertained by counting the number of women who responded affirmatively to the question “Have you ever used electronic vapor products, even one time?” (excluding those who reported use 3 months before, during, and shortly after pregnancy). EVP use around the time of pregnancy was ascertained by responses to questions about three specific time frames: 1) 3 months before pregnancy (“During the 3 months before you got pregnant, on average, how often did you use electronic vapor products?”); 2) during the last 3 months of pregnancy (“During the last 3 months of your pregnancy, on average, how often did you use electronic vapor products?”); and 3) 2–6 months after delivery (at the time the survey was administered) (“Since your new baby was born, on average, how often do you use electronic vapor products that contain nicotine?”). Reasons for EVP use were ascertained from a list of nine options.† Cigarette smoking around the time of pregnancy was assessed among women who reported any cigarette smoking in the past 2 years. Among women who reported having ever used EVPs and having smoked cigarettes in the past 2 years, dual use of EVPs and cigarettes was estimated for each of the three periods.

Weighted prevalence estimates and 95% confidence intervals (CIs) were calculated overall and by state, using SUDAAN (version 11.0, RTI International) to account for the complex sampling design of PRAMS. Chi-squared tests were used to compare differences in the prevalence of EVP use between cigarette smokers and nonsmokers. P-values <0.05 were considered statistically significant. Overall, among 3,277 women with a recent live birth, 2,533 (82.6%) had never used EVPs; 459 (10.4%), including 15.8% in Oklahoma and 9.7% in Texas, had used EVPs >3 months before pregnancy, but had not used them around the time of pregnancy (Table). The prevalence of EVP use around the time of pregnancy was 7.0% overall (10.3% in Oklahoma and 6.5% in Texas). EVP use during the last 3 months of pregnancy was 1.4% (3.2% in Oklahoma and 1.1% in Texas). Among women who used EVPs during the last three months of pregnancy, 38.4% reported using EVPs containing nicotine, 35.2% reported using EVPs that did not contain nicotine, and 26.4% did not know about the nicotine content of the EVPs they used.

These findings build on prior studies assessing use of tobacco products, including EVPs, among pregnant women (3–5) by highlighting the prevalence of EVP use, reasons for EVP use, and dual cigarette and EVP use in a large population-based sample. The current study confirms that, although EVPs are not safe to use during pregnancy (1,2), 7.0% of women (approximately one in 15 women) in Oklahoma and Texas who had a recent live birth used EVPs around the time of pregnancy; moreover, EVP use was higher among women who had smoked cigarettes in the past 2 years. Among women who smoked cigarettes in the past 2 years and had ever used EVPs, dual use of EVPs and cigarettes was higher in the 3 months before pregnancy and lower during the last 3 months of pregnancy and the 2–6 months after delivery.

This study’s findings that 10% of women with a recent live birth used EVPs >3 months before becoming pregnant and 1.4% used them during the last 3 months of pregnancy differ from findings of the Population Assessment of Tobacco and Health (PATH) Study, which found that nearly twice as many (18.4%) pregnant women were former e-cigarettes users, and 4.9% reported use during pregnancy (3). The prevalence in the current study was likely lower because the PATH Study, a large nationally representative household-based study, assessed use during the entire pregnancy, rather than the last 3 months. Nevertheless, both studies found that a higher proportion of cigarette smokers used EVPs than did nonsmokers.

Although aerosol from EVPs contains lower levels of toxicants than does cigarette smoke (1,6), EVPs are not safe to use during pregnancy because most contain nicotine (7). Nicotine, a developmental toxicant, adversely affects pregnancy and infant outcomes (2). Although the U.S. Preventive Services Task Force has determined that, currently, insufficient evidence exists to recommend EVPs for tobacco cessation among adults (including pregnant women) (8), many women report using EVPs in an attempt to quit smoking cigarettes around the time of pregnancy (4,5).

Barrier-free smoking cessation strategies with established effectiveness and safety need to be made available to all pregnant women (2). Behavioral intervention is a first-line treatment to help pregnant women quit smoking (2,8). In addition, Food and Drug Administration–recommended pharmacotherapy products (including nicotine replacement therapy), can be considered during pregnancy with close supervision of a clinician (2,8); these products don’t contain the other harmful substances that have been found in the aerosol emitted from EVPs (1,6). However, variation in coverage provided by health insurance payers might prohibit access to effective treatment. In Texas, for example, women with Medicaid coverage have access to the full range of cessation interventions, with the exception of group and individual counseling, for which coverage varies by plan. In Oklahoma, Medicaid covers all treatment options except group counseling.§ In addition, the Oklahoma Tobacco Helpline (1-800-QUIT NOW), a statewide, free, 24/7 tobacco cessation helpline, offers various options to aid in cessation efforts. In Texas, the toll-free Quitline phone number, 1-877-YES-QUIT was part of the resource list provided to mothers selected for the 2015 PRAMS survey. In both Oklahoma and Texas, all plans in the Health Insurance Marketplace are required to cover tobacco cessation treatment; however, specific coverage varies by plan. In both states, private insurance plans are not required to cover cessation treatment, which could limit options available to some women.

The findings in this report are subject to at least three limitations. First, because data were self-reported postpartum, they are subject to recall and social desirability biases, which might result in underestimates of EVP use and cigarette smoking. Second, these data are only representative of women with a recent live birth in Oklahoma and Texas. Finally, because EVPs are an emerging product, these point-in-time estimates from 2015 might not reflect trends in use in Oklahoma and Texas in more recent years, including the use of increasingly popular EVPs shaped like USB flash drives, including JUUL, that contain very high levels of nicotine (9).

Among women with a recent live birth, many reported use of EVPs. Moreover, among those who used EVPs, a substantial percentage used EVPs in an attempt to quit smoking cigarettes, suggesting a possible lack of awareness of, or access to, evidence-based approaches to smoking cessation. Messages that EVPs are not safe to use during pregnancy and that nicotine adversely affects fetal development and infant outcomes need to be clearly communicated. Health care providers can offer education, counseling, and evidence-based cessation treatment to prevent use of all tobacco products, including EVPs, by women before, during, and after pregnancy.

FIGURE 1. Percentage of women using electronic vapor products (EVPs) and cigarettes 3 months before pregnancy, during the last 3 months of pregnancy, or 2–6 months after delivery, among women with a recent live birth who smoked cigarettes in the last 2 years and ever used EVPs (N = 518) — Pregnancy Risk Assessment Monitoring System, Oklahoma and Texas, 2015

FIGURE 2. Percentage of women with a recent live birth who reported a reason for using electronic vapor products (EVPs) >3 months before pregnancy (even once) and around the time of pregnancy,* by most frequently reported reasons — Pregnancy Risk Assessment Monitoring System, Oklahoma and Texas, 2015