Subjective cognitive decline (SCD) is a form of impairment in which more frequent or worsening confusion or memory loss can affect the ability to care for oneself.

Adults with confusion or memory loss should talk to a health care professional who can assess cognitive decline and address possible treatment of symptoms, management of other co-occurring chronic health conditions, advance care planning, and caregiving needs, and who ensures that the patient receives appropriate information and referrals. 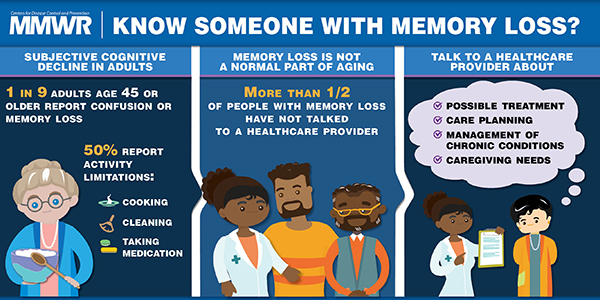 Subjective cognitive decline (SCD) is the self-reported experience of worsening or more frequent confusion or memory loss within the previous 12 months (1,2) and one of the earliest noticeable symptoms of Alzheimer’s disease (Alzheimer’s), a fatal form of dementia (i.e., a decline in mental abilities severe enough to interfere with everyday life) (1). Alzheimer’s is the most common form of dementia, although not all memory loss results from Alzheimer’s (3). To examine SCD, CDC analyzed combined data from the 2015 and 2016 Behavioral Risk Factor Surveillance System (BRFSS) surveys. Overall, 11.2% of adults aged ≥45 years reported having SCD, 50.6% of whom reported SCD-related functional limitations. Among persons living alone aged ≥45 years, 13.8% reported SCD; among persons with any chronic disease, 15.2% reported SCD. Adults should discuss confusion or memory loss with a health care professional who can assess cognitive decline and address possible treatments and issues related to chronic disease management, medical care, and caregiving.

BRFSS is a state-based, random-digit–dialed telephone survey of noninstitutionalized adults aged ≥18 years in all 50 states, the District of Columbia (DC), and several U.S. territories.* The six-question cognitive decline module (optional for states in 2015 and 2016) examines how SCD affects the life of respondents aged ≥45 years, including difficulties performing activities or caring for themselves. Overall, 49 states (all except Pennsylvania), Puerto Rico, and DC administered the module in one or both years. For five states that administered the module in both years, only 2016 data were included in this analysis. For the BRFSS surveys in 2015 and 2016, the overall combined landline and cellular telephone response rates among states, Puerto Rico, and DC ranged from 30.7% to 65.0% (median = 47.1%).†

Respondents who answered affirmatively to the question “During the past 12 months, have you experienced confusion or memory loss that is happening more often or is getting worse?” were classified as having SCD. Respondents with SCD were asked if SCD caused them to give up day-to-day activities such as cooking, cleaning, taking medications, driving, or paying bills; how often they needed and could receive necessary assistance with those activities; how often SCD interfered with their ability to work, volunteer, or engage in social activities; and whether they had discussed SCD with a health care professional. Respondents who reported “always,” “usually,” or “sometimes” (as opposed to “rarely” or “never”) giving up day-to-day activities or interference with ability to work, volunteer, or engage in social activities were classified as having SCD-related functional limitations.

SCD can be a symptom of early-stage dementia conditions, including Alzheimer’s (1,2). Not everyone who reports SCD will develop dementia, but some studies have shown that half of older adults with subjective memory complaints go on to develop more severe cognitive decline within 7–18 years (1,4,5). Even without progression to more severe cognitive impairment, SCD might signify a decreased ability for self-care. Inability to perform activities important to daily living such as preparing meals or managing money affect the ability to live independently and might also affect the ability to socialize or remain fully employed.

These findings are similar to those from an analysis of persons aged ≥60 years in 21 states from the 2011 BRFSS survey, which found a 12.7% prevalence of SCD (6). In that study, the highest prevalence was among Hispanics (16.9%) and the lowest was among non-Hispanic blacks (11.8%), in contrast to the current study, which found the highest prevalence among non-Hispanic American Indians and Alaska Natives (19.6%) and the lowest among non-Hispanic Asians or Native Hawaiians/Other Pacific Islanders (6.8%). The inclusion of additional states and the expansion of the age groups might have contributed to these differences.

Younger adults might be more likely to attribute limitations in their lifestyle to SCD or might be more sensitive to its effects. Conversely, older adults might be less aware of the effects of SCD or consider it a normal part of aging. Among persons aged 45–54 years, 10.4% reported SCD, and 59.8% of those persons reported SCD-related limitations that affected work, household chores, or social activities. Although Alzheimer’s is rare in persons aged <65 years, the finding of SCD and related functional limitations among younger adults could indicate early symptoms of cognitive decline that can be a precursor to memory disorders and dementia like Alzheimer’s. These functional limitations might have important health and economic impacts. Adults aged 45–54 years are in their prime working years, when salaries peak, workers are most productive, and when workers contribute to their retirements and consume goods and services (9). An inability to work during these years might have financial implications for these adults and their families. Persons with SCD-related functional limitations might have to reduce their time working or leave the workforce entirely; in this study, nearly three fourths of those with a functional difficulty reported that SCD interfered with their ability to engage in activities outside the home, including working.

The findings in this report are subject to at least three limitations. First, data on SCD are self-reported. Whereas the SCD module was cognitively tested, it is not administered alongside an objective measure of cognitive performance. Therefore, the accuracy of the reports of SCD is unknown. Second, response bias might affect response to SCD questions and might underestimate SCD prevalence. Finally, BRFSS is not administered to persons with known cognitive problems who might not generate reliable data. In addition, BRFSS is only administered to noninstitutionalized adults, excluding adults living in long-term care facilities, where a proportion of residents have SCD. Therefore, these results cannot be used to estimate the prevalence of SCD across all U.S. populations.

Cognitive decline is an important public health issue affecting older adults, their families, and their caregivers, as well as the economy and health care system. As a precursor to dementia, including Alzheimer’s, SCD can impair a person’s ability to care for themselves by limiting their ability to work, particularly those adults who report SCD in their prime working years (i.e., 45–54 years). Estimating the prevalence of SCD might allow states to plan for those who might develop dementia in the future.

Abbreviation: CI = confidence interval.
* Includes all states except Pennsylvania.
† Unweighted sample of respondents. Categories might not sum to the sample total because of missing responses.
§ Weighted percentage and 95% CI.
¶ All persons who reported a racial group were non-Hispanic. Those who reported Hispanic ethnicity might be members of any racial group.

Abbreviation: CI = confidence interval.
* Includes all states except Pennsylvania.
† Unweighted sample of respondents. Categories might not sum to the sample total because of missing responses.
§ Weighted percentage and 95% CI.