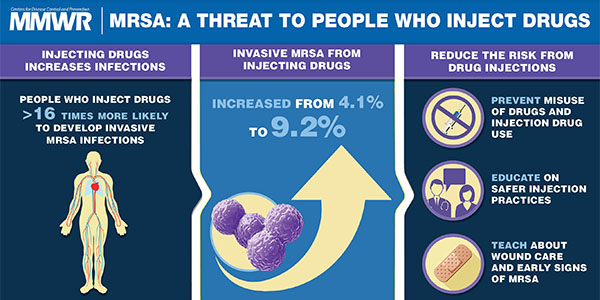 Active, population-, and laboratory-based surveillance data collected through the Healthcare-Associated Infections/Community Interface (HAIC) component of CDC’s EIP during 2005–2016 were analyzed to assess the effects of the opioid epidemic on invasive MRSA infection. A case was defined as the isolation of MRSA from a normally sterile site (e.g., blood, cerebrospinal fluid, or bone) from a surveillance area resident. National invasive MRSA disease prevalence (adjusted for age, race, sex, and dialysis) among persons aged ≥13 years who inject drugs and among persons aged ≥13 years who do not inject drugs were estimated for 2011 from EIP/HAIC data using a previously described method (8); invasive MRSA rates per 100,000 persons in both groups (and the corresponding rate ratio) were calculated in conjunction with a published population point estimate of the U.S. population aged ≥13 years who injected drugs in the previous year for 2011 (9). The six-site surveillance area used for the remainder of this report included California (three counties); Connecticut (statewide); Georgia (eight counties); and Minnesota, New York, and Tennessee (one county each). Demographic characteristics and clinical diagnoses of invasive MRSA cases among persons who inject drugs were compared with those among persons who do not inject drugs. The proportion of invasive MRSA cases that occurred among persons who injected drugs (among all invasive MRSA cases) was calculated overall and by site for each year; significance of trends was analyzed using linear regression. P values <0.05 were considered statistically significant. Among invasive MRSA cases occurring in persons who inject drugs, demographics and health care–associated risk factors for cases ascertained during 2005–2010 were compared with those that occurred during 2011–2016 to describe changes over time. Health care–associated risk factors include specimen collection for culture >3 days after hospital admission; dialysis, hospitalization, surgery, or long-term care residency in the 12 months preceding culture; and/or presence of a central venous catheter ≤2 days before invasive MRSA culture collection. Cases among persons with none of these risk factors were considered community-associated. Trends in the proportion of invasive MRSA cases that occurred among persons who inject drugs also were assessed in three sites that reported data from 2005–2014 only (Colorado and Maryland [one county each]; Oregon [three counties]).