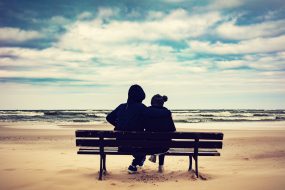 At first, we had no idea what was wrong with our daughter. It was her senior year in high school when she became ill and started missing school. Her illness presented with extreme fatigue and caused an inability to attend school. She pretty much couldn’t get out of bed in the morning. Over time, other symptoms also appeared, or, they were simply recognized. It looked like a viral illness of some kind. Her pediatrician of many years saw her several times but didn’t know what to do. She just didn’t recover from it in the usual way. We had no idea that she would have a serious and prolonged illness. She didn’t suffer from depression as a primary disorder but did become periodically depressed from all she was going through.

It should be mentioned that three of the experts treating her are located in other cities. Sometimes we drive; sometimes we fly. Sometimes it’s a quick trip; sometimes not. Travelling exhausts her. It usually requires a wheelchair, especially for long transits through airports. It tires us. We are away from work. It costs money and there not only is no such thing as reimbursement when travel is needed for medical care, but care may be outside of our provider network as well. Oh, did I mention fighting tooth and nail with pharmacies over drugs prescribed as well? In our experience some pharmacies have refused to provide certain medications but you just fight and don’t give up. Yes, it’s another feature of the disease. There’s no accepted treatment. Diagnoses have to be made for each component of the overall syndrome separately.

How has this impacted her life? Well, she is extremely limited and it impacts her both physically and mentally in what she can do. Her illness varies over time. For example, going to school was difficult. It was also difficult emotionally for her to see her peers move forward. She was accepted at a prestigious university but had to turn it down and eventually went to a school close to our house. Instead, she made choices that she could pursue and struggled against everything to do so. She took a couple of courses at a time and struggled with illness and fatigue. She had a very limited social life, but still managed to do things with her friends. She’s almost through with her undergraduate degree now and wants to apply to medical schools. Her application is going to look different from the others they get. Her situation certainly will.

How did this impact our lives? It was heartbreaking. Heartbreaking for my wife and me to see her go through this. We took care of her at home. We were, and are, consumed with finding specialists who can help her. I have continually, obsessively, researched the medical literature to try and find something that would explain her illness and, eventually, help her.

Her illness with CFS has also impacted us in that the constant management is overwhelming and a huge time burden. We are always working on medical visits, insurance, medications, and looking for new research. While our friends are supportive, I don’t want people to ask me all the time how it is going—it is sometimes too tiresome to explain and give updates. It is constantly on our minds. In the meantime, we continue. Everything that can be gained is attempted. Morale is maintained through small gains and gradual progress. Setbacks are accepted, with difficulty. Things are tried. Tomorrow there may be something new.

Postscript note: Since we started this project, she has completed her undergraduate degree and her activity level has improved substantially. She still clings to the hope of medical school and her empathy for others has only increased through her personal experiences. It should also be noted that nothing said in the first part of this article is in any manner diminished by these positive events. My daughter has suffered terribly with her illness. And others are now going through the same ordeal. The day to day crushing setbacks and disappointments, large and small, take a toll.