People who get sick after being exposed to Legionella can develop two different illnesses, collectively known as legionellosis: Legionnaires’ disease and Pontiac fever.

Legionnaires’ disease is very similar to other types of pneumonia (lung infection), with symptoms that include: 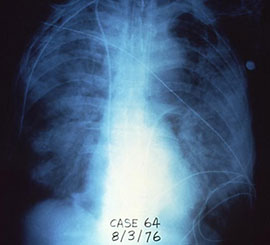 Legionnaires’ disease symptoms are similar to other types of pneumonia and it often looks the same on a chest x-ray.

Legionnaires’ disease can also be associated with other symptoms such as diarrhea, nausea, and confusion. Symptoms usually begin 2 to 10 days after being exposed to the bacteria, but it can take longer so people should watch for symptoms for about 2 weeks after exposure.

If you develop pneumonia symptoms, see a doctor right away. Be sure to mention if you may have been exposed to Legionella, have used a hot tub, spent any nights away from home, or stayed in a hospital in the last two weeks.