Listed below are answers to common background questions that reporters have about legionellosis. Contact CDC’s Media Relations office with additional questions.

Q: Can CDC confirm if there are Legionnaires’ disease cases in my state?

Q: When does CDC get involved in responding to outbreaks of Legionnaires’ disease or Pontiac fever? 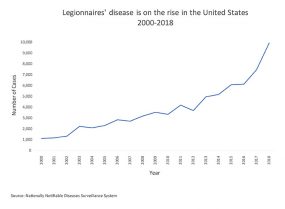 In the United States, the rate of reported cases of Legionnaires’ disease has grown by nearly nine times since 2000.

It is unclear whether this increase represents artifact (due to increased awareness and testing), increased susceptibility of the population, increased Legionella in the environment, or some combination of factors.

A: State or territorial public health officials typically invite CDC to assist with an investigation when they need additional expertise, capacity, or resources. For information about a current outbreak, contact the state, territorial, or local health department where the outbreak is occurring.

Q: How common is Legionnaires’ disease?

Q: Is Legionnaires’ disease on the rise?

A: In general, the number of cases reported to CDC has been on the rise since 2000. This may reflect a true increase in the frequency of disease due to a number of factors (e.g., older U.S. population, more at-risk people, aging plumbing infrastructure, climate). It may also be in part a result of increased use of diagnostic testing or better reporting.

Q: Where does Legionnaires’ disease occur most often in the United States?

A: The rate of reported Legionnaires’ disease cases tends to be higher in the Mid-Atlantic and Northeastern Central regions than in the South and West. Researchers are not certain why that is, but it is likely related to a combination of factors.