Many wild birds can have the same diseases as pet birds, but for more information about wild birds, visit the wildlife page. 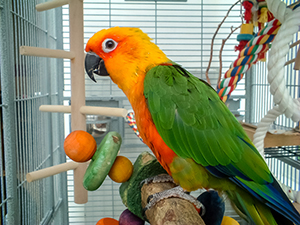 Feathered pets like parrots can be fascinating additions to the family. Recent estimates say that over 5 million households in the United States have pet birds. Bird owners should be aware that although their pets might be highly intelligent and fun companions, they can sometimes carry germs that can make people sick.

Although rare, germs from birds can cause a variety of illnesses in people, ranging from minor skin infections to serious illnesses. One of the best ways you can protect yourself from getting sick is to thoroughly wash your hands with running water and soap after you touch birds, their droppings, or items in their cages.

By providing your pet with routine veterinary care and following the Healthy People tips, you are less likely to get sick from touching or owning a pet bird.

Read below about diseases that can be spread by pet birds. These diseases can be carried by any type of pet bird you have. Visit the Healthy People section to learn more about staying healthy around pet birds.

Cryptococcosis is an infection caused by fungus found in the environment, particularly in soil, on decaying wood, in tree hollows, or in bird droppings.

How it spreads: People can get cryptococcosis by breathing in the microscopic fungus from the environment.

Who is at risk: Cryptococcosis is extremely rare in healthy people. It most often affects people with weakened immune systems.

Symptoms in people: Symptoms can resemble pneumonia, including cough, shortness of breath, and fever. Cryptococcal meningitis can cause headache, fever, and neck pain.

Histoplasmosis is an infection caused by fungus found in the environment, particularly in soil that contains large amounts of bird and bat droppings.

How it spreads: People can get histoplasmosis by breathing in the microscopic fungus from the environment.

Who is at risk: Anyone can get histoplasmosis, but those most at risk for serious infection include adults over 65 years old, infants, and people with weakened immune systems.

Signs in birds: Birds do not get sick from histoplasmosis.

Psittacosis is a disease caused by bacteria (Chylamydia psittaci) spread through the droppings and respiratory secretions of infected birds. People most commonly get psittacosis after exposure to pet birds, like parrots and cockatiels, and poultry, like turkeys or ducks. When birds are infected, veterinarians call the disease avian chlamydiosis.

How it spreads: People most commonly get psittacosis by breathing in dust from droppings or respiratory secretions of infected birds. Less commonly, birds infect people through bites and beak-to-mouth contact.

Who is at risk: Anyone who is exposed to the bacteria can get psittacosis, but it is more commonly reported among adults. People who have contact with birds (such as bird owners and those who work with birds) are at increased risk.

Signs in birds: Infected birds may or may not show symptoms. If they do have symptoms, they can include poor appetite, discharge from the eyes or nose, diarrhea or loose droppings, green urates (the white part of their droppings), or breathing difficulty, among others.

How to stay healthy around pet birds

Before buying or adopting a pet bird, make sure a bird is the right type of pet for your family. Know that many pet birds have a very long life span. Some parrots can live for 20 years or longer. Birds require special care and can sometimes carry germs that can make people sick. Because of this, certain types of birds might not be suitable for young children or people with weakened immune systems living in the household. 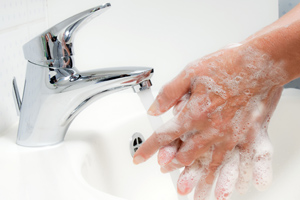 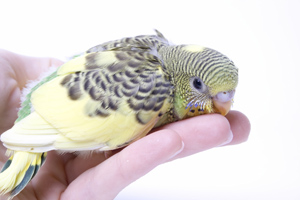 Pet birds do not have teeth, but their beaks can still cause a lot of damage if they bite or attempt to bite you. Birds can also have very sharp nails and talons. Germs can spread from bird bites and scratches, even when the wound does not seem deep or serious. Always closely supervise children around birds.  If a bird scratches or bites you, you should:

If you seek medical attention, make sure to tell your doctor a bird bit or scratched you.

How to keep pet birds healthy

Keeping your pet bird healthy helps to keep you and your family healthy. To learn how to stay healthy around pet birds, visit the Healthy People section. 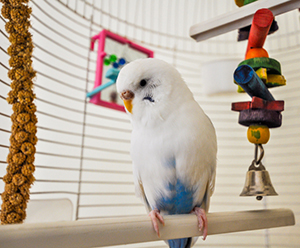 Before choosing a pet bird 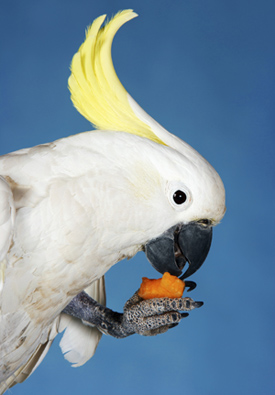 How to choose a pet bird

When choosing a pet bird, you should: 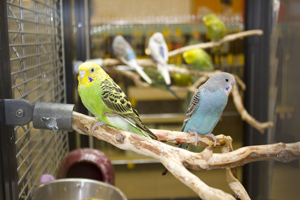 How to house pet birds

Learn how to stay healthy while cleaning your bird’s cage.

Selecting and caring for a pet bird

Visit the Healthy People section for information about staying healthy around pet birds.