Escherichia coli (E. coli) is a bacteria that normally is an important part of the healthy intestinal tracts of humans and animals. However, there are some kinds of E. coli that are harmful and can cause disease.

The most common type of E. coli infection that causes illness in people is called E. coli O157, 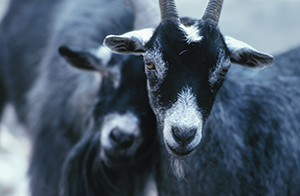 which produces a toxin known as Shiga-toxin. Shiga-toxin producing E. coli is abbreviated as STEC. Symptoms of infection with this germ include watery or bloody diarrhea, fever, abdominal cramps, nausea, and vomiting. The illness can be mild to severe. Young children are more likely to have severe problems with E.coli O157—including kidney failure—and can even die from E. coli O157 infections.

Animals that can spread E. coli O157 to humans include:

How animals and people become infected

Most people become infected with E. coli O157 from contaminated food, such as 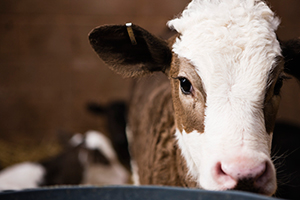 undercooked ground beef or raw (unpasteurized) milk, but E. coli O157 can be passed directly to people from the stool of young calves and adult cattle.  E. coli O157 also can be spread from person to person, particularly in places where frequent and close contact between people occurs, such as day-care facilities.

E. coli O157 is naturally found in the intestinal tracts of many farm animals, including healthy cattle, sheep, and goats.  Animals can carry E. coli O157 and shed the germs in their stool but still appear healthy and clean. The germs can quickly contaminate the animals’ skin, fur, feathers, and the areas where they live and roam.

Animals can appear healthy and clean but can spread E. coli O157 to humans or other animals.

What are the symptoms of an E. coli O157 infection?

Symptoms usually occur 3 to 4 days after a person comes in contact with E. coli O157. Illness can range from mild to severe and life-threatening. Most people get better within 5 to 7 days. Young children infected with E. coli O157 are at highest risk for developing severe symptoms and complications, such as hemolytic uremic syndrome, which is a type of kidney failure.

If you develop any of the symptoms described above, contact your doctor and be sure to inform him or her of any recent contact that you have had with animals. Please visit CDC’s E.coli website for more information.

The best way to prevent getting E. coli from animals is to always wash your hands with soap and running water immediately after contact with animals, their environments, or their stool.

Your doctor will request a stool sample to be tested if you are suspected to be infected with E. coli O157. Many labs can determine if the Shiga toxin is present, and most labs can identify the O157 bacteria itself.  To figure out the specific strain of the bacteria, the stool sample will be sent off to a state public health laboratory for testing. This helps determine if your infection matches or doesn’t match any current outbreak strains of E. coli.

The best treatment for E. coli O157 infection is supportive therapy, making sure to drink plenty of fluids to stay hydrated.  There is no evidence that taking antibiotics or antidiarrheals (like Imodium®) is helpful, and these may actually increase the risk of a life-threatening complication called hemolytic uremic syndrome, or HUS.

Treatment is not recommended for infected animals because they do 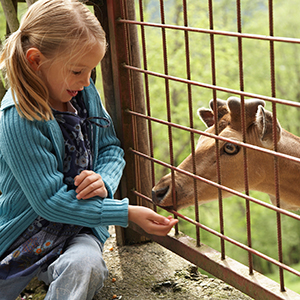 not usually show any signs of illness with E. coli O157.