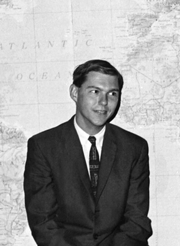 Immunization Successes Fueled by a Host of ‘Boring’ Details

In war as in life, the difference between success and failure is often the unglamorous ability to move things efficiently and with certainty, deliver things, and ensure that all the necessary personnel and equipment, supplies and knowledge are in the right place, at the right time, in the right condition.

As it turns out, the same is true for a successful immunization program,. And that’s why Rafe Henderson may be one of the most significant figures in the largely successful “Expanded Program on Immunization” which has brought life-saving vaccines to every developing country in the world over more than 40 years of its existence, even though few people outside CDC and the World Health Organization have ever heard his name.

But they can see what his work has achieved. After joining CDC in 1965 as an Epidemic Intelligence Service Officer, Henderson quickly moved to other jobs, including fighting smallpox in Nigeria and a stint as medical officer in CDC’s Office of Program Planning and Evaluation.

By 1977, Henderson found himself at the World Health Organization as program manager for the Expanded Programme on Immunization. This was the frontline of the effort to capitalize on the success of immunizing people in the developed world, by expanding it to those in less developed countries. The goal was to vaccinate all children worldwide by 1990 for six illnesses, including polio and measles.

It called for a plan. Not just a plan but an operations manual that provided a clear and failsafe blueprint for standardizing all aspects of a vaccination program across dozens of countries, taking into account differing cultures, capabilities, language and technical proficiencies and much more. It also required tools for measuring performance and quantifying achievements.

It was a daunting task. Luckily, Henderson had some capable colleagues, especially a pair of architects who decided that they would rather work in this area than in construction. (It also means that the architects of an operations manual that remains relevant and useful to this day were actual … architects.)

“We had a small team but we worked well together,” Henderson said. “We were able to revolutionize the world of immunizations in five to six years. And the systems remained pretty much intact.… But it was very, very difficult. We did the best we could with what we had.”

The details were endless. The plan had to specify the size of needles for syringes; how to properly sterilize glass syringes in the early days when they were used; and then, when plastic syringes replaced glass, how to sterilize them without melting the plastic. Eventually single-use syringes made those edits obsolete. There were standards for determining how much vaccine would be needed and for proper storage and management.

One of the biggest – and thorniest – questions was how to ensure that the cold chain could be maintained. This work was crucial because vaccines had to be kept in a narrow temperature range, from the point of manufacturing to when they were used.

That meant the operations plan had to include instructions for repairing refrigeration units and cold boxes. It lead to the deployment of wax labels that changed color based on temperature, so that it was easy to identify – and verify – the temperature status of the vaccine.

While the plans were detailed, it didn’t include everything. Understanding the critical role motorcycles played in transporting vaccines and samples, Henderson wanted to include a section on basic motorcycle mechanics and repair.

WHO managers, however, balked, saying that kind of greasy but important advice wasn’t necessary.

It was a rare loss. The immunization successes that are being recognized this week during the 50th anniversary of CDC’s global immunization efforts, can in many ways, draw a line to the work Henderson and his colleagues performed.