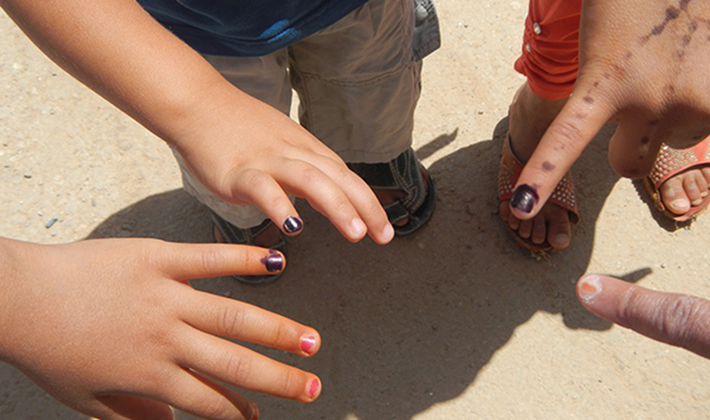 It was again demonstrated that “science knows no country”—to quote Louis Pasteur—when CDC and global partners coordinated a multi-country response to the 2013-2015 Middle Eastern polio outbreak. Through the World Health Organization (WHO) and CDC surveillance system known as the Early Warning Alert and Response Network (EWARN), which gathers reports of illnesses from healthcare entities, CDC and partners detected acute flaccid paralysis (AFP) cases in Syria. Labs tested patient specimens, which confirmed polio caused the illnesses. The lab tests identified 36 cases in Syria first, followed by confirming two more polio cases in Iraq. Quick detection followed by a rapid response stopped the outbreak within six months by vaccinating about 27 million children, many of whom were in unsafe and difficult-to-access areas of conflict.

The response team designed the strategic response plan to contain the outbreak to Syria and Iraq. By preventing the disease from spreading to nearby countries, the plan limited the threat the disease posed to polio-free countries, and also to global polio eradication deadlines.

“We needed a plan to reach the kids to vaccinate them against polio. We came up with a strategic response that involved three phases,” says Ehrhardt. Before the outbreak, Syria had not had a case of polio for more than 10 years. The conflict in Syria and Iraq interrupted routine vaccinations of children, which led to an immunity gap and the subsequent outbreak in both countries. Now it was up to CDC and the other GPEI partners, and the eight Middle Eastern Countries affected—Syria, Iraq, Jordan, Lebanon, Egypt, Iran, Palestine, and Turkey—to prevent polio from crossing borders and infecting polio-free countries. 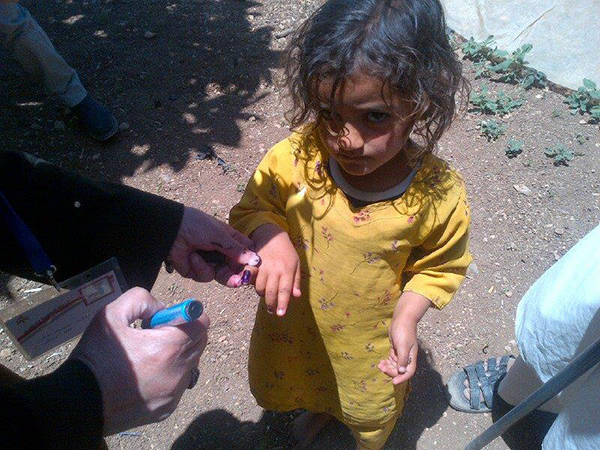 The first phase of the strategic response focused on containing the virus to the two affected countries—Syria, with 36 children with polio identified, and Iraq, with two children. During Phase I, from October 2013 to April 2014, Syria and Iraq held numerous immunization campaigns to vaccinate children against the poliovirus. The Syrian culture historically has had a positive view of vaccination efforts. “Parents wanted their children vaccinated,” says CDC’s Chukwuma Mbaeyi, DDS, MPH, epidemiologist in CDC’s Global Immunization Division. “They understood the protection vaccines provided their children and eagerly participated in vaccination campaigns conducted during the outbreak response,” adds Mbaeyi. In fact, routine vaccination coverage in the region was high before the war, which limited the number of children who were susceptible to the poliovirus and the size of the outbreak. The children who were most vulnerable to the disease were those born during the Syrian conflict.

From May 2014 to January 2015, Phase II targeted high-risk groups for supplemental immunization activities (SIAs) to vaccinate those who had missed routine immunizations. Regional conflicts had prevented children from getting routine vaccinations, which put them at the highest risk for polio infection. The conflicts had forced people from their homes and into unsafe areas, challenging vaccination efforts. Other children at high risk for infection included those in remote, difficult-to-reach areas and in districts with low vaccination coverage.

The final phase, Phase III, ran from February to October 2015 and was intended to increase polio immunity in the region by strengthening routine immunization systems and conducting additional vaccination campaigns to catch up children who had missed some of their routine vaccines.

Even though the ongoing conflict made it difficult for immunization teams to reach many parts of Syria and some parts of Iraq, parents had a strong desire to see their children vaccinated against polio. Local authorities and community leaders sometimes could negotiate immunization campaigns in conflict areas, in part because of the overall positive attitudes towards vaccinations in the region. “Because the polio partnership organizations are highly respected in the region, they were able to get through the politics to bring disparate groups together to make the vaccinations happen,” says Ehrhardt.

To reach the many children who needed vaccinations, the response set up immunization sites at healthcare clinics, border crossings, and displaced person camps, as well as sent vaccinators house to house in some locations. Mobile vaccination teams also traveled to remote regions. “Even in rural areas, people were very receptive to immunizing their children against polio,” says Mbaeyi, who witnessed this during immunization response efforts in Jordan. Also, when developing immunization strategies, CDC and global partners considered each country’s unique culture, which factored into the success of the campaigns.

The success of the Middle East polio response not only rested on the strategies used, but also on the people—the responders themselves. “CDC acted as one. The CDC staff from different divisions and branches worked together,” says Ehrhardt. That camaraderie was seen not only within in CDC, but across the entire cast of international partners. “Strong relationships fostered the response efforts and the attitude of partners to take on the role of doing whatever was necessary to get the job done,” says Ehrhardt.

In addition, the response provided CDC and its global partners with insight and best-practice strategies for areas at high risk for disease outbreaks. “This is unlikely the last polio outbreak, but the lessons learned during the Middle East response can be applied to contain polio and other diseases in the future,” says Ehrhardt. Countries suffering active conflict continue to be at high risk for polio and other diseases, mainly because it is difficult to vaccinate displaced people who are in politically unstable areas. But by using the multi-country Middle East polio response model, there is good reason to think that another outbreak in an unstable region can be stopped quickly and effectively to protect many lives, especially the lives of children.

We have made great achievements with polio eradication. In 2016, the number of wild poliovirus cases reached a historic low with a total of only 37 cases in Afghanistan, Nigeria, and Pakistan, the three remaining polio-endemic countries. This is a 99 percent reduction of this crippling disease from 1988, when there were 350,000 cases of polio in 125 countries. Science and innovation, collaboration and critical partnerships, and the hard work and commitment of the frontline vaccinators have resulted in the fewest cases of polio in the fewest places in history.