Responding to Measles Outbreak in Colombia 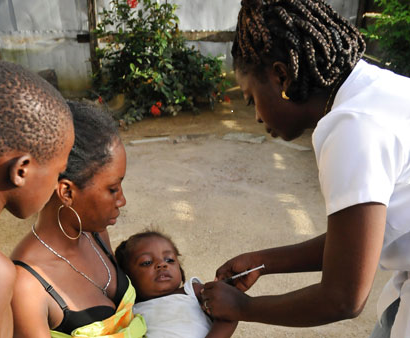 On March 8, 2018, in the Municipality of Medellin, Colombia, a 14-month-old boy who recently arrived from Venezuela, developed the tell-tale rash of measles and was subsequently hospitalized. Laboratory testing confirmed he had measles. He was among the first to be reported with measles in Colombia since measles had been declared eliminated in the Americas in 2016. Immediate measures were taken by Colombia Ministry of Health to identify all contacts, to look for other cases in nearby health care facilities and the surrounding community, and to vaccinate anyone who was not protected against measles. Since the first cases of measles were reported in Venezuela in July 2017, Colombia had been alerted to the risk of measles cases coming into the country and had already started preparing. CDC helped the Colombia government develop a public health emergency operations center (PHEOC), which opened in 2017. The PHEOC was then used to monitor the health status of migrants. This effective response structure helped limit the spread of measles —with only 241 cases and no deaths reported since March 2018—a notable success that has been recognized both locally and internationally.

In a globally connected world, gaps in public health systems allow outbreaks to emerge without warning and spread rapidly. Measles is perhaps more contagious than any other virus – nine out of 10 unvaccinated individuals who are exposed to measles will contract the disease. In 2018, more than 16,000 cases of measles were reported in the Americas, a region which had eliminated measles in 2016 and only faced sporadic importations of measles virus that were quickly controlled. However, a health system crisis in Venezuela led to serious decreases in measles vaccination coverage. Gaps in population immunity in nearby countries of Brazil and Colombia left open doors for a rapid expansion in the number of cases. Brazil alone reported more than 10,000 measles cases in 2018.

The Colombian Ministry of Health and Instituto Nacional de Salud (INS) responded immediately to the initial case of measles reported on March 8, 2018. They had already enacted resolutions to provide emergency care to migrants despite the potential strain on the country’s health system; however, measles-specific measures were also needed.

Each of the districts reporting at least one confirmed case in 2018 implemented outbreak control measures including contact tracing, mapping transmission chains, and increased surveillance in healthcare facilities. The country also intensified vaccination efforts for at-risk populations and areas along the border with Venezuela. While vaccination campaigns helped in the community and non-healthcare settings, specific screening, isolation, and infection prevention and control measures were implemented at healthcare facilities treating measles cases.

By investigating chains of transmission, local health authorities were able to identify risk factors for exposure and take action. Disease surveillance and epidemiology programs worked together as they used data to drive the response. When data showed that infants were at greater risk because they were too young for the first measles vaccine typically given at one year of age, MOH adapted the response to include a targeted vaccination campaign for at-risk infants’ ages six to eleven months in high-priority areas. Health workers successfully vaccinated 59,721 children and increased measles vaccine coverage above the 95% level needed to prevent outbreaks.

Harnessing Successful Partnerships to Contain an Outbreak
Infectious diseases do not respect international borders, and humanitarian crises can accelerate the re-emergence of diseases and put other nations at risk. Regional and global partnerships are required to contain outbreaks at the source before they spread to epidemics. 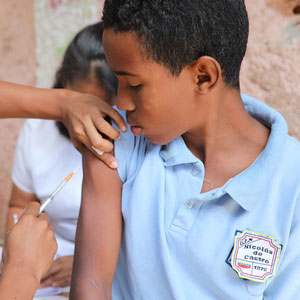 CDC staff from the Division of Global Health Protection (DGHP) and Global Immunization Division (GID), along with partner organizations including the Pan American Health Organization (PAHO) and the International Organization for Migration (IOM), supported various aspects of the outbreak response. Colombia was able to harness multiple rapid response actions that were implemented across federal, departmental, and local public health entities.

With support from the World Health Organization (WHO), PAHO, and CDC, national rapid response workshops trained more than 100 officials from 32 departments on measles outbreak response. Vaccination stations also were set up on the border with Venezuela, and additional vaccinators were deployed in priority municipalities. In just one vaccination event conducted from May to July 2018, measles and other vaccinations were administered to 11,009 Venezuelan migrants at points of entry.

In addition, CDC, in collaboration with the U.S. Agency for International Development and PAHO, funded the purchase and distribution of measles, rubella, and diphtheria vaccines throughout the region. As a WHO/PAHO collaborating center reference laboratory, CDC also tested clinical specimens for multiple pathogens, including for measles, rubella, polio, Zika, chikungunya, and dengue viruses dengue to help Colombia detect and respond to outbreaks. Efforts like these worked to strengthen the region’s laboratory capacity to combat vaccine-preventable diseases.

As a result of these efforts, only 241 confirmed cases of measles and no measles-related deaths were reported in Colombia since the beginning of the outbreak in March 2018, despite an influx of more than one million migrants from Venezuela. The outbreaks in Venezuela and Colombia highlight the continuing need to build country and global capacity to improve public health preparedness and prevent epidemics, strengthen public health infrastructure for disease detection, improve rapid response to global health emergencies, and strengthen partnerships and collaboration for global health security.