Ensuring Data Quality in the Midst of Insecurity and Uncertainty

Working in partnership with the World Health Organization (WHO), Lopez and Hardy use remote data evaluation methods to ensure that the Early Warning Alert and Response Network (EWARN), a disease surveillance system for epidemic-prone diseases, is operating effectively. 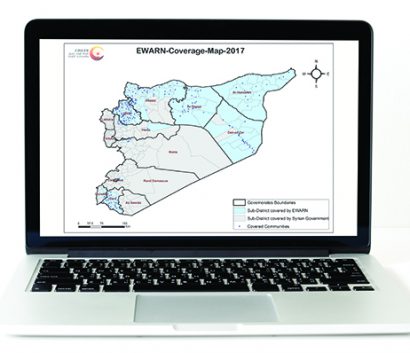 Screenshot of EWARN map from 2017 campaign

EWARN is often the only source for health data during a humanitarian emergency. It fills the gaps in existing public health surveillance systems that may have limited or no capacity during a crisis. Covering a population of approximately 12 million, the northern Syrian EWARN was created to supplement the Syrian Ministry of Health’s Early Warning and Response System that covers the southern region of the country. EWARN draws data on 13 communicable diseases from more than 480 health facility sentinel sites. EWARN is primarily implemented and coordinated by the Assistance Coordination Unit (ACU), a Syrian nongovernmental organization based in Turkey. In collaboration with ACU, teams from WHO and CDC continuously evaluate and improve the system to best serve impacted communities. In particular, Lopez and Hardy focus on how the circumstances in the conflict-affected areas of Syria impacted the collection and management of EWARN’s data in 2018.

The EWARN system plays a vital role in early detection of potential epidemics, making rapid response across humanitarian emergencies possible. After detection of a disease threat, health organizations determine the needed response, as well as help build capacity in the affected community to prevent future outbreaks. For example, in Syria, the system helped detect a wild poliovirus (type 1) outbreak in 2013, more than a decade after the disease was eliminated in the country, as well as an outbreak of circulating vaccine-derived poliovirus (type 2) in 2017. ACU set up the Syrian Immunization Group and the Syria Immunization Task Force to build a vaccination program in response to these polio outbreaks. In 2015, the task force led a campaign to vaccinate about 1,280,000 Syrian children, covering 99.27% of children in all seven targeted governorates and continues immunization campaigns in various districts to this day. 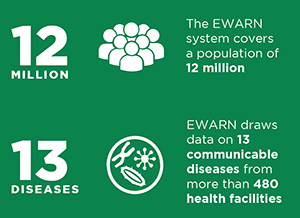 The system evaluations conducted by Lopez and Hardy are deliberately designed to be broad which helps establish the multi-faceted causes and effects of an outbreak. “Our focus is on data quality and how people interact with the data they collect,” Lopez said. In addition to virtual interviews with database managers, Hardy and Lopez assess the attributes of EWARN’s database, including the timeliness, sensitivity, simplicity, and quality of data.

“Any gaps in data are not for lack of trying,” said Lopez. While remote evaluation of EWARN can be difficult, those who are working on the ground encounter their own set of challenges when collecting and managing EWARN’s data. Lopez describes the health workers gathering data as a “very dedicated and hardworking staff with innovative methods.” For instance, when health workers identified challenges to reach communities during outbreaks, they adopted the popular WhatsApp mobile messaging application as their method of communication, allowing workers to reach otherwise inaccessible populations with a simple message. In a health security emergency, every bit of speed and accuracy counts when it comes to prevention, response, and recovery.

Whether in Syria or any other country, special attention must be paid to conflict-affected regions that deal with unique health security challenges, including decreased access to health services and a reduced ability to move securely. With CDC’s support to improve EWARN, the system will be even more effective in detecting outbreaks early and promptly guiding response to save the lives of the most vulnerable in the face of instability.