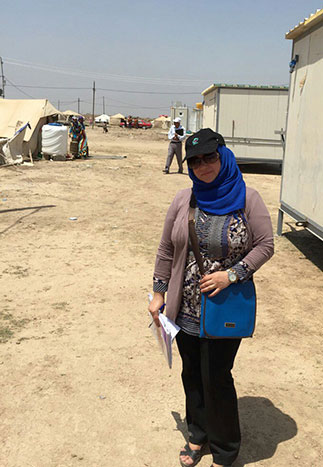 In Iraq, amid security concerns and a complex political climate, Rana Khalid is taking on a challenge that CDC Director Tom Frieden, MD, MPH, calls “huge”: finding and documenting cases of pertussis, also known as whooping cough. Frieden himself is no stranger to pertussis—both he and his son have had the disease.

This is the second time Khalid and Frieden have tried to connect; the first time, roads in Iraq were closed and Khalid was unreachable. Frieden regularly offers his time to Field Epidemiology Training Program residents such as Khalid, learning about their challenges in the field and giving advice. Today, both have made the scheduled call, but the lines are scratchy and distant – voices muddled. Still, there is much to discuss before the hour runs out.

Frieden acknowledges the immense difficulty of tracking pertussis. He tells Khalid that when he was an EIS officer in 1990, someone suggested he do a surveillance project on pertussis. “I looked at it and I said, this is a very tough area, and we may not be able to get accurate testing. You can get a lot of false negatives.”

Pertussis is notoriously hard to confirm; doctors generally rely on symptoms to make a diagnosis. However, partially vaccinated children and adults may not have the typical “whoop” with their cough that pertussis is known for. Frieden says it remains massively underdiagnosed around the world.

In Iraq, keeping track of cases is further complicated by security problems that keep patients from seeking treatment, issues with laboratory testing to confirm the disease, and the public health impact of the recent cholera outbreak. “We see a lot of differences in the numbers coming from the provinces,” notes Khalid. 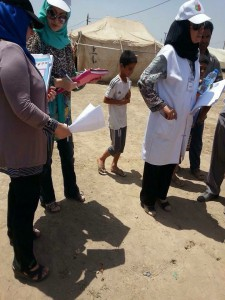 Khalid, who previously spent time investigating a cholera outbreak in internal displacement camps in Iraq, is currently focused on getting doctors across the country to report suspected cases of pertussis and confirm the diagnoses with laboratory testing. It’s a big challenge that requires a lot of time and energy. To meet the need, Khalid and her team developed a new investigation form for doctors to complete for each suspected case, which is then sent to the Central Public Health Laboratory along with a blood sample. Over a thousand kits were provided to test the samples.

However, despite clinics receiving kits and training, participation in the project remains low. “Unfortunately, the samples have been very few,” reports Khalid. “Only about 40.”

Frieden listens closely and then begins to help Khalid lay out some potential strategies, rapid-firing ideas. His main points are to prioritize quality information and to think about how she can use existing resources to her advantage.

“It may be more feasible to work in smaller areas to get higher quality information,” says Frieden, advising Khalid to find two facilities or provinces with which she can work closely to look at case records. “Two places,” he explains, “because in one place you could have very good or very bad luck, and then you don’t have a clear conclusion.”

He points out the importance of keeping the investigation forms simple and brief. “Every question you ask takes time to answer, so the more questions you ask, the lower quality of answers you get on each answer.”

To solve the problem of not having enough samples available, he recommends working alongside programs that are already in place, such as checking with Iraq’s influenza surveillance program to see if influenza samples that test negative might be tested for pertussis. “It’s sometimes easier to work with what you’ve got than to try to get more in such a difficult environment.”

Khalid asks Frieden how pertussis surveillance is done in the US. She is looking for more ideas.

“The challenges are substantial,” he tells her. He again emphasizes the need for quality information. “Pertussis is so hard to do good surveillance on that we don’t try to do intensive surveillance everywhere. Do it well enough nationally, and then find a couple of local areas to do it really well. That would be my recommendation.”

In the best conversations, ideas flow both ways. Before ending the call, Frieden wants to hear about Khalid’s work on cholera in internal displacement camps.

Khalid explains how she approached last summer’s outbreak: “We went every day. We went to hospitals with the investigation form. We took samples from patients and their families. We tested the water supply for chlorine levels. We talked to people in the camps about how to protect themselves from cholera. Lots of education.”

Frieden uses this as a springboard for a discussion about water safety, noting that the benefits of safe water and chlorination extend far beyond cholera.

“I want to thank you for all the work you’re doing,” says Frieden in closing. “We try to focus on studies that can really make a difference and protect people’s health.”

Both Frieden and Khalid know that exchanging ideas, learning what works and what doesn’t, and making constant improvements are vital steps toward doing better science and, ultimately, saving more lives.

This Inside Story by Jessica Alexander