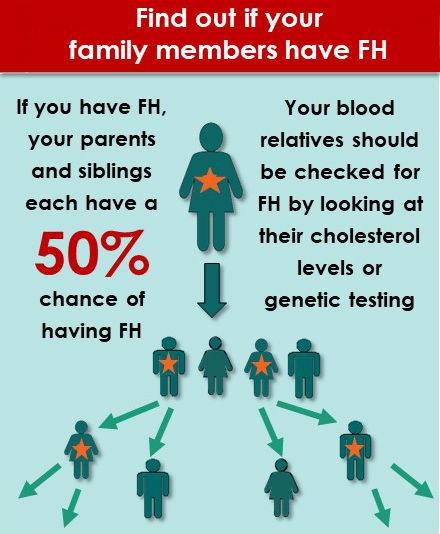 Although more than one million people in the U.S. have FH, only 10-20% know they have it. If you have been diagnosed with FH, your parents, sisters, brothers, and children can be tested for FH by measuring their LDL cholesterol concentration, genetic testing, or both. If your genetic test results show that you have a known mutation, family members who get genetic testing should be checked for the same mutation.

Finding people with FH early is important to help prevent coronary heart disease. If you have FH, your cholesterol levels are high starting at birth, unlike people who develop high cholesterol later due to behaviors like smoking or an unhealthy diet. This means that heart disease starts to develop earlier, making you more likely to have a heart attack at a younger age. The sooner a person with FH is identified, the quicker they can start taking medicine to lower their LDL cholesterol levels and reduce their risk of getting heart disease in the future.