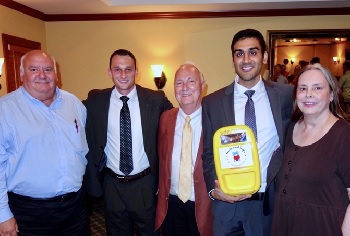 Georgia native Dr. Ravi Patel was surprised when he saw the melanoma statistics on CDC’s U.S. Cancer Statistics: Data Visualizations tool. “I was shocked to learn that Georgia is ranked number 6 in the United States for melanoma incidence according to the CDC,” he said. “I knew we could do better.”

After completing a dermatology rotation at the University of Colorado under the guidance of Dr. Robert Dellavalle, the chairman of the Colorado Skin Cancer Prevention Task Force, Dr. Patel looked for ways to apply the lessons he had learned.

First, he founded the Georgia Sunscreen Initiative with medical residents at Gwinnett Medical Center and his colleagues at the Hearts and Hugs Foundation. Their goal was to reduce skin cancer in local communities, and they began by working with skin cancer prevention experts to identify the leading problems in the state. Step by step, their efforts developed into active partnerships with state agencies and universities. They also drafted a resolution titled Skin Cancer Prevention Education and Sunscreen Access, which was passed unanimously by the Medical Association of Georgia.

The Georgia Sunscreen Initiative has several goals for 2018, including putting a sun-safety plan into action in all 29 of the state’s public universities, expanding educational programs in schools and high sun-exposure industries (such as agriculture and construction), and expanding its network of partners.

“The response to our initiative has been incredible,” said Dr. Patel. “We are excited about what 2018 holds for the State of Georgia and beyond.”