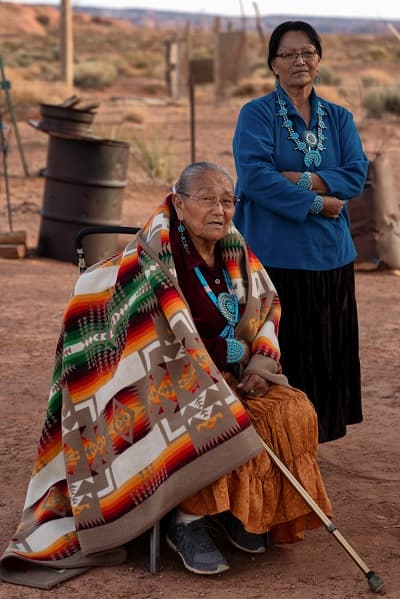 The American Indian Cancer Foundation is a national nonprofit organization that works to address inequities in cancer faced by American Indian and Alaska Native communities. The foundation receives financial support from CDC for this work.

“Colorectal cancer is the second leading cause of cancer death for Native people,” said Lindsey Petras, MSN, RN, Cancer Program Manager at the American Indian Cancer Foundation. “Many of the clinics we partner with were interested in working with us on an intensive campaign to promote colorectal cancer screening.”

The foundation developed the Blue Beads Campaign to increase awareness about colorectal cancer among American Indian and Alaska Native communities. “The idea for the name came from the traditional and spiritual art form of beadwork,” said Misha Loeffler, BA (Bay Mills Ojibwe/Blackfeet), Cancer Equity Senior Program Specialist for the American Indian Cancer Foundation. “While there are multiple meanings behind the symbolism in beadwork, Blue Beads at the American Indian Cancer Foundation symbolizes the acknowledgment and honoring of Native relatives whose life has been affected by a colorectal cancer diagnosis and contains prayers for reducing the impact of colorectal cancer in Indigenous communities.”

In March 2021, the foundation partnered with nine Tribal and Urban Indian health clinics for the Blue Beads campaign. The clinics offered online classes to teach their staff and the community about colorectal cancer. They sent reminders to their patients who were due or past due for screening. The clinics also used social media to promote awareness about colorectal cancer. The foundation created culturally tailored resources and messages to support the clinics in these efforts.