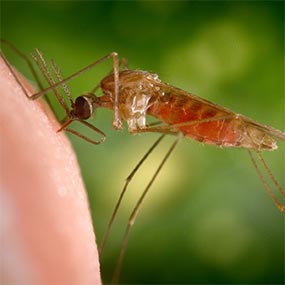 Malaria is a mosquito-borne disease caused by a parasite. The vast majority of cases in the United States occur in travelers and immigrants returning from countries where malaria transmission occurs, including sub-Saharan Africa and South Asia.

Can malaria be transmitted to an infant through a mother’s breast milk?

Are prophylaxis antimalarial medications safe to take while breastfeeding?

If a mother is taking a prophylaxis antimalarial drug and breastfeeding, will her infant be protected from malaria through the transfer of medication in her breast milk?

No. The quantity of drug transferred in breast milk is not enough to provide protection against malaria for the infant. The breastfeeding infant needs his or her own prophylaxis antimalarial drug.

Is it safe for an infant to breastfeed while his or her mother is taking medication to treat malaria?