NSCH at a Glance

The National Survey of Children’s Health (NSCH), sponsored by the Maternal and Child Health Bureau of the Health Resources and Services Administration, examines the physical and emotional health of children from birth to 17 years. The NSCH was designed to produce nationally- and state-representative estimates. NSCH was selected for inclusion in VEHSS in order to capture demographic and state-level variation of visual health among children, a population that may be underrepresented in other data sources selected for inclusion in VEHSS.

The NSCH went under a redesign in 2015 for the 2016 Survey and has since been conducted by the U.S. Census Bureau. The redesign was a result of declining response rates coupled with the fact that fewer households have landline telephones. The underlying sampling frame went from using the State and Local Area Integrated Telephone Survey (SLAITS) sampling frame based on telephone numbers originally developed for the National Immunization Survey (NIS)[1] to household addresses. The 2016 and 2017 NSCH used an address-based sample covering the 50 states and the District of Columbia. Household addresses were randomly drawn from the Census Master Address File (MAF). The sample file was selected from the Census MAF and supplemented with an administrative records-based flag identifying households likely to include children. This child-presence indicator allowed the Census Bureau to oversample households that were more likely to have children. The 2016 sample was developed to select a roughly equal number of addresses within each state and the 2017 sample was developed to produce roughly equal number of responses by state. In households with both children with special health care needs (CSHCN) and non-CSHCN, there was an 80% oversample of CSHCNs. A 60% oversample of young children, ages 0-5, was applied in households with either all or no CSHCNs.

Under the new design the survey uses a two‐phase multimode data collection design that combines the former NSCH and the National Survey of CSHCN (NS‐CSHCN) into the NSCH. It now consists of two questionnaires: (1) a household screener to determine whether the household includes a child(ren) and to select the target child within the household, and (2) a topical questionnaire tailored to three age groups ― 0-5 years, 6-11 years, and 12-17 years. The respondent is a parent or guardian who knew about the child’s health and health care needs.

The process differed a little between the 2016 and 2017 surveys. In general, all sampled addresses received an initial invitation letter with instructions to participate by web. After a certain point if a household did not complete their survey they were mailed a follow‐up letter. This letter again included instructions for responding via web. Addresses with the lowest probability of completing a web survey received a paper screener with the second follow‐up mailing (for 2017, paper screeners were sent with the initial mailing). All nonresponding addresses received paper screeners in the third and subsequent follow‐up mailings. Those who responded via web completed both the screener and topical questionnaires in one instrument, while those who returned the paper screener via mail were sent a paper topical instrument to complete. The NSCH paper and web instruments were available in both English and Spanish. Data were collected from June 2016 through February 2017 and from August 2017 through February 2018 for the 2016 and 2017 Surveys, respectively. 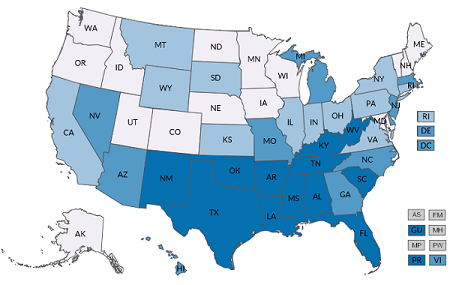 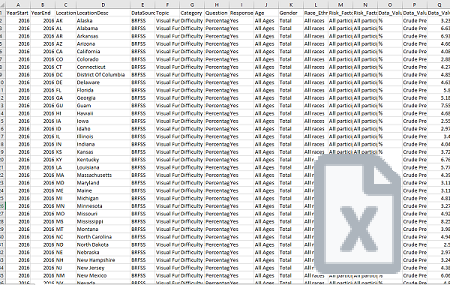 We estimated the prevalence rate and sample size for each survey instrument selected for inclusion.  We merged samples from the 2016 and 2017 rounds for analysis in order to maximize the available sample sizes at more detailed levels of stratification. We did not include data prior to 2016 because the different modes of data collection and the different sampling frame make the data not compatible.

For binary response questions included in the analysis, prevalence rate was defined as the number of persons who gave an affirmative response to the question divided by the total number of respondents who gave an affirmative or negative response and then multiplied by 100 for presentation in percentage format. For questions with a mark all that apply option, the data value is the proportion of respondents that selected that response option divided by the total number of respondents who either marked or did not mark that response option; and all responses may not sum to 100%. We estimated upper and lower confidence intervals and the relative standard error of the prevalence estimate using the Clopper-Pearson method with the smaller of the effective sample size and the sample size. The respondent sample size was reported for each response.

Starting in 2016 the NSCH contains four questions related to VEHSS indicators and were included for analysis.  These questions were fielded in both the 2016 and 2017 surveys. One question was categorized under the ‘Visual Function’ Topic and ‘Difficulty Seeing with Glasses’ Category. The other 3 questions were under the ‘Service Utilization’ Topic and covered ‘Need’, ‘Screening’, and ‘Provider Type’ categories. Two of the questions were sub-questions and were asked if the respondent responded Yes to the main question. Table 1 presents these four questions and includes the VEHSS Topic and Category, the NSCH variable name, the year(s) survey data are available, the survey question, and the response options.

The four questions included in the analysis come from Section A: This Child’s Health (visual function question) and Section C: Health Care Services (service utilization questions) for both the 2016 and 2017 NSCH.

The 2016 and 2017 surveys used the same question wording for all four questions. The two surveys were merged and new weights were created by dividing the original weights by 2 according to survey guidance [3].

Outcome variables for all questions were coded such that bivariate responses were coded into Yes/Selected, No/Not Selected, and Missing (including Legitimate skip and Missing in error), although only the prevalence of Yes/Selected responses are reported below. The sample population for analysis (i.e., denominator) was also limited to those coded as Yes or No. Though K4Q27 was not analyzed, the frequencies to K4Q27 ― During the past 12 months, was there any time when this child needed health care but it was not received? By health care, we mean medical care as well as other kinds of care like dental care, vision care, and mental health services. ― were used to determine the sample who should have responded to K4Q28X03― If yes, which types of care were not received? ―selected Vision Care.

The vision health-related questions in the NSCH have not been used by researchers in previously published papers. This is probably largely due to new vision health questions replacing the older ones in 2016. There was one abstract[1] at the Association for Research in Vision and Ophthalmology (ARVO) Annual Meeting that presented findings from the 2016 NSCH vision question on screening. Prior to 2018, the DRC and a paper[2] looking at the relationship between ADHD and children ages 4-17 years with vision problems were the only sources found that used the NSCH vision health questions. The question wording for blindness – “Does this child have any of the following? Blindness or problems with seeing, even when wearing glasses” – is nearly identical to the wording used in the ACS and BRFSS, though BRFSS does not include children.

The NSCH provides national- and state-level estimates of visual function, as reported by a parent or guardian. The level of detail of results is limited by sample size. At the state level, we were only able to identify prevalence estimates at a single level of stratification. We currently plan to include full stratification at the national level. Unlike other data sets included in VEHSS, NSCH only includes one VEHSS-defined age group, which means that full stratification of results is at the 2nd level (race*sex).

Additional information about NSCH can be found on the Data Resource Center for Child & Adolescent Healthexternal icon website and the Design and Operation of the National Survey of Children’s Health, 2007 [PDF – 640 KB] Vital and Health Statistics report.

See the VEHSS NSCH Data Analysis report for more details on our analysis and validation of the VEHSS analysis of the NSCH.