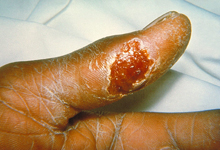 An ulcer caused by Francisella tularensis.

The signs and symptoms of tularemia vary depending on how the bacteria enter the body. Illness ranges from mild to life-threatening. All forms are accompanied by fever, which can be as high as 104 °F. Main forms of this disease are listed below: