The rhabditid nematode (roundworm) Strongyloides stercoralis is the major causative agent of strongyloidiasis in humans. Rarer human-infecting species of Strongyloides are the zoonotic S. fuelleborni (fülleborni) subsp. fuelleborni and S. fuelleborni subsp. kellyi, for which the only currently known host is humans. Strongyloides spp. are sometimes called “threadworms” (although in some countries this common name refers to Enterobius vermicularis).

Other animal-associated Strongyloides spp., including S. myopotami (nutria), S. procyonis (raccoons), and possibly others, may produce mild short-lived cutaneous infections in human hosts (larva currens, “nutria itch”), but do not cause true strongyloidiasis. 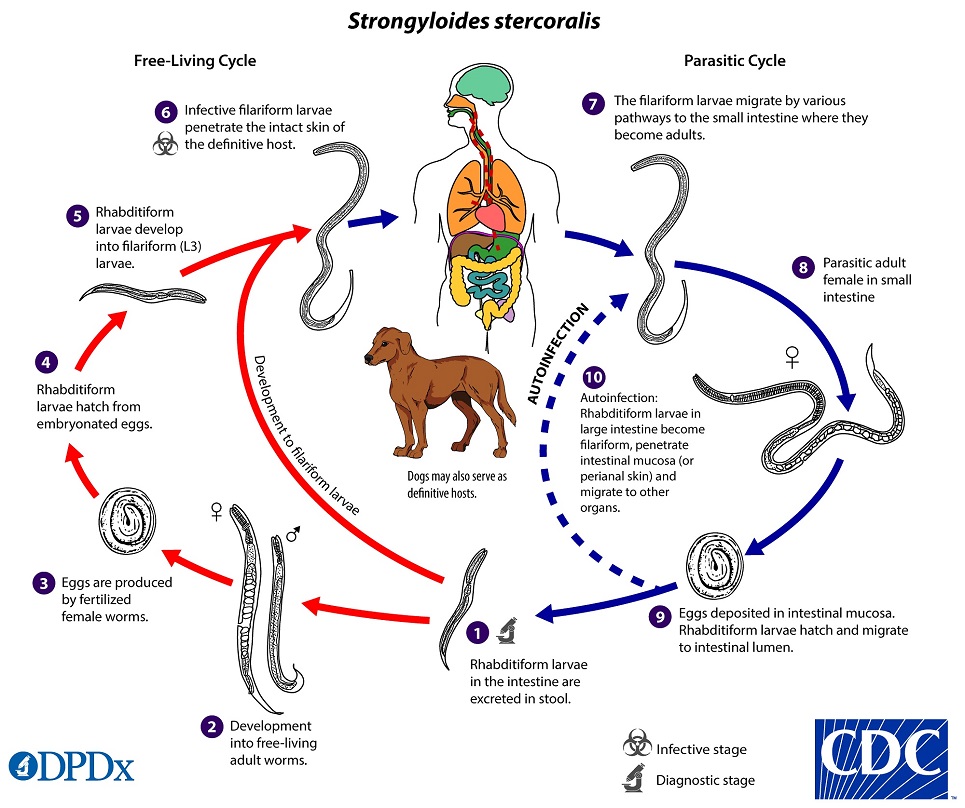 View Larger
The Strongyloides stercoralis life cycle is complex, alternating between free-living and parasitic cycles and involving autoinfection. In the free-living cycle: Rhabditiform larvae are passed in the stool of an infected definitive host

that mate and produce eggs

, from which rhabditiform larvae hatch

. The filariform larvae penetrate the human host skin to initiate the parasitic cycle (see below)

. This second generation of filariform larvae cannot mature into free-living adults and must find a new host to continue the life cycle.

, and migrate to the small intestine

. It has been thought that the L3 larvae migrate via the bloodstream and lymphatics to the lungs, where they are eventually coughed up and swallowed. However, L3 larvae appear capable of migrating to the intestine via alternate routes (e.g. through abdominal viscera or connective tissue). In the small intestine, the larvae molt twice and become adult female worms

. The females live embedded in the submucosa of the small intestine and produce eggs via parthenogenesis (parasitic males do not exist)

(see “Free-living cycle” above), or can cause autoinfection

Rhabditiform larvae in the gut become infective filariform larvae that can penetrate either the intestinal mucosa or the skin of the perianal area, resulting in autoinfection. Once the filariform larvae reinfect the host, they are carried to the lungs, pharynx and small intestine as described above, or disseminate throughout the body. The significance of autoinfection in Strongyloides is that untreated cases can result in persistent infection, even after many decades of residence in a non-endemic area, and may contribute to the development of hyperinfection syndrome. 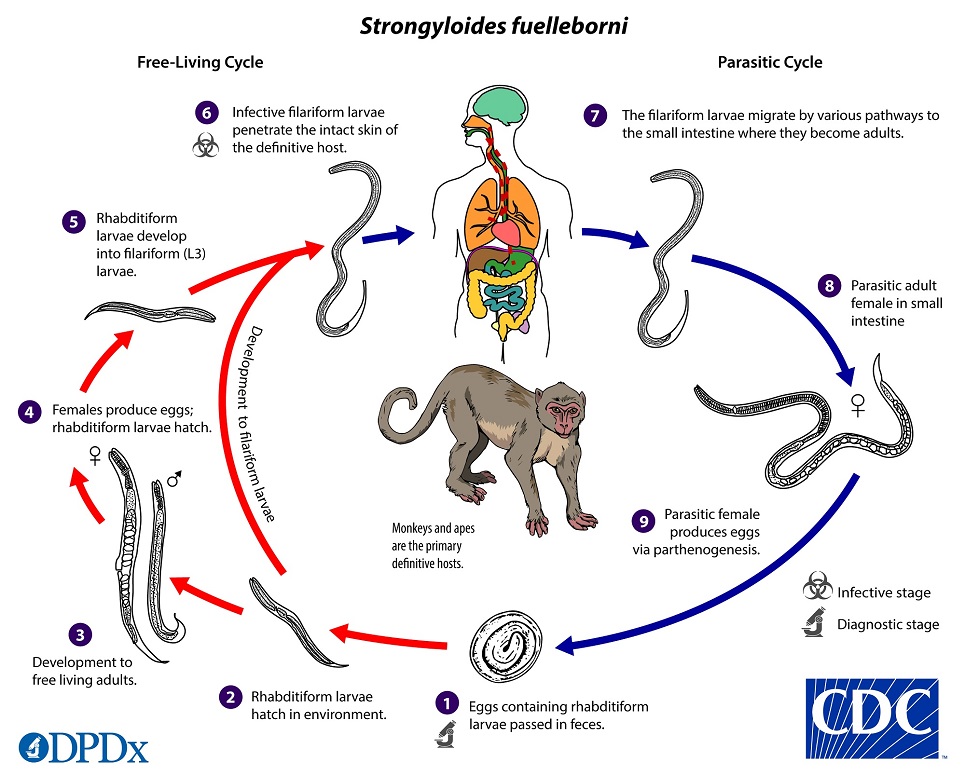 Strongyloides fuelleborni follows the same life cycle as S. stercoralis, with the important distinction that eggs (rather than larvae) are passed in the stool

, that develop to either infective filariform larvae (direct development)

. The free-living adults mate and produce eggs, from which more rhabditiform larvae hatch

. The filariform larvae penetrate the human host skin to initiate the parasitic cycle

. These larvae migrate via the bloodstream to the lungs, where they are eventually coughed up and swallowed, or reach the intestine via migration through connective tissue or abdominal viscera

and produce eggs via parthenogenesis (parasitic males do not exist)

Since eggs do not hatch within the host as with S. stercoralis, autoinfection is believed to be impossible. Transmission of S. fuelleborni subsp. kellyi to infants as a result of breastfeeding has been reported.

Strongyloides spp. are generally host-specific, and S. stercoralis is primarily a human parasite. However, patent infections with parasitic females have been detected in other primates (chimpanzees, monkeys, etc.) and domestic dogs. Two genetic populations have been found in domestic dogs, one that appears to only infect dogs and one that may infect both dogs and humans; all human infections have been attributed to this second genetic population. Domestic cats are experimentally susceptible to S. stercoralis infections although it is unknown if they have a role as a natural reservoir.

Strongyloides stercoralis is broadly distributed in tropical and subtropical areas across the globe. Transmission has been reported during summer months in temperate areas. Infections are most common in areas with poor sanitation, rural and remote communities, institutional settings, and among socially marginalized groups.

The initial sign of acute strongyloidiasis, if noticed at all, is a localized pruritic, erythematous rash at the site of skin penetration. Patients may then develop tracheal irritation and a dry cough as the larvae migrate from the lungs up through the trachea. After the larvae are swallowed into the gastrointestinal tract, patients may experience diarrhea, constipation, abdominal pain, and anorexia. Chronic strongyloidiasis is generally asymptomatic, but a variety of gastrointestinal and cutaneous manifestations may occur. Rarely, patients with chronic strongyloidiasis may develop other complications (e.g. arthritis, cardiac arrhythmias, chronic malabsorption, duodenal obstruction, nephrotic syndrome, recurrent asthma). Up to 75% of people with chronic strongyloidiasis have mild peripheral eosinophilia or elevated IgE levels.

The subcutaneous migration of filariform larvae in the autoinfective cycle, or “larva currens”, presents as a recurrent serpiginous maculopapular or urticarial rash along the buttocks, perineum, and thighs due to repeated autoinfection. This rash usually advances very rapidly (up to 10 cm/hr).