The nematode (roundworm) Enterobius vermicularis is widely known as the human pinworm due to the female’s long, pointed tail. In some areas the common names “seatworm” and “threadworm” are used (the latter of which is sometimes also used to refer to Strongyloides stercoralis). Another putative pinworm species, Enterobius gregorii, has been described and reported from humans in Europe, Africa, and Asia. However, further morphologic and molecular evidence suggests E. gregorii likely represents an immature form of E. vermicularis. The rat pinworm, Syphacia obvelata, has also very rarely been reported infecting humans. 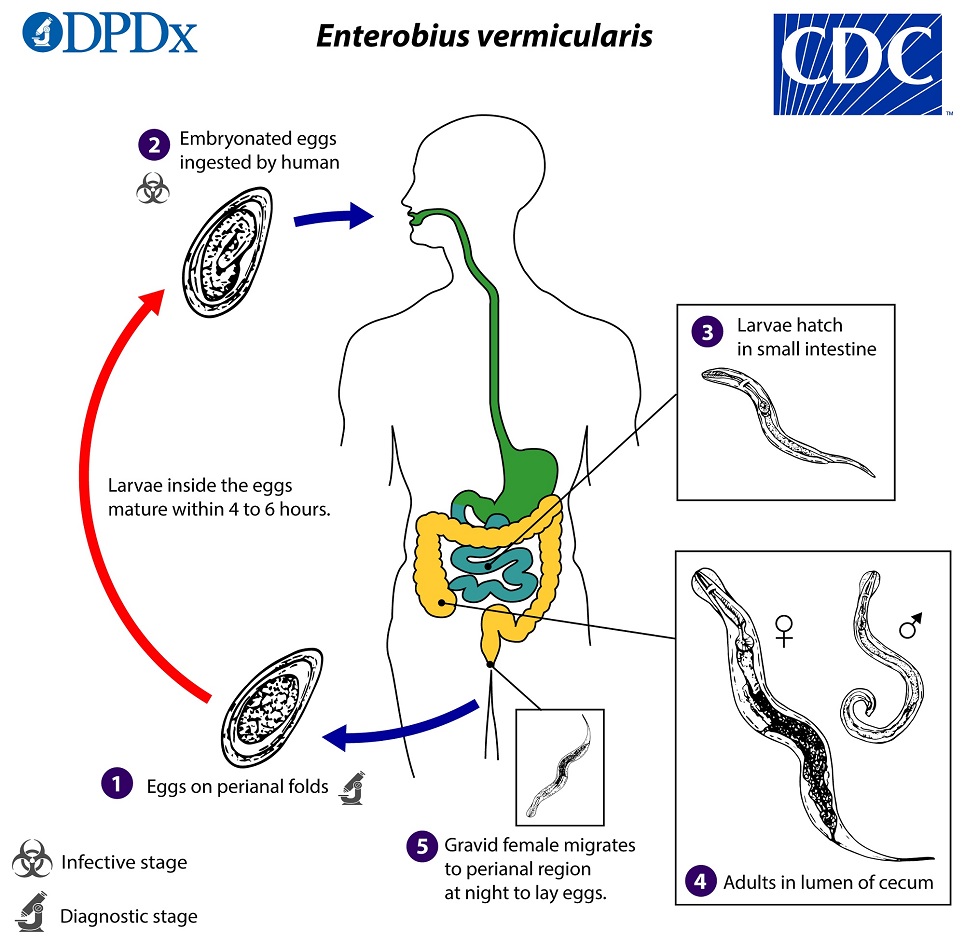 . Infection occurs via self-inoculation (transferring eggs to the mouth with hands that have scratched the perianal area) or through exposure to eggs in the environment (e.g. contaminated surfaces, clothes, bed linens, etc.)

. Following ingestion of infective eggs, the larvae hatch in the small intestine

and the adults establish themselves in the colon, usually in the cecum

. The time interval from ingestion of infective eggs to oviposition by the adult females is about one month. At full maturity adult females measure 8 to 13 mm, and adult males 2 to 5 mm; the adult life span is about two months. Gravid females migrate nocturnally outside the anus and oviposit while crawling on the skin of the perianal area

. The larvae contained inside the eggs develop (the eggs become infective) in 4 to 6 hours under optimal conditions

Oxyurid nematodes (pinworms) generally exhibit high host specificity. Humans are considered the only host for E. vermicularis, although occasional infections have been reported in captive chimpanzees.

E. vermicularis occurs worldwide, with infections occurring most frequently in school- or preschool-children and in crowded conditions.

Enterobiasis is frequently asymptomatic. The most typical symptom is perianal pruritus, especially at night, which may lead to excoriations and bacterial superinfection. Occasionally, invasion of the female genital tract with vulvovaginitis and pelvic or peritoneal granulomas can occur. Other symptoms include, teeth grinding, enuresia, insomnia, anorexia, irritability, and abdominal pain, which can mimic appendicitis. E. vermicularis larvae are often found within the appendix on appendectomy, but the role of this nematode in appendicitis remains controversial. Very rare instances of eosinophilic colitis associated with E. vermicularis larvae have been reported.