Crowdsourcing to Report and Respond to Zoonotic Diseases 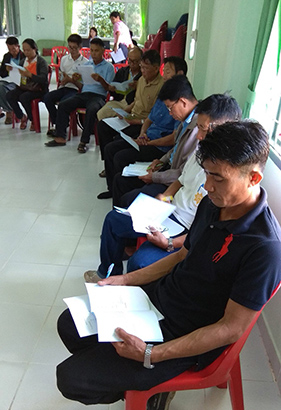 Local farmers receive training on how to use the mobile app.

In Thailand, farmers, local health volunteers, and human and animal health officers are using mobile technology to report zoonotic diseases that pose a serious threat to the health of people and animals. Abnormal illnesses and deaths, both in humans and animals, are reported to the Ministry of Public Health using a smartphone application, called FARMER, developed by the ministry’s Bureau of Epidemiology in partnership with CDC’s Division of Global Health Protection. The early reporting of illnesses and deaths allows for faster joint disease investigations involving experts in both animal and human health.

Memories of the severe 2004 Avian influenza (H5N1) outbreak in Thailand, and the recent re-emergences of diseases like brucellosis and anthrax, created an urgent need to find new ways to prevent, detect, report, and respond to large-scale zoonotic diseases outbreaks. The country’s public health officials are concerned about many zoonotic diseases that pose a risk to people who work with livestock and other animals, especially in rural areas.

The app was launched in two rural provinces, Nan in the north and Srisaket in the east, for farmers, local health volunteers, and human and animal health officers to report increases in 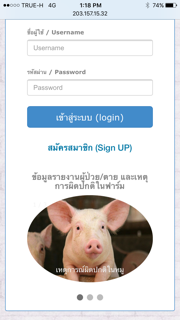 Different forms are available for farmers and health officers. Included above is an example of the login page to report abnormalities in pigs.

A Provincial One Health team monitors the data received using the app and when necessary, initiates rapid response to control potential outbreaks.

In addition to bringing together animal and human health experts for joint disease investigations using a One Health approach, the app allows provinces to receive support from the Ministry of Public Health when needed. The app reports are compiled and feed into a database hosted by the Bureau of Epidemiology, allowing for easier management of Thailand’s disease information.

In its pilot year, the app was used to initiate successful investigations of a case of Streptococcus suis infection and a possible Japanese encephalitis case. Local health volunteers reported both events, triggering joint disease investigations that helped to get the patients early treatment and follow-up care.   Officials plan to expand the project to three additional districts in 2018, with the hopes that it will continue to lead to faster, more effective outbreak investigations using a One Health approach.