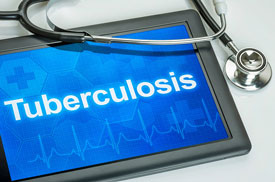 Transmission of tuberculosis (TB) is a risk in healthcare and other congregate settings where many people share the same space for extended periods of time. Prisons, jails, homeless and social assistance shelters, and emergency shelters are examples of congregate spaces where the spread of TB often occurs. Transmission of disease in these spaces is most likely to occur when patients, prisoners, or shelter clients have unrecognized TB or have received ineffective or incomplete treatment for known disease.

TB is a contagious and potentially life-threatening infectious disease caused by a bacterium called Mycobacterium tuberculosis. The TB bacteria are spread from person to person through the air. People with TB disease of the lungs or larynx release the bacteria into the surrounding area when they cough, sneeze, talk, or otherwise expel air, dispersing droplets that contain M. tuberculosis. These droplets can dry into tiny particles called droplet nuclei that remain suspended in air for long periods of time. Other people can breathe the infectious particles into their lungs and become infected. Infection usually requires prolonged sharing of airspace with a person actively spreading TB bacteria into the area. In rare cases, TB infection has been documented after short exposures to such persons with active TB. After becoming infected, most people’s immune systems are able to contain the infection, but are not able to eliminate it without help from anti-TB drugs. These people have latent TB infection and remain infected until corrective treatment is completed. Latent TB infection does not cause symptoms and is not contagious. However, without treatment, infected people can lose control of the infection and develop active, clinical disease. People with active TB have symptoms and can spread the disease. The risk of developing active TB disease is greatest in the first few years after infection, but some risk remains throughout life.

TB is preventable and, in most cases, treatable. Infection control practices can help reduce the risk of TB transmission. Treatment of persons with latent TB infection can prevent the subsequent development of active TB, and TB disease can usually be cured by available anti-TB drugs. Even persons with drug-resistant strains can often be cured by alternative regimens of medications.