Safety. Since our priority is motor vehicle safety at work, we’re excited to release this issue of Behind the Wheel at Work during National Safety Monthexternal icon.

We’re also excited to announce that we will co-host a road safety Twitter chat with the National Safety Council on June 28. Follow us on Twitter @NIOSH_MVSafety for updates.

Sleep. We asked, you answered. Thanks to your feedback on Volume 1 Number 2 of the newsletter, our Readers’ Choice topic this month is fatigued and drowsy driving.

What motor vehicle safety topics pique your interest? Keep sharing your ideas. Send them to kur4@cdc.gov.

NIOSH and the National Safety Council are co-hosting a road safety Twitter chat on June 28 from 1-2 p.m. ET. The chat is part of National Safety Month, the annual June observance focused on reducing leading causes of injury and death at work, on the roads, and in homes and communities. Tweet using the #DriveSafe4Life hashtag to join the conversation, and follow @NIOSH_MVSafety and @NSCsafety for road safety tips during the chat.

Behind the Wheel at Work is a way to connect you to researchers and subject matter experts who work with the CMVS. That being said, we see our website as the main place for work-related motor vehicle safety resources. Now that we’ve relaunched our site, you should find an improved user experience. Learn more about our strategic work, download our distracted driving animated GIF to share on social media, or visit the Motor Vehicle Safety at Work directory to get an overview of what we have to offer.

Authorize workers to stop driving if they are too tired to continue.

The difference between fatigued and drowsy driving

Fatigue is a known contributor to roadway crashes among commercial motor vehicle drivers, others who drive for work, and the general public. Not surprisingly, the issue of fatigued driving is a growing safety concern for government agencies, businesses, and safety advocates. However, in media reports and safety materials, we often see the terms “drowsy driving” and “fatigued driving” used interchangeably. But do they really mean the same thing?

Fatigue can affect anyone, and it can be difficult to predict. Whether cognitive impairments stem from lack of sleep, sleep disruptions, or other sources, it’s critical from a safety perspective to recognize when your driving skills may be compromised, and to take appropriate precautions.

Here are some strategies for reducing fatigue behind the wheel: 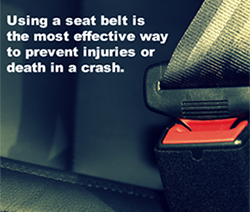 CMVS partner the Network of Employers for Traffic Safety (NETS) recently launched the 2Seconds2Click™ campaignexternal icon site to help employers save lives by promoting seat belt use on and off the job. Developed in collaboration with The Coca-Cola Company and supported by the National Highway Traffic Safety Administration, the site includes materials for the 6-week employee engagement campaign designed to educate workers on the importance of wearing a seat belt on every trip.

Not wearing a seat belt has a $4.9 billion direct effect on employer crash costs.external icon This includes crashes off the job involving employees and their dependents, in addition to on-the-job crashes.

It only takes about two seconds to buckle up. For workers, that small amount of time can make a big difference when it comes to reducing chances of injury or death in a crash. It may also mean the difference in how costly the crash is for employers.

“2Seconds2Click™ is a low-cost campaign, requiring very little management time, and the benefits from preventing an injury — or worse — are immeasurable,” said Jack Hanley, NETS’ Executive Director. “We encourage employers to take advantage of this easy-to-use toolkit that has been shown to produce results.”

As part of your workplace motor vehicle safety program, require the use of seat belts at all times by all drivers and passengers.

Approximately 2.6 million workers are employed as drivers of large trucks in the United States. Each year, about 4,000 people die in crashes involving large trucks and buses – truck drivers and passengers, as well as other road users. Fatigued or drowsy driving is widely recognized as a contributor to fatal crashes involving large trucks. Stress associated with working as a truck driver (e.g., irregular schedules, long work hours, and economic pressures) may put these drivers at risk for insufficient sleep and/or irregular sleep behaviors or patterns.

A study done by NIOSH in collaboration with the Virginia Tech Transportation Institute examined sleep patterns of 96 commercial truck drivers during their non-work periods and evaluated the influence of these sleep patterns on subsequent truck-driving performance during work periods. Driving performance was measured by safety-critical events (SCEs), which include crashes, near-crashes, crash-relevant conflicts, and unintentional lane deviations.

The statistical analysis grouped each work shift into one of four distinct sleep patterns:

Across all four sleep patterns, higher SCE risk was found among drivers who were male, had fewer years of truck-driving experience, or had higher body mass index (BMI). Pattern 2 shifts, which were characterized by shorter sleep time early in a non-work period, were associated with an increased rate of SCEs compared to Patterns 3 and 4, which had longer sleep periods. Pattern 2 shifts were also considerably less likely to have sleep during the time period between 1 and 5 a.m. compared to Patterns 1, 3, and 4.

Study results show the importance of drivers’ receiving adequate sleep the night prior to their driving and underscore the importance of providing drivers with sufficient sleep opportunities. The results of this study suggest that longer sleep duration has a measurable safety benefit by reducing SCE risk in the following shift.

Findings from this study highlight the importance of driver training and fatigue prevention among truck drivers. Prevention strategies include educating drivers on the safety benefits of adequate sleep, getting sleep between 1 and 5 a.m., and arranging sleep late in the non-working period if possible. More sleep tips are available in NIOSH’s Quick Sleep Tips for Truck Drivers.

Seat belt use among adult workers in 21 U.S. states

How can you keep workers safe on the road? Employers should establish comprehensive motor vehicle safety programs that require seat belt use at all times for all vehicle occupants (i.e., drivers and passengers) and reinforce seat belt safety in training meetings. Workers should use seat belts on every trip – no matter how short – and make sure passengers buckle up, too.

Catch up on our webinar, and let us know of any topics that interest you!

Please send your comments and suggestions to us at kur4@cdc.gov.