On October 5, 1999, a Captain (the victim), the driver, and a fire fighter from Engine 33 responded to a medical call that had been dispatched as a patient with shortness of breath. Traveling north, Engine 33 approached a four-way intersection that was crossed on the north side by an overpass supported by concrete columns and controlled by electronic traffic lights. The traffic signal was red for the engine’s direction of travel, so the driver initially reduced the engine’s speed, and then checking that traffic had cleared, increased the engine’s speed and began traveling through the intersection. At the same time, a civilian operating an automobile traveled through the intersection into the engine’s path. The driver of the engine was unable to avoid the automobile, and the two vehicles collided. The driver lost control of the engine which then struck one of the concrete columns supporting the overpass. The engine struck the column on the driver’s side, and the victim was ejected through the windshield, landing in a lane for oncoming traffic. The engine continued past the column and came to a stop in the same lane next to the victim. The driver was knocked unconscious, and the fire fighter riding in the rear crew compartment received minor injuries. The victim was flown by life flight helicopter to a nearby hospital where he was pronounced dead upon arrival. The two injured fire fighters were transported by ambulance to the hospital, where the driver was admitted in critical condition, and the fire fighter was treated for his injuries and released. The civilian driver of the automobile was not injured. NIOSH investigators concluded that, to minimize the risk of similar incidents, fire departments should 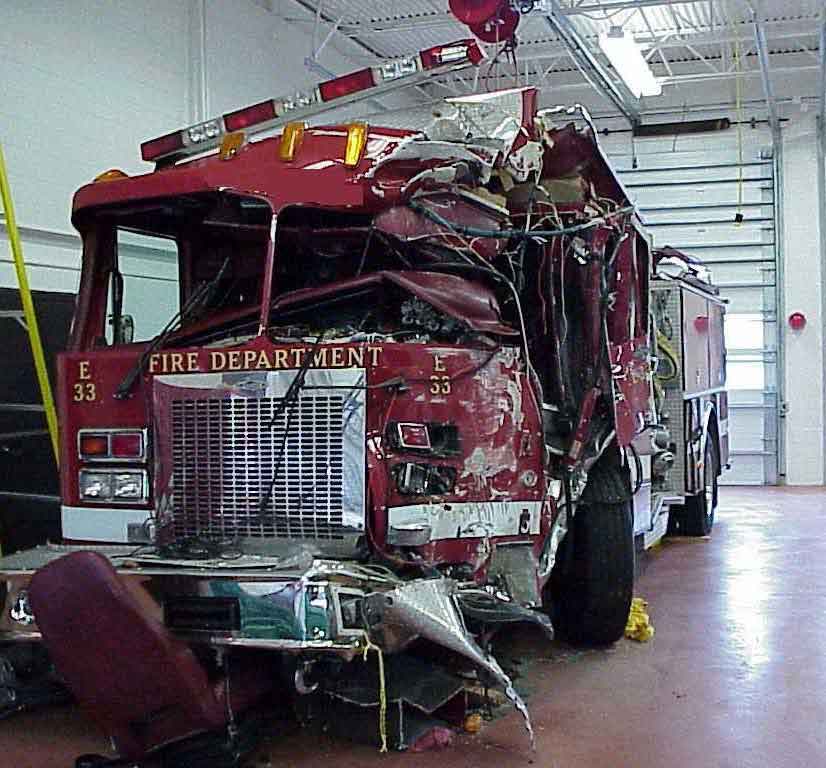 Engine Involved in This Incident

On October 5, 1999, a Captain (the victim) and two fire fighters were injured in a motor-vehicle crash while responding to a medical call. On October 7, 1999, NIOSH was notified of this incident by the U.S. Fire Administration. On October 18, 1999, two Safety and Occupational Health Specialists from NIOSH, Division of Safety Research, investigated this incident. Meetings were conducted with a local representative of the International Association of Fire Fighters (IAFF), Department of Public Safety (DPS) Officers, the fire department Chief, and other fire fighters from the department involved in the incident. Copies of photographs, training records, and department SOPs were obtained, and photographs were taken of the incident site and the engine. The career fire department involved in the incident serves a population of 42,000 in a geographic area of 75 square miles and is comprised of 60 members, 59 of whom are uniformed fire fighters. The department requires all new fire fighters to complete the State requirements for fire fighters, which consists of Level I and Level II fire fighting training as recommended by the National Fire Protection Association. Twenty hours of yearly refresher training is also required. The victim had 25 years of fire fighting experience.

On October 5, 1999, Central Dispatch received a call for a medical emergency at 0938 hours and per department protocol dispatched Engine 33 with a Captain (the victim) who was riding in the front passenger seat, a driver, and one fire fighter who was riding behind the driver in the rear crew compartment. A local emergency medical service (EMS) vehicle was also dispatched to the call described as a patient with shortness of breath. Engine 33 was traveling north when it approached a four-way intersection controlled by electronic traffic signals. An overpass supported by concrete columns crossed the north side of the intersection. As the engine approached the intersection, with siren and flashing lights, the signal for the engine’s direction of travel was red, and the driver reduced the engine’s speed to allow crossing traffic to clear. Traffic having cleared, the driver increased the engine’s speed to travel through the intersection. An automobile began traveling through the intersection into the engine’s path. To avoid striking the automobile, the driver applied the engine’s air brakes; however, he was unable to bring the engine to a stop and the two vehicles collided. The automobile collided with the driver’s side of the engine (Diagram 1), and upon impact, the driver lost control of the engine, which then struck one of the concrete support columns for the overpass (Diagram 2). The victim, who was not wearing his seat belt, was ejected through the windshield, and he landed in a lane for oncoming traffic. The engine traveled past the support column and came to a complete stop in the same lane next to the victim (Diagram 3). The driver, who was knocked unconscious, was restrained in his seat by his seat belt, and the other fire fighter was also restrained by his seat belt in the rear crew compartment. The fire fighter riding in the rear crew compartment saw the collision with the automobile and felt and heard the second impact. He became disoriented upon impact with the support column because glass and items in the cab–water cooler, gear, and self-contained breathing apparatus (SCBAs) had become airborne. By the time the engine had come to a stop, the fire fighter could refocus his attention, and he felt pain in one of his legs, which could have been attributed to the items in the cab becoming airborne. He tried to open both rear doors of the engine and discovered they were jammed, so he rolled down the rear passenger side window and slowly pulled himself out of the engine. He saw the severely injured victim lying approximately 15 feet away. The EMS vehicle, which had responded with the engine, pulled up, and the medical personnel provided assistance to the victim. The injured fire fighter limped to the other side of the engine to assist the driver who was still unconscious in his seat, and he limped to the back of the engine to obtain a medical bag. As he was returning to the driver he saw several civilians removing the driver from the engine, and he yelled to them to stop moving him. His warning came too late, and he directed the civilians to place the driver on the ground beside the engine. He started an airway and was providing other medical attention to the driver when an off-duty engineer and fire fighter from the department arrived. They quickly sized up the scene and turned their attention to the injured fire fighter. In the meantime the supervisor from the EMS vehicle decided to transport the victim to the hospital by life flight helicopter. A second life flight helicopter was requested, but it was delayed, so the driver and fire fighter were transported to the hospital in the same ambulance. The victim was pronounced dead upon arrival at the hospital, the driver was admitted in critical condition, and the fire fighter was treated for his injuries and released. The civilian driver of the automobile was not injured.

The medical examiner listed cause of death as blunt head trauma resulting from ejection from the motor vehicle.

Recommendation #1. Fire departments should ensure that drivers of emergency fire apparatus adequately reduce their speed to maintain vehicle control and proceed with caution through intersections.1, 2, 4, 5

Discussion: Highway/roadway intersections are extremely dangerous places for responding fire fighters and civilian motorists. When a responding emergency apparatus approaches an intersection against a traffic signal, even with the apparatus’ red lights and sirens activated, as required by law, the driver must be certain that the right of way has been yielded by all oncoming motorists before proceeding. The Chief of the department involved in this incident had issued a directive that required all drivers of fire apparatus and other department vehicles equipped with emergency warning devices to proceed cautiously when responding to emergencies. Proceeding cautiously included slowing to a speed “prepared to stop” when entering a traffic-controlled intersection or “coming to a complete stop” when necessitated by observable circumstances. According to NFPA 1500, Drivers/Operators of Fire Department Apparatus, during emergency response, vehicles will be brought to a complete stop under some referenced circumstances.

A red traffic light is one of the referenced circumstances. Fire departments should consider exploring the technology that exists for enhancing traffic control, such as intersection control devices that allow emergency vehicles to control traffic lights at intersections.

Recommendation #2. Fire departments should ensure that all fire fighters riding in emergency fire apparatus are wearing and belted securely by seat belts.1, 2

Discussion: Fire fighters make many life-and-death decisions during a tour of duty, and one of the most important is snapping on a seat belt after climbing aboard an emergency apparatus that has been called to respond. The fire department involved in this incident had a directive from the Fire Chief and a memo from a city official that required the use of seat belts by all employees while operating city vehicles. The Captain (the victim) was not wearing his seat belt and was ejected from the engine. Both the driver and the injured fire fighter were wearing their seat belts.

Recommendation #4. Fire fighters should ensure that all equipment within the fire apparatus driving and crew compartments is properly mounted or stowed.3, 4

Discussion: One of the most significant hazards to fire fighters involved in vehicle collisions is the equipment carried inside the apparatus. Equipment such as Self-Contained Breathing Apparatus (SCBAs), tools, gear, and portable radios can become projectiles in the event of vehicle acceleration, deceleration, or impact. The storage of these items in enclosed compartments or in brackets with mechanical means of securing the equipment is very important. In this incident, equipment and other items, including SCBAs, a water cooler and gear, became airborne upon impact. The occupants of the engine may have been struck and injured by these airborne objects. 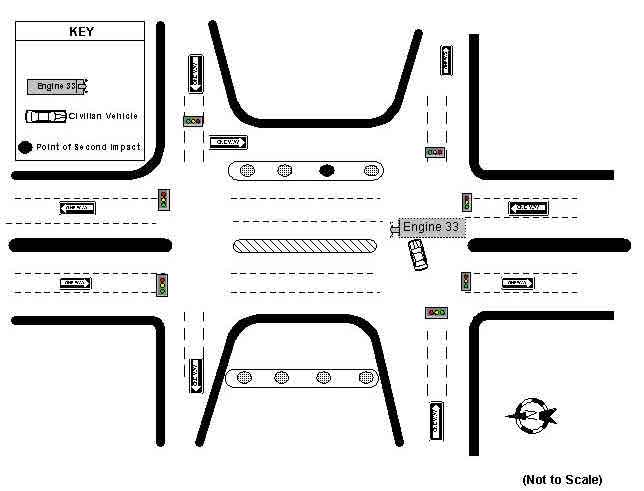 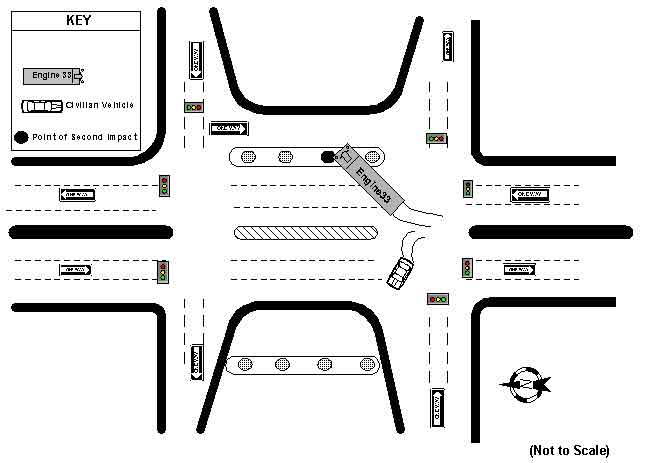 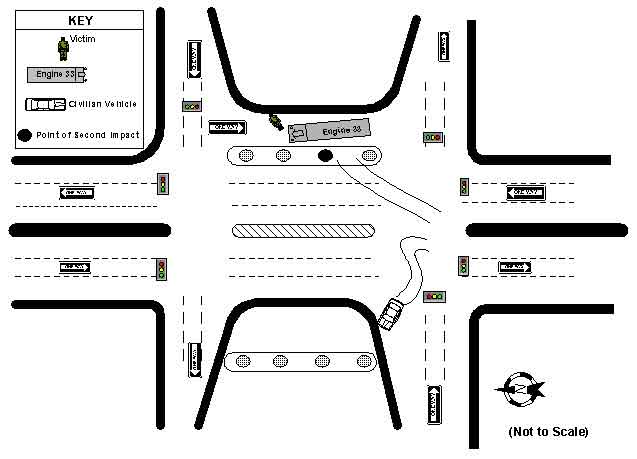 Photo. Engine Involved in This Incident