On September 15, 1999, a 31-year-old female volunteer fire fighter (the victim) died after being struck by an engine at the scene of a wildland/field fire. The victim was part of an initial-attack fire fighting crew which had been dispatched to a 430-acre wildland/field fire. The victim and the Chief from the fire department responded in an emergency command car. A fire fighter/driver of Engine 8911 responded to the scene after hearing the call for additional manpower over his radio. He approached the fire scene and positioned the engine on the southwestern side of a barn near the fire scene. He parked the engine and began pulling 200 feet of 1½-inch hose lays with the assistance of a civilian who was already at the scene. He and the civilian began wetting down the barn and fighting the fire in the field and spot fires as they occurred. When the Chief and victim arrived they began pulling and positioning additional hoses. As the driver, Chief, civilian and victim were wetting down the barn and fighting the fire in the field, the fire began to increase in size causing visibility to decrease and making it hard to breathe. The fire started progressing towards the engine and the driver decided to move the engine. Prior to moving the engine, the driver positioned himself on the tailboard of the engine and began to yell out loud “area clear” warnings. The driver remembered seeing the Chief, civilian, and victim all leaving the fire scene on foot moving in a westward direction. As the smoke intensified, the driver got in the engine, rapidly backed it in a westward direction and, once he cleared the barn, parked the engine (see Figure). The driver asked the Chief if everyone was accounted for and the Chief responded that the victim was missing. The driver decided to walk around the barn to search for the victim, but halfway around the barn became unable to see or breathe due to the intense smoke. Making his way back to the engine, the driver put on a Self-Contained Breathing Apparatus (SCBA) and continued his search for the victim. A few minutes later the driver located the victim lying motionless on the ground near the barn where the engine had been previously parked (see Figure). After informing the Chief, a radio request was made for medical assistance, and a fire fighter/Emergency Medical Technician (EMT) from the fire scene across the highway responded. The EMT announced that the victim was dead from obvious traumatic injuries to her head and face.

On September 15, 1999, a 31-year-old female volunteer fire fighter (the victim) died after being struck by an engine while fighting a wildland/field fire. The victim was attempting to make a safe egress from the wildland/field fire area after the engine driver had given the order to clear the area. The victim was subsequently run over by the engine and died at the scene. On September 16, 1999, the US Fire Administration notified the National Institute for Occupational Safety and Health (NIOSH) of the incident. On October 6, 1999, a Safety and Occupational Health Specialist, and the Team Leader from the NIOSH Fire Fighter Fatality Investigation and Prevention Program, investigated the incident. They conducted interviews with the Chief and members of the fire department involved in the incident, members of neighboring fire departments who responded to provide mutual aid, and the county sheriff’s investigating officer. The investigators visited the incident site and photographed the fire scene and engine. They obtained copies of witness statements, training records, the sheriff’s report, and a map of the fire scene. The fire department involved in this incident serves a population of 4,500 in a geographic area of 85 square miles and is comprised of 37 volunteer fire fighters. The State and the fire department requires new volunteer fire fighters to complete a 24-hour Basic Fire Fighter Training Program. The victim had 2 years of experience as a fire fighter.

Although numerous fire fighters provided mutual aid from neighboring volunteer fire departments, only the events involving the crew, which included the victim, will be discussed in this report.

On September 15, 1999, at 1310 hours, a wildland/field fire was reported to the County Public Safety, Fire/Rescue/Emergency Medical Service Communications. The fire was believed to have been started when dry corn stalks became entwined around the muffler of an all-terrain vehicle while the worker was taking soil samples in a harvested cornfield. The fire quickly spread through the primary field of harvested corn stalks to a field of non-harvested soy beans and across a highway to a field containing non-harvested corn. The fire burned approximately 430 acres of crop fields and threatened surrounding dwellings, barns, and sheds.

The victim, who was at the fire station when the call came in, responded with the Chief in an emergency command car and became part of the initial-attack fire fighting crew. Due to additional manpower and equipment needs, a fire fighter/driver of Engine 8911 responded after hearing the call over his radio. The engine was a 1974 Ford F-750, with a gross vehicle weight of 24,000 lbs. When the engine arrived on the fire scene it was directed by the Incident Commander (IC), who was coordinating the fire attack from a helicopter, to take a position beside a barn full of tobacco which was located in the fire area (see Figure). The driver backed the engine up to the southwestern side of the barn, which positioned the engine facing the driveway and escape route (see 1st Location of Figure). The driver parked the engine and began laying 200 feet of 1½-inch hose lays, with the assistance of a civilian. The driver and civilian began wetting down the barn and fighting the fire in the field and spot fires as they occurred. The driver moved the engine to the second location (see Figure) to extend the fire fighting efforts. When the Chief and victim arrived on the scene, the engine was positioned at location number two (see Figure). The Chief and victim began helping the driver and civilian by pulling and positioning additional hoses. At that time the fire started progressing towards the barn full of tobacco, and the driver requested the engine be moved to the third position (see Figure) to better protect the barn and fight the head of the fire. The Chief instructed the victim to move the engine to the requested location. The victim drove the engine to the third location, but rather than back the engine into place, she drove the engine parallel with the south side of the barn and parked the engine facing east. In this position, the only means of retreat for the engine was to back the engine in a westward direction. The fire spread to a sinkhole which was approximately 6 feet deep and 40 feet in diameter. The sinkhole, which was located next to the barn, was filled with lumber, creosote posts, tires, and miscellaneous combustible items. The fire began to grow in intensity creating dense smoke, and moved toward the engine and the barn filled with tobacco. The driver, concerned that the engine would be engulfed by the fire, positioned himself on the tailboard of the engine and began to yell out “area clear” for everyone to get out of the immediate area. Due to the direction and intensity of the fire and smoke, the Chief, victim, and civilian were told by the driver to move in a westward direction, away from the fire fighting scene to a safe area. The fire continued to intensify due to gusting winds and a whirlwind effect created by the dry terrain and winds in the surrounding open fields. The fire became increasing larger and hotter and the smoke made it difficult to see and breathe. The driver remembers seeing the Chief, civilian, and the victim all leaving the fire scene on foot in a westward direction toward a farmhouse located on the property. At that time, the driver pulled and positioned the two fire hoses so he would not run over them, and looked around the engine, but had limited visibility due to the thick smoke. The driver got in the engine and rapidly backed the engine in a westward direction. Once he cleared the barn he parked the engine on the north side of the barn (see Final Location on Figure). It was reported by the civilian that the smoke was so thick that he could not see anything. The civilian remembered hearing someone shout “Run, run, run,” and feeling the hose he was using being pulled out of his hands.

The Chief was discussing the safety of the farmhouse with another crew that had just arrived on scene, when the driver asked the Chief if everyone was accounted for. The Chief responded that the victim was missing. The driver decided to walk around the barn to search for the victim, but halfway around the barn became unable to see or breathe due to the intense smoke. Making his way back to the engine, the driver donned a Self-Contained Breathing Apparatus (SCBA) and continued his search for the victim. His search took him around the barn in the area where the engine had been previously parked. He found the victim lying motionless on the ground to the south of the barn in the area where the engine had been parked. The victim had sustained severe traumatic injuries from being run over by the engine. The driver informed the Chief of the incident and a radio request for medical assistance was made. An EMT who was on the fire scene across the highway responded. The EMT checked the victim and announced that the victim was dead due to the obvious traumatic injuries to her head and face. The County Coroner arrived on the scene to start an investigation, and the victim was transported to the morgue.

The death certificate listed the cause of death as a massive skull fracture.

Recommendation #1: Fire departments should implement an incident command system (ICS) with written standard operating procedures (SOPs) for all fire fighters, and ensure that they are trained on the system.1-4

Discussion: The implementation of an ICS with written SOPs should establish roles and responsibilities for personnel accountability and safety, and should provide a well-coordinated approach to all emergency activities. All fire department personnel should be thoroughly trained on this system and receive periodic refresher training. All training should be documented. Under an ICS, the driver would have had assistance with the operation of the Engine and the fire fighting efforts, and would not have been dependent on civilian assistance. The following procedures should be in place:

The spotter (scout) should wear highly visible clothing, be equipped with reliable hand lights and a communications radio, and stay within the driver’s field of view at all times. The spotter (scout) may help locate and avoid obstacles which may be unseen because of reduced visibility due to darkness or smoke.

Discussion: The following 10 Standard Fire Orders, as developed by the National Wildfire Coordinating Group, should be learned, communicated, and followed by every fire fighter who is involved in wildland fire fighting operations: 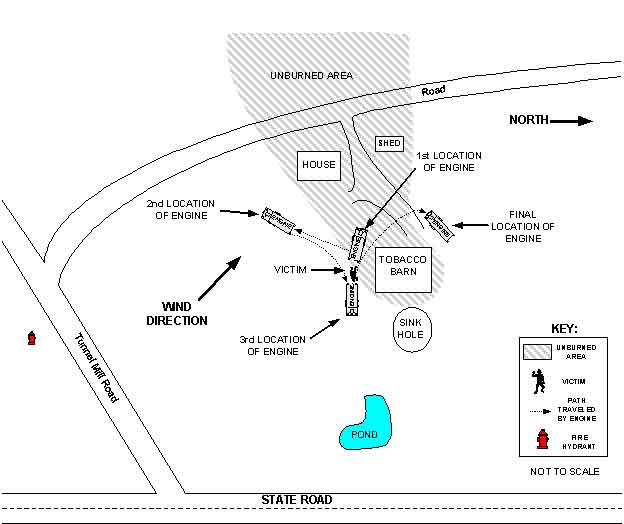