On June 23, 1999, a 20-year-old male volunteer fire fighter (the victim) was electrocuted while fighting a grass fire. The fire department was dispatched to the grass fire at 1657 hours and while en route, was notified by Central Dispatch of a possible downed power line. The initial call indicated that a branch from a large oak tree had fallen onto an overhead power line, knocking the line to the ground and igniting the surrounding grass. The first responding unit, Attack Truck 150, confirmed a downed power line. The Chief arrived on scene and parked his vehicle near the downed power line to warn all fire fighters of its location. The victim arrived in his privately owned vehicle, immediately went to the location of Engine 252, and helped the Deputy Chief and a fire fighter/paramedic extinguish the fire on the east flank. The Deputy Chief then pulled the engine into the burned-out area to hit hot spots and start mop-up operations. Once Engine 252 was repositioned, the victim asked the Deputy Chief if he could extinguish a smoldering pile of brush near a structure. The victim then walked approximately 50 feet from the engine toward the smoldering pile of brush, extinguished it, and walked toward another smoldering pile of brush near the downed power line and adjacent to the roadway. As the victim pulled a charged 1-inch line over the uneven terrain (Figure 1), he apparently tripped and fell, contacting the downed power line. He fell to the ground face first, landing on the 6,700-volt, single-phase power line. Another fire fighter retrieved a nonconductive tool from the engine and pulled the power line from beneath the victim. Two fire fighters moved the victim to the road and started Cardiopulmonary Resuscitation (CPR) until the ambulance arrived and took the victim to a local hospital where he was pronounced dead. NIOSH investigators concluded that, to help minimize the risk of similar occurrences, fire departments should:

On June 23, 1999, a 20-year-old male volunteer fire fighter was electrocuted while fighting a grass fire. The victim was attempting to extinguish a smoldering pile of brush when he came in contact with a downed power line. On June 29, 1999, the U.S. Fire Administration notified the National Institute for Occupational Safety and Health (NIOSH) of the incident. On July 29, 1999, a Safety and Occupational Health Specialist and the Team Leader from the NIOSH Fire Fighter Fatality Investigation and Prevention Program investigated the incident. Interviews were conducted with the Chief, Deputy Chief, other members of the fire department who responded to the incident, and one witness. The incident site was visited and the fire scene photographed. Copies of witnesses’ statements, training records, standard operating procedures (SOPs), and the death certificate were obtained, as well as a map of the fire scene. The combination fire department (paid and volunteer fire fighters) involved in the incident serves a population of 10,000 in a geographic area of 42.5 square miles and is comprised of 7 paid and 18 volunteer fire fighters. The victim was wearing full wildland turnout gear at the time of the incident. The site of the incident was a plowed, grassy field with walnut trees interspersed. Approximately 2 acres were burned. The State requires all career fire fighters to complete training equivalent to National Fire Protection Association (NFPA) Level I. Volunteer fire fighters are provided training once a week for a period of 3 years through the department’s 8-hour volunteer academy. The victim had 9 months of fire fighting experience.

On June 23, 1999, at 1657 hours, Central Dispatch was notified of a grass fire. A branch from a large oak tree had fallen onto and broken a 6,700-volt single-phase overhead power line. The power line fell to the ground and started a grass fire. Central Dispatch notified the fire department at 1658 hours of the grass fire with a possible downed overhead power line. At 1702 hours Attack Truck 150 (a pickup truck with a 200-gallon water tank) responded with one fire fighter and was first on the scene. The Chief arrived in his unit at 1704 hours and assumed command. Engine 252 arrived at 1705 hours with the Deputy Chief (driver) and one fire fighter/paramedic (Fire Fighter #1). The victim arrived by his privately owned vehicle at approximately the same time that Engine 252 took position on the east flank of the fire. Engine 250 arrived on scene at 1710 hours, with a fire fighter (driver) and a volunteer fire fighter/paramedic (Fire Fighter #2), and took position on the west flank.

The fire fighter from Attack Truck 150 radioed Central Dispatch with a size-up of a grass fire with a slow rate of spread and light fuel, and he confirmed a downed power line. Central Dispatch advised all responding units that a power line was down and to use caution. The Chief parked his unit approximately 25 feet from the downed power line so that arriving units would stay clear of it (Figure 1). At 1705 hours the Chief radioed Central Dispatch to contact the local power company and requested a representative be sent to the site to de-energize the power. Note: The power company technician working that day was at another job approximately 45 minutes from the fire scene. As Engine 252 was positioning on the east flank, the Chief advised the Deputy Chief and Fire Fighter #1 of the location of the downed power line. Meanwhile, the victim was assisting Fire Fighter #1 in pulling a 1 ½-inch line while the Deputy Chief ran the pump. The three fire fighters started their attack in front of the engine, and within minutes the fire on the east flank was under control. Upon arrival of Engine 250, the Chief advised the driver to turn into the field and attack the west flank (Figure 2). The Chief also advised both fire fighters on Engine 250 of the location of the downed power line. They observed the power line while driving toward the west flank. The driver of Engine 250 pulled a 1-inch hand line off the engine while Fire Fighter #2 hit the flames on the west flank. Within minutes of arriving on the scene, the fires on both flanks were extinguished. The Deputy Chief told Fire Fighter #1 to disconnect, stretch, and drain the 1 ½-inch line. The Deputy Chief then pulled Engine 252 into the burned area to hit hot spots and conduct mop-up operations. Once the engine was repositioned, the victim asked the Deputy Chief if he could extinguish a smoldering pile of brush near a structure. The Deputy Chief told the victim to go ahead. The victim then pulled a 1-inch hand line off the engine and walked approximately 50 feet from the engine to extinguish the smoldering pile of brush. Fire Fighter #1 walked around the engine to grab a McLeod tool (a type of hoe used to overturn dirt) and a 5-gallon water pack. At the same time both fire fighters from Engine 250 dragged their hose line approximately 100 feet across the field to extinguish another pile of smoldering brush (Figure 2). The victim extinguished the smoldering pile of brush then walked toward another pile of brush near the downed power line. As the victim walked with a charged line toward the second pile of brush, he crossed in front of the nozzle man from Engine 250, who proceeded to hit the smoldering brush. Shortly after passing the nozzle man, it is believed that the victim tripped over the rough, plowed field and fell face first, landing directly on the 6,700-volt downed power line. Several witness (bystanders and fire fighters) standing near the victim called out “Fireman down!” Note: While the victim was walking toward the downed power line, the Chief, other fire fighters on the fireground, and several bystanders, who were all within approximately 100 feet of the victim, thought the victim was aware that he was getting close to the line. When he kept moving toward it, they yelled to him that he was near the power line; however, he had already come in contact with it. At 1717 hours the Chief radioed Central Dispatch for the power company’s estimated time of arrival and requested an ambulance for a man down. Fire Fighter #1 called to the Deputy Chief, who was behind the engine controlling the water pressure, to turn off the water. He then ran to get the McLeod tool he had retrieved earlier and used the nonconductive tool to pull the downed power line from under the victim. Two fire fighters rolled the victim over and observed that he had black soot on his face and blood coming from his nose. The victim had no pulse, and he was not breathing. They moved him onto the road and started Cardiopulmonary Resuscitation (CPR) until 1724 hours, when the ambulance arrived. The victim was transported to a local hospital where he was later pronounced dead.

The death certificate listed the cause of death as sudden death from electrocution.

Recommendation #1: Fire departments should ensure that fire fighters stay away from downed power lines at a distance equal to at least one span between poles until the line is de-energized.1,2

Discussion: Fundamentals of Wildland Fire Fighting states that when downed power lines come in contact with the ground, current flows outward in all directions from the point of contact (ground gradient). The energized area can extend several feet from the point of contact. Therefore, fire fighters could be electrocuted by walking into this area. To avoid this hazard, fire fighters should keep ample distance away from the downed power line (equal to one span between poles) until the power is de-energized. If, upon arrival, the fire has not burned past the distance equal to one span between poles, fire departments should delay their attack until the fire has burned past this recommended span. By keeping a safe distance away from downed power lines, fire fighters can reduce the chance of being injured or killed through contact with an energized power line.

Recommendation #2: Fire departments should ensure protective shields, barriers, or alerting techniques are used to protect fire fighters from contacting energized electrical conductors. Alerting techniques should include safety signs and tags, barricades, or if no other means are available, an attendant stationed to warn and protect fire fighters.3

Discussion: Alerting techniques and barriers visually provide fire fighters with a more accurate location of an electrical hazard. Although the Chief’s vehicle was positioned approximately 25 feet from the downed power line, no other warning devices were used to alert fire fighters/bystanders of the line’s location. Many people on the fireground, including the Chief and other fire fighters, stated they thought the victim was aware of the location of the downed line. When the victim was in the area of the power line, several people yelled to him but by that time he had already come in contact with the line.

Recommendation #3: Fire departments should ensure fire fighters are aware of the hazards when working around energized parts or equipment.4

Discussion: Training should be provided and include safe work practices for employees to avoid the risk of being injured or killed while working in areas with energized parts. The victim was a volunteer fire fighter and was not covered by OSHA regulation. However, fire departments could use OSHA safety standard 29 CFR 1910.332 (b) as a source of information and provide training to fire fighters who face the risk of electrical shock. The local power and gas company had provided training to the fire department. The utility company’s training, offered free upon request to all departments, included information about electrical and gas safety, hazards of a downed power line, effects of arcing, etc. The last training conducted by the utility company was offered in 1998, before the victim was a member of the department. 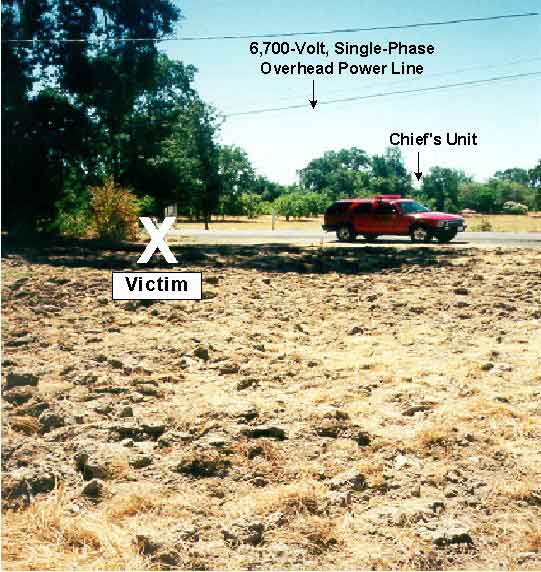 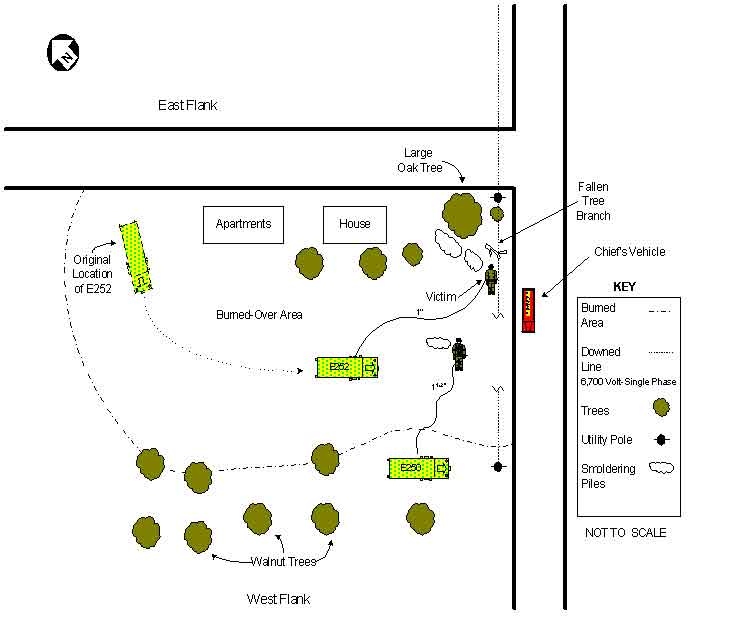