On April 6, 2013, a 53-year old male career captain died from injuries suffered from a fall during roof operations at a commercial structure fire. The initial box alarm was for smoke in the basement of a fabric store. Approximately 30 – 45 minutes after smelling the odor of smoke, the store owner went to the basement to investigate and found a fire in the rear of the basement (southwest corner). He attempted to extinguish the fire with a portable fire extinguisher, but due to smoke and fire, he was forced to leave the basement. The 1st Alarm for companies assigned to Box 1232 had a difficult time finding the seat of the fire due to the amount of heat and smoke. Crews also struggled to gain access to the basement due to fabric and other products limiting aisle space. After the 2nd Alarm was struck, the Incident Commander ordered Ladder 27 (L27) to the roof to make a trench cut between the fire building and the Bravo Exposure. L27 accessed the roof from Side Charlie and were preparing to walk to the Bravo Exposure. The captain of L27 took several steps towards Side Alpha of the roof, which was obscured by smoke, and fell to the roof of a one-story storage building attached to the fire building. The captain died instantly. The other members of L27 heard the sound of the captain landing on the roof of a storage building. The driver/operator of L27 ordered the crew to their knees, conducted a personnel accountability report, and realized the captain was missing. The crew from L27 got off the roof and tried to locate the captain. They found him lying on the roof of the storage building and made several rescue attempts. Before the captain could be removed, the storage building roof collapsed into the basement of the fabric store. Rescue operations were started by breeching the wall of the storage building. Approximately 2 hours later, the captain was removed from the structure. 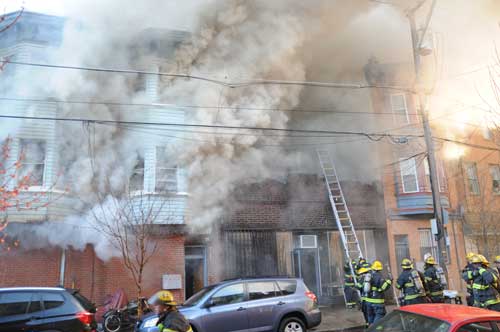 The crew of Ladder 27 was using a ground ladder to gain access to the roof of the fire building. The apartments with the bay windows are above the basement of the fabric store where the fire originated. This is showing Side Delta at the “C/D” corner of the incident.
(Photo courtesy of the fire department)