On January 22, 2013, a 34-year-old male volunteer captain (the victim) died when the floor collapsed and trapped him in the basement at a residential structure fire. Crews were attempting to locate and extinguish fire that might have spread from a nearby shed fire that they were dispatched to. While a crew was fighting fire that had spread into the basement, the victim and his partner where pulling the ceiling just inside the front door to extinguish the fire that had spread to the attic. The floor collapsed sending them both into the basement. The victim’s partner was able to make it back up to the first floor doorway. He attempted to assist the victim out of the basement, but was unable to pull him up. The hole that the fire fighter had fallen through became untenable due to the fire conditions and fire fighters were unable to rescue him from the basement. The victim was recovered from the basement approximately 20 minutes later. Before he could be rescued, the victim’s mask became thermally degraded and he was overcome by the products of combustion. He was transported to a local hospital where he was pronounced dead 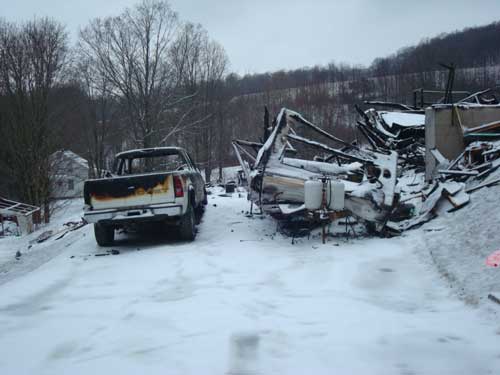 Shed fire location in front of camper and truck which spread to house.
(NIOSH Photo)