On January 14, 2010, a 55-year-old male volunteer fire fighter (FF) responded to a mobile home fire. The FF performed exterior overhaul (mop-up) operations for approximately 14 minutes, when he suddenly collapsed. Crew members provided cardiopulmonary resuscitation (CPR) as an ambulance was requested. The ambulance arrived, provided advanced life support, and transported the FF to the local hospital’s emergency department (ED). CPR and advanced life support continued in the ED until the ED physician pronounced him dead. The death certificate listed “sudden cardiac death” as the cause of death. No autopsy was performed nor were any carboxyhemoglobin levels measured to test for carbon monoxide exposure. Given the FF’s probable underlying coronary artery disease (CAD), NIOSH investigators concluded that the physical exertion involved in responding to the call and performing exterior overhaul triggered his sudden cardiac death.

NIOSH investigators offer the following recommendations, which may have prevented the FF’s death.

On January 14, 2010, a 55-year-old male volunteer FF collapsed after performing mop-up at a structure fire. NIOSH was notified of this fatality on January 19, 2010, by the U.S. Fire Administration. NIOSH contacted the affected Fire Department (FD) on February 5, 2010, to gather additional information, and on September 14, 2010, to initiate the investigation. On September 27, 2010, a safety and occupational health specialist from the NIOSH Fire Fighter Fatality Investigation Team conducted an on-site investigation of the incident.

During the investigation, NIOSH personnel interviewed the following people:

Incident. On January 14, 2010, the FD was dispatched at 1315 hours to a fire in a mobile home. At 1317 hours, the FF requested mutual aid and at 1321 hours, the FF arrived on the scene. The fire began in the woods around a 14′ x 80′ mobile home (see photograph), then spread to the front yard and eventually involved the exterior of the home.

The mutual aid fire department arrived on the scene at 1329 hours and began fire suppression efforts. The fire was declared under control at 1334 hours, 1 minute before units from the FF’s FD arrived on the scene. The FF used a forestry rake to overhaul the grass/woods fire while other fire fighters overhauled the mobile home. After completing this task, the FF walked around the structure to check the electric meter and gas utilities. After returning to the front of the structure and conferring with the County EMA Director, the FF began talking with a crew member. The FF stated that he felt dizzy, and then he collapsed.

The crew member alerted the EMA Director who found the FF unresponsive, with no pulse, and with agonal breathing (irregular, gasping breaths). An ambulance was requested (1349 hours) as CPR was begun and oxygen was administered via bag-valve-mask. The ambulance arrived on the scene at 1355 hours with two paramedics.

Paramedics found the FF unresponsive, with no pulse, with agonal breathing, and CPR in progress. The agonal breathing lasted about 10 seconds before the FF stopped breathing altogether. A cardiac monitor was applied, revealing ventricular fibrillation; two shocks were delivered. The FF’s heart rhythm reverted to pulseless electrical activity. CPR continued as the FF was placed into the ambulance, which departed the scene at 1403 hours.

En route to the ED, an intravenous line was placed, and cardiac resuscitation medications were administered. Despite suctioning of his airway, the large amount of emesis precluded intubation. The FF’s heart rhythm changed to ventricular fibrillation and he was shocked again, which converted his heart rhythm to ventricular tachycardia at 144 beats per minute. The paramedic notes indicated the FF may have had a weak pulse at this time. The ambulance arrived at the ED at 1405 hours, and the FF’s care was transferred to the ED staff.

Inside the ED, advanced life support continued, including intubation. At 1411 hours, the cardiac monitor revealed asystole. The FF was shocked again with no positive change in his heart rhythm. Resuscitation efforts continued until 1430 hours, when the attending physician pronounced the FF dead.

Medical Findings. The death certificate listed “sudden cardiac death” as the cause of death. No autopsy was performed. The FF’s blood was not tested for carboxyhemoglobin (a measure of carbon monoxide exposure).

The FF’s known risk factors for coronary artery disease included possible hypertension (high blood pressure) and family history of CAD (father died of a heart attack at age 49). According to another brother, the FF was prescribed no medications and was a former cigarette smoker.

In 2008 the FF visited his primary care physician after suffering a rib fracture. His blood pressure was elevated (165/92 millimeters of mercury [mmHg]), but this is common in patients with acute pain. A subsequent blood pressure measurement taken 1 week later was also elevated (160/89 mmHg) suggesting the FF may have had untreated hypertension. A chest x-ray revealed a normal heart size and clear lungs.

The day of this incident the FF had responded to the structure fire and performed exterior overhaul, expending about 7 metabolic equivalents (METs), which is considered moderate physical activity [AIHA 1971; Gledhill and Jamnik 1992]. During the weeks and months prior to this incident, the FF had not expressed symptoms or signs of heart problems. 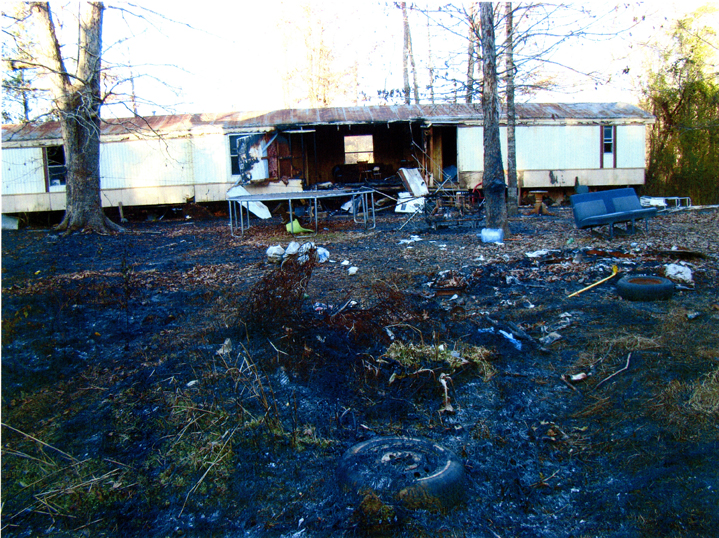 DESCRIPTION OF THE FIRE DEPARTMENT

Fitness/Wellness Programs. The FD has a voluntary program that pays half the cost of monthly membership to a local fitness center provided the member uses the facility a minimum of 6 times per month.

The narrowing of the coronary arteries by atherosclerotic plaques occurs over many years, typically decades [Libby 2008]. However, the growth of these plaques probably occurs in a nonlinear, often abrupt fashion [Shah 1997]. Heart attacks typically occur with the sudden development of complete blockage (occlusion) in one or more coronary arteries that have not developed a collateral blood supply [Fuster et al. 1992]. This sudden blockage is primarily due to blood clots (thromboses) forming on top of atherosclerotic plaques.

Establishing the occurrence of a recent (acute) heart attack requires any of the following: characteristic electrocardiogram (EKG) changes, elevated cardiac enzymes, or coronary artery thrombus. In this case, the FF’s heart rhythm precluded the ability to see EKG changes consistent with a heart attack. His cardiac enzymes at death were normal, but the FF died before the enzymes would be expected to increase. These enzymes take at least 4 hours after a heart attack to become positive. No autopsy was performed to determine if a coronary artery thrombus was present. Based on the clinical scenario, however, it is likely the FF experienced a heart attack.

Occupational Medical Standards for Structural Fire Fighters. To reduce the risk of sudden cardiac arrest or other incapacitating medical conditions among fire fighters, the NFPA developed NFPA 1582, Standard on Comprehensive Occupational Medical Program for Fire Departments [NFPA 2007a]. This voluntary industry standard provides (1) the components of a preplacement and annual medical evaluation and (2) medical fitness for duty criteria. The FF’s elevated blood pressure was identified in 2008 but this condition by itself would not have caused fire fighter duty restrictions. However, elevated blood pressure together with the FF’s other CAD risk factors warrant a referral for an exercise stress test.

The FF probably had two of the five CAD risk factors and he was older than 45 years of age. Therefore, an exercise stress test should have been performed. Given the FF’s probable undiagnosed CAD, the stress of responding to the call and performing exterior overhaul probably triggered his sudden cardiac death. Had a stress test been performed, perhaps the CAD would have been identified, resulting in further evaluation and treatment.

NIOSH investigators offer the following recommendations, which may have prevented the FF’s death.

Guidance regarding the content and frequency of these medical evaluations can be found in NFPA 1582 [NFPA 2007a]. These evaluations are performed to determine fire fighters’ medical ability to perform duties without presenting a significant risk to the safety and health of themselves or others. However, the FD is not legally required to follow this standard. Applying this recommendation involves economic repercussions and may be particularly difficult for small volunteer fire departments to implement.

To overcome the financial obstacle of medical evaluations, the FD could urge current members to get annual medical clearances from their private physicians. Another option is having the annual medical evaluations completed by paramedics and emergency medical technicians (EMTs) from the local EMS (vital signs, height, weight, visual acuity, and EKG). This information could then be provided to a community physician (perhaps volunteering his or her time), who could review the data and provide medical clearance (or further evaluation, if needed). The more extensive portions of the medical evaluations could be performed by a private physician at the fire fighter’s expense (personal or through insurance), provided by a physician volunteer, or paid for by the FD, City, or State. Sharing the financial responsibility for these evaluations between fire fighters, the FD, the City, the State, and physician volunteers may reduce the negative financial impact on recruiting and retaining needed fire fighters.

Recommendation #2: Ensure that fire fighters are cleared for return to duty by a physician knowledgeable about the physical demands of fire fighting, the personal protective equipment used by fire fighters, and the various components of NFPA 1582.

Guidance regarding medical evaluations and examinations for structural fire fighters can be found in NFPA 1582 [NFPA 2007a]. According to this guideline, the FD should have an officially designated physician who is responsible for guiding, directing, and advising the members with regard to their health, fitness, and suitability for duty. The physician should review job descriptions and essential job tasks required for all FD positions and ranks to understand the physiological and psychological demands of fire fighters and the environmental conditions under which they must perform, as well as the personal protective equipment they must wear during various types of emergency operations. The FF last saw his primary care physician in 2008 for a rib fracture, and his medical records never mention medical clearance for duty.

Recommendation #3: Phase in a comprehensive wellness and fitness program for fire fighters.

Given the FD’s structure, the NVFC program might be the most appropriate model [USFA 2004]. NIOSH recommends a formal, structured wellness/fitness program to ensure all members receive the benefits of a health promotion program.

NFPA 1500, Standard on Fire Department Occupational Safety and Health Program, requires the FD to develop physical performance requirements for candidates and members who engage in emergency operations [NFPA 2007b]. Members who engage in emergency operations must be annually qualified (physical ability test) as meeting these physical performance standards for structural fire fighters [NFPA 2007b].

The Occupational Safety and Health Administration (OSHA) Revised Respiratory Protection Standard requires employers to provide medical evaluations and clearance for employees using respiratory protection [29 CFR 1910.134]. These clearance evaluations are required for private industry employees and public employees in States operating OSHA-approved State plans [OSHA 2010]. Mississippi does not operate an OSHA-approved State plan. Therefore, the FD is not required to comply with this standard. However, NIOSH recommends voluntary compliance to ensure that all members are medically cleared to wear an SCBA.

The OSHA respiratory protection standard requires employers whose employees are required to use a respirator (e.g., an SCBA) to have a formal respiratory protection program, including annual fit testing [29 CFR 1910.134]. As mentioned previously, Mississippi is not an OSHA-approved State-plan state; therefore, the FD is not required to follow this OSHA standard [OSHA 2010]. Again, NIOSH recommends voluntary compliance.

Recommendation #7: Perform an autopsy on all on-duty fire fighter fatalities.

In 2008, the USFA published the Firefighter Autopsy Protocol [USFA 2008]. With this publication, the USFA hopes to provide “a more thorough documentation of the causes of firefighter deaths for three purposes:

1. to advance the analysis of the causes of firefighter deaths to aid in the development of improved firefighter health and safety equipment, procedures, and standards;

2. to help determine eligibility for death benefits under the Federal government’s Public Safety Officer Benefits Program, as well as state and local programs; and

3. to address an increasing interest in the study of deaths that could be related to occupational illnesses among firefighters, both active and retired.”