On July 28, 2003, at approximately 1730 hours, a 23-year-old male volunteer lieutenant (the driver/victim) was killed and a 19-year-old male volunteer fire fighter (the passenger) was seriously injured during a single-vehicle rollover crash while responding in a privately owned vehicle (POV) to a confirmed trailer fire. The POV was traveling southbound an estimated 80 miles per hour (mph) on a two-lane State road when it drifted off the right side of the roadway. The lieutenant lost control after he apparently overcorrected while attempting to bring the POV back onto the roadway. The POV overturned several times, struck a wood utility pole, and ejected both fire fighters. Emergency medical services responded within minutes of the incident, and the victim was flown to the hospital via life-flight helicopter where he was pronounced dead. The passenger was transported to the hospital via road ambulance.

NIOSH investigators concluded that, to minimize the risk of similar occurrences, fire departments should: 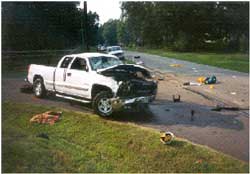 On July 28, 2003, a 23-year-old male volunteer fire fighter/Lieutenant (the driver/victim) was killed and a 19-year-old male volunteer fire fighter (the passenger) was seriously injured after being ejected in a single vehicle rollover crash. On July 29, 2003, the U.S. Fire Administration (USFA) notified the National Institute for Occupational Safety and Health (NIOSH) of this fatality. On August 15, 2003, a Safety and Occupational Health Specialist from the NIOSH Division of Safety Research, Fire Fighter Fatality Investigation and Prevention Program, investigated the incident. The NIOSH investigator met with a representative of the North Carolina Department of Insurance – Office of the State Fire Marshal, and the Chief of the fire department. In addition, the NIOSH investigator interviewed fire fighters who responded to and were directly involved in the incident, visited the crash site, and took photographs and measurements. The investigator also reviewed the department’s SOGs, Rules and Regulations, the victim’s fire-service related driver training records, witness statements, the State Fire Marshal’s report, traffic report, and the medical examiner’s report.

Fire Department
The volunteer fire department involved in the incident consists of 40 active fire fighters with two stations. The department serves a population of approximately 5,000 covering about 25 square miles. At the time of the incident the department had Rules and Regulations that stated “Firemen shall obey any and all established rules, regulations, and standard operating guidelines.”(SOGs) The department had SOGs in place related to POV operation that included “All NC state laws (traffic and otherwise) apply to POVs responding to emergencies,” and “the driver shall always maintain a speed consistent with safe operation of the vehicle under the prevailing conditions.” Additionally, the department’s SOGs state that “Private owned vehicles are not exempt from the State and local laws when responding.”

Training and Experience
The victim had been a volunteer fire fighter for approximately 6 years, having served the fire service in some capacity since becoming a junior fire fighter at 17-years old. The department offers training and refresher courses throughout the year in a variety of topics. As of June 2003, the victim had completed approximately 101 hours of training which included a 16-hour emergency vehicle operations course (EVOC) and a 4-hour defensive driving course. In addition to being a fire fighter, the victim was a certified emergency medical technician (EMT). The victim had a valid driver’s license in good standing with the State of North Carolina at the time of the incident.

Equipment and Personnel
The POV involved in the incident was a 2000 model year full-size extended cab pick-up truck. The vehicle was purchased new by the victim. There was emergency lighting on the front of the vehicle for use during response, which was in use at the time of the incident.

Weather and Road Conditions
The incident occurred at approximately 1730 hours on a straight two-lane State road with double yellow (no passing) lines down the middle. The road has an asphalt surface without shoulders [Photo 1]. The pavement edge is relatively level with grass on each side of the roadway. The day of the incident was clear and the road was dry. The posted speed limit is 55 miles per hour.

On July 28, at 1726 hours, the volunteer fire department involved in the incident was dispatched to a confirmed residential trailer fire. According to witness statements, the lieutenant and fire fighter were seen leaving the fire department approximately 5 minutes prior to the dispatch. They were reportedly traveling to the passenger’s home when they received the report of a confirmed fire on the radio. The victim and passenger radioed dispatch and announced that they would be responding via the victim’s POV. At 1731 hours, the dispatch center received a 911 call informing them of the motor vehicle incident. Emergency medical services (EMS) and other fire department personnel were dispatched to the scene and arrived at 1734 hours.

It was determined by the North Carolina Highway Patrol investigator that the POV involved in the incident was traveling southbound on a State road at an estimated 80 miles per hour when it drifted off the right side of the roadway. In an attempt to recover, the victim apparently overcorrected which caused the POV to re-enter the roadway sideways. According to the State highway patrol’s report, it was determined that the sideward motion caused the vehicle to enter into a skid and ultimately catch and roll-over three times before striking a wood utility pole on its fourth roll. After striking the pole the vehicle continued south and rolled a fifth time before coming to rest on its wheels/frame facing east after ejecting both fire fighters. There was extensive damage to the outside of the vehicle on the driver’s side and moderate damage to the passenger side [Photo’s 2 & 3]. The victim was found approximately 87 feet from the final resting place of the vehicle. The passenger landed near the right side of the vehicle in a ditch and received serious but non-life threatening injuries.

According to the medical examiner’s report, the cause of death was “acute intracranial injuries.”

Discussion: According to the NIOSH Publication: Work-Related Roadway Crashes: Challenges and Opportunities for Prevention, employers (e.g. fire departments) should “Implement and enforce mandatory seat belt use policies,” and employees (e.g. fire fighters) should “Use safety belts while driving on or off the job.” Mandatory use of seatbelts may be the single most important driver safety policy that can be implemented and enforced. According to the NHTSA publication: Safety Belt Use in 2003, “Belts are approximately 50% effective for preventing fatality in crashes in which motorists would otherwise die.” Seatbelt use by front seat occupants reduces the risk of fatality by 45% for passenger car occupants and by 60% for light-truck occupants. The United States Firefighter Fatality Retrospective Study 1990 – 2000 reports that about 27% of fire fighter deaths involving a motor vehicle included personnel being ejected from their vehicles, and that only 21% of personnel were wearing seatbelts at the time of the incident. Fire departments should review and revise, if appropriate, SOGs that would mandate the use of seatbelts in POVs. As stated in NFPA 1500 section 6.2.3: “fire departments shall enact specific rules and regulations pertaining to the use of privately-owned vehicles for emergency response.” The department’s SOGs should apply to all persons riding in all POVs in addition to emergency vehicles and state that all persons should be seated and secured in an approved riding position by a seatbelt anytime the vehicle is in motion. In addition to survivability in the event of a crash, a driver who is secured by a seatbelt will have a better chance at maintaining control of the vehicle in an emergency situation and may be able to avoid a crash. The department in this case had written SOGs addressing Vehicle Response Safety, including a statement that “private owned vehicles are not exempt from the state and local laws when responding,” and North Carolina has a mandatory seatbelt law. However, the department involved in this incident did not have a specific SOG noting the requirement for wearing seat belts when responding to fire department emergencies in POVs.

Recommendation #2 Fire departments should develop or revise, as appropriate, and enforce SOGs for the use of privately owned vehicles for emergency response, and provide training on the SOGs to fire fighters in all new-member orientation and driver training sessions 5-7

Discussion: The United States Fire Administration (USFA) United States Firefighter Fatality Retrospective Study 1990 – 2000 showed that since 1984, between 20 and 25 percent of all fire fighter fatalities are related to motor vehicle collisions, and one-quarter of those involved privately owned vehicles. It is recognized that most volunteer fire departments do not require personnel to stand by in the fire station, and in fact, many members are permitted by their fire chiefs to respond to the incident from somewhere other than the fire department in their POVs. The work situation in which an employer has the least control over motor vehicle operation is one where a worker drives a personal vehicle for work purposes. Similarly, when a fire fighter drives a personal vehicle to respond to the fire department or the emergency scene, the fire department has little or no control. To address this issue, the NFPA includes in NFPA 1500, section 6.2.3 “fire departments shall enact specific rules and regulations pertaining to the use of privately-owned vehicles for emergency response.” In addition to following the NFPA 1500 standard, it is necessary for fire departments to ensure that department SOGs and state and local speed limit laws for safe driving and operating a POV are followed while responding to a fire alarm. This will protect fire fighters as well as the general public. An example of a reference available for fire departments’ use related to POV response was developed by VFIS and can be accessed on the internet at the following URL: http://www.vfis.com/documents/PersonalVehicleResponseCommunique.pdfpdf iconexternal icon. (Link updated 1/30/2013)

Personal vehicles used for emergency response must be considered by fire departments when forming safety guidelines or policies. The department involved in this incident had a SOG for Vehicle Response Safety that required safe operation of fire department vehicles and privately owned vehicles during emergency response and non-emergency travel. The SOG required fire fighters to report in a safe manner as not to endanger themselves, others, or property, and emphasized that safe arrival is the first priority. This guideline also required that POV drivers observe state and local laws while responding. However, specific training and enforcement that apply to SOGs that exist or are developed must occur – preferably at new member orientation and at all regularly scheduled fire department driver training sessions 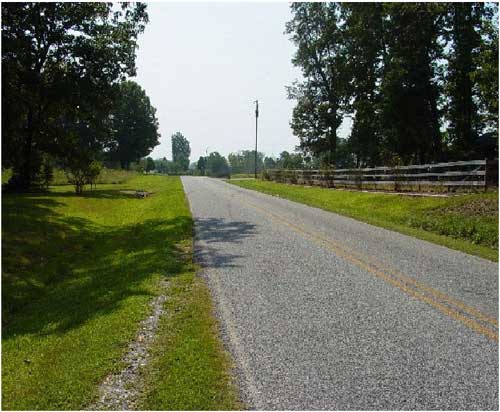 Photo 1. Illustrates the section of road the vehicle was traveling. 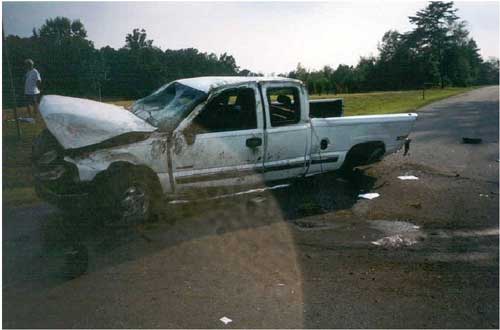 Photo 2. Illustrates damage to the driver’s side of the vehicle. 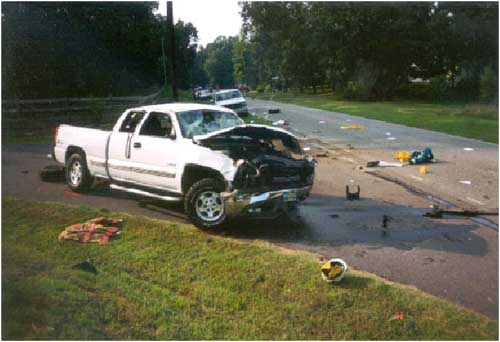 Photo 3. Illustrates damage to the passenger’s side of the vehicle.