On June 16, 2003, a 30-year-old male volunteer fire fighter was fatally injured after his privately owned vehicle (POV) hydroplaned and struck a billboard signpost. At 1830 hours, during a heavy rainstorm, the fire department was dispatched to a high-water emergency. The victim was responding in his POV to the Fire Department to pick up a fire apparatus when the incident occurred. The victim was heading east on a two-lane paved road when, according to the State Police report, he drove over a large pool of water which caused him to hydroplane and lose control. He traveled off the westbound shoulder of the road and struck a billboard signpost. A civilian motorist, whom the victim had passed about one mile before, came upon the crash scene and called 911. At approximately 1832 hours, the volunteer fire department was dispatched to this motor vehicle crash. Within approximately 6 minutes, the victim was extricated. He was given advanced life support and transported via ambulance to a regional trauma center approximately 30 miles away. He was pronounced dead at the hospital at 1940 hours.

NIOSH concludes that, in order to minimize the risk of similar occurrences, fire departments should: 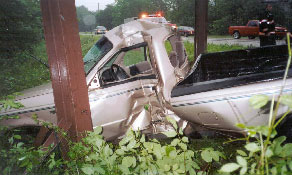 Vehicle at the scene of the incident

On June 16, 2003, a 30-year-old male volunteer fire fighter was fatally injured after his privately owned vehicle (POV) hydroplaned and struck a billboard signpost. On June 18, 2003, the U.S. Fire Administration (USFA) notified the National Institute for Occupational Safety and Health (NIOSH) of this incident. On June 26, 2003, a safety and occupational health specialist from the NIOSH Fire Fighter Fatality Investigation and Prevention Program, Division of Safety Research (DSR), investigated the incident. The NIOSH investigator interviewed the department Chief, the investigating State Trooper, and emergency personnel who were involved in extricating the victim. The investigator visited the site of the incident; took photographs of the POV and the site; and reviewed the department’s standard operating procedures (SOPs), the driver’s training records, witness statements, and the State Trooper’s report.

Department: This volunteer fire department has 27 active fire fighters in 1 station and serves a population of approximately 10,000 in an area of about 90 square miles.

Training: The victim had been a volunteer fire fighter for this department for approximately 2 years. He had 469 hours of training including Apparatus Operation, First Aid, Search & Rescue, and Live Fire Training. He was a certified Emergency Medical Technician (EMT). He had a total of 42 hours of unspecified driver’s training. The State requires a minimum of 150 hours of initial training to be a fire fighter plus a minimum of 20 hours refresher training each year.

Road and Weather Conditions: The incident occurred on a two-lane asphalt U.S. Highway with wide gravel shoulders and a posted speed limit of 55 mph. At the time of the incident, it was raining heavily.

On June 16, 2003, at 1830 hours, this volunteer fire department was dispatched for a high-water emergency involving trapped civilians. The victim responded to the call in his POV and was heading east on a two-lane paved road, toward the fire department, when, according to the State Police report, he drove over a large pool of water which caused him to hydroplane and lose control. His POV traveled off the shoulder of the opposite (westbound) lane and struck a ditch causing the vehicle to slide sideways into a billboard signpost (Photo). The door on the driver’s side sustained the major impact of the crash, trapping the victim inside. He was not wearing a seat belt. Note: Because there were no tire marks on the road, no speed estimate could be made by the investigating Police officer. A civilian motorist reported that the victim had passed her approximately one mile before the crash site. The motorist estimated that she was going about 40 mph at the time. This motorist was the first person to come upon the crash scene whereupon she called 911. Within 2 minutes, the first emergency vehicle arrived and shortly thereafter other emergency responders arrived and began to extricate the victim. Within approximately 6 minutes, the victim was extricated and placed in an ambulance. He was given advanced life support and transported to a local trauma center, approximately 30 miles away, where he was pronounced dead.

The preliminary cause of death was listed as massive head and chest trauma.

Recommendation #1: Fire departments should encourage drivers to drive at speeds appropriate for the conditions to prevent hydroplaning and loss of vehicle control.1-3

Discussion: A vehicle hydroplanes when the tires lose contact with a wet road and have little or no traction. During a heavy rain, water may be present on the roadway which increases the possibility of hydroplaning. How well traction will be maintained on a wet road depends on vehicle speed, amount of water present, and condition of the tires, specifically, if they are under inflated or have excessive tread wear. Hydroplaning can occur at speeds as low as 30 mph if enough water is present. Although the victim’s speed at the time of the hydroplaning and subsequent crash is unknown, shortly before the crash, he had passed a vehicle that was traveling at approximately 40 mph, thus he likely was going in excess of 40 mph.

To avoid hydroplaning, the driver must be aware of the environmental conditions that increase the potential for this event such as a heavy downpour or standing water on the road. Even the first 10 minutes of a light rain can be dangerous as the rain mixes with oil on the road surface creating a slippery condition. To avoid hydroplaning, drivers should slow down by easing their foot off the accelerator, avoid hard braking or sharp turns, drive in the tracks of the vehicle in front of them, and increase following distance. Drivers should check for worn tires and should maintain tire pressure at recommended levels, avoiding under inflation. Even with adequate tire tread, however, hydroplaning can occur when the water on the road surface is deeper than the depth of the tread. The tires on the victim’s truck were not excessively worn.

Recommendation #2: Fire departments should encourage personnel to wear seat belts when responding to emergencies in their POVs.4

Discussion: Although wearing a seatbelt probably may not have prevented this fatality due to the nature of the crash, in general, drivers who are properly secured by a seatbelt have a better chance of maintaining control of the vehicle in an emergency situation and of surviving a crash. Kentucky has a seat belt law. 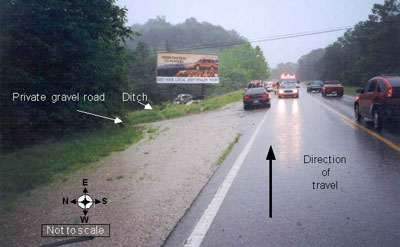 Photo. Eastbound view of the road the truck was traveling