On May 18, 2003, a 28-year-old male volunteer training/safety officer (the victim) was seriously injured when he fell from a moving pick-up truck. He had completed a three-day training course and at the time of the incident was being transported within the training grounds. The victim was riding on the lowered tailgate of a pick-up truck when he fell onto the road. He suffered severe head trauma and was treated at the scene by fellow fire fighter/emergency medical technicians (EMTs) and on-site emergency medical services. The victim was transported by medical helicopter to a local trauma center where he died from his injuries on May 24, 2003.

NIOSH investigators concluded that, to minimize the risk of similar occurrences, fire service organizations should:

Although it is unclear if a medical or physical condition contributed to this fatal incident, fire departments should consider implementing these safety and health recommendations based upon the physical demands and medical requirements of fire fighting. 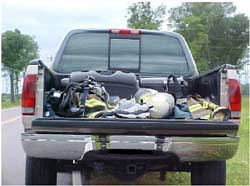 On May 24, 2003, a 28-year-old male volunteer fire fighter (the victim) died from injuries received six days earlier when he fell off of the tailgate of a moving pick-up truck. On June 2, 2003, the U.S. Fire Administration (USFA) notified the National Institute for Occupational Safety and Health (NIOSH) of this fatality. On June 24, 2003, a safety and occupational health specialist from the NIOSH Fire Fighter Fatality Investigation and Prevention Program investigated the incident. The investigator interviewed fire fighter/EMT trainees, one of whom was the driver of the pick-up truck, met with three officials of the Training Academy where the incident occurred, and spoke with the Chief of the Department and city officials. The police reports, ambulance call sheet, training records of the victim and death certificate were reviewed. Photos and measurements of the incident scene were taken.

Background
The volunteer fire department has 20 uniformed personnel and serves a population of approximately 2,100 in an area of about 15 square miles. The 28-year-old victim served as a sergeant with the sheriff’s department and had been a volunteer fire fighter for three years. He had served for the past two years as Training and Safety Officer for the fire department.

Training
Prior to his attendance at the training, the victim had successfully completed training in vehicle extrication and NFPA Fire Fighter levels I and II. There are no State minimum training requirements for fire fighters and the department has no specific training or physical capability testing requirements.

Equipment
The victim was riding on the lowered tailgate of a privately owned 1997 pick-up truck equipped with an automatic transmission (Photo 1).

Weather and Road Conditions
The weather was overcast and dry. The temperature was approximately 72°F with a wind speed of about 11 miles per hour and a humidity reading near 80%.

The newly finished asphalt roadway is approximately 25 feet wide with fog lines and a double yellow center line. The location where the incident took place is level and the pavement is smooth with no roadway obstructions (Photo 2).

The victim was participating in a three-day “Live Firefighting” training course which began on Friday, May 16 and ended on Sunday, May 18, 2003. The 22-hour course consisted of interactive practical training activities and live-fire simulations. The course was conducted at an official fire service training facility with most participants residing on campus for the duration of the training. The program began with a safety briefing at 1300 hours on Friday. The briefing was followed by ladder drills, maze trailer/self-contained breathing apparatus (SCBA) exercises, search and rescue sessions, sprinkler system review, and hose drills. Following the evening meal, training exercises on pressure gas flange fires, flammable liquid spill fires and vehicle fires were conducted. Saturday’s schedule was a group rotation that included living room, bedroom, kitchen, electrical, and storage fire scenarios. Witnesses report that at one point during the training exercises on Saturday, the victim complained of feeling ill and considered dropping out of the class and going home. However, it was reported that after discussing the content of remaining training evolutions with fellow fire fighters, he believed he had completed most of the strenuous exercises and decided to stay. On Sunday morning the victim told several fire fighters that he had chosen not to eat breakfast prior to the live-burn training evolution because he feared he would again become ill.

A large fire scenario was the final exercise of the 2 ½ day course. The class was scheduled to be conducted in the burn building that was located on the training campus approximately 1,600 feet north of the training center building and, because of the distance, many participants drove to the location.

The victim had traveled to the burn building in a privately owned pick-up truck with several of his fellow fire fighters. The training evolution began at approximately 0800 hours on Sunday morning and participants were dismissed at about 1100 hours. Following class completion, course participants were instructed to clean-up and restore apparatus, perform equipment maintenance, and prepare for the graduation ceremony which was scheduled to begin at 1130 hours in the training center.

The victim exited the burn building and walked to the parking area where he got into the bed of the pick-up truck. He sat facing backward, on the passenger side, with his legs hanging over the edge of the lowered tailgate. The driver proceeded out of the parking area and after coming to a stop at the end of the entrance road he made a left turn and proceeded south toward the training center building (Diagram 1). The pick-up truck had traveled approximately 140 feet from the stop sign when the victim fell off of the tailgate and landed on the roadway pavement. It is reported that he appeared to slide off of the tailgate feet first, landing in a face-up position, with the back of his head striking the pavement last. According to witnesses, neither speed nor the motion of the vehicle appeared to be a factor. No official estimate of speed was recorded on the police report.

Fire fighters at the scene immediately treated the victim for severe head trauma. An emergency medical services unit that was stationed on-site responded within minutes and provided advanced life support. A nearby medical helicopter was on-scene within five minutes and transported the victim to a local trauma center where he died from his injuries six days later on May 24, 2003.

The death certificate listed the cause of death as blunt force injury to the head.

Recommendation #1: Fire service organizations should ensure that all personnel being transported, when on-duty, be securely seated and restrained in approved vehicle passenger compartments. 1-3

Discussion: NFPA 1500 6.3.1 states that “All persons riding in fire apparatus shall be seated and belted securely by seat belts in approved riding positions.” Even though the vehicle in which the victim was riding was not a fire apparatus, prudent safety operations dictate compliance with this requirement for all vehicles used in the course of fire service operations.

The National Committee on Uniform Traffic Laws and Ordinances (NCUTLO) has developed a Model Occupant Protection Law that states can adopt. The model law addresses riding in non-passenger areas of motor vehicles. Section five clearly addresses passengers in the cargo area of a pick-up truck by stating that no operator shall allow, and no passenger may ride, on or in any portion of a motor vehicle that is not a passenger seating position, including the cargo-carrying areas of a pick-up truck. Thirty states and the District of Columbia, including Tennessee, have addressed the hazard of riding in cargo areas by enacting various laws.

This investigation revealed no specific event or factor that caused the victim to fall from the truck. Many dynamics, including weight of the turnout gear and boots, or possibly weakness from an illness or lack of food that morning, may have contributed to the victim’s inability to remain securely seated on the tailgate of the pick-up truck. However, had he been seated and restrained in an approved vehicle passenger compartment, the incident would not have occurred.

Although it is unclear if a medical or physical condition contributed to this fatal incident, fire departments should consider implementing these safety and health recommendations based upon the physical demands and medical requirements of fire fighting.

Discussion: Guidance regarding the content and frequency of periodic medical evaluations and examinations for fire fighters can be found in NFPA 1582, Standard on Medical Requirements for Fire Fighters and Information for Fire Department Physicians. NFPA 1582 §6.1 states that, “Medical evaluations of candidates shall be conducted prior to training programs or participation in departmental emergency response activities.” Information on medical evaluations can also be found in the report of the International Association of Fire Fighters/International Association of Fire Chiefs (IAFF/IAFC) wellness/fitness initiative. NFPA 1500, Standard on Fire Department Occupational Safety and Health Program, addresses the economic issues raised by implementation of NFPA 1582 and may be reviewed for guidance.

Discussion: NFPA 1500, Standard on Fire Department Occupational Safety and Health Program, requires that fire department members who engage in emergency operations be annually evaluated and certified by the fire department as meeting the physical performance requirements.

It is unknown if the symptoms expressed by the victim the day before the incident were in any way related to a specific illness that is addressed in NFPA 1582, or due to lack of physical conditioning as outlined in NFPA 1500 and defined in 1583. However, the information found in these three standards, along with the IAFF/IAFC wellness/fitness initiative, provides guidance to assist fire departments in early recognition and timely resolution of medical or physical conditions that may affect the fire fighter’s personal safety and well-being. 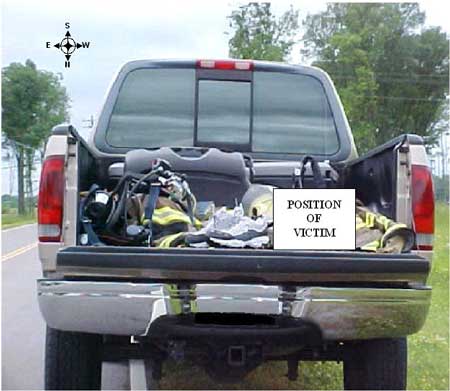 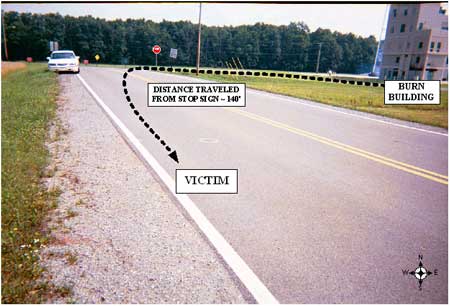