On February 23, 2003, law enforcement and fire department units were dispatched to a motor vehicle incident (MVI) at a State Highway/Township road intersection. Emergency personnel (fire fighters and fire police) were on the scene for approximately 30 minutes when a vehicle struck the victim while he was directing traffic in a heavy fog. On-scene personnel, trained as emergency medical technicians, came to the aid of the victim. He was then transported to the trauma center of a local hospital for further treatment. The victim was scheduled to be released from the hospital on March 01, 2003, but was not due to complications. The victim remained in the hospital until April 19, 2003, when he died as a result of complications from his injuries. 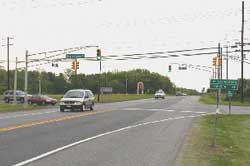 On February 23, 2003, a 63-year-old male volunteer Fire Police Captain (the victim) was struck by a motor vehicle while directing traffic. The victim died as a result of complications from his injuries on April 19, 2003. The National Institute for Occupational Safety and Health (NIOSH) was notified of this incident by the U.S. Fire Administration (USFA) on April 23, 2003. On May 14, 2003, two Safety and Occupational Health Specialists from the NIOSH Fire Fighter Fatality Investigation and Prevention Program investigated the incident. A meeting was conducted with the Director of Public Safety, the Fire Chief, officers and the local International Association of Fire Fighters (IAFF) union representatives from the fire department involved in this incident. Interviews were conducted with the career and volunteer officers, fire fighters, police officers and a civilian witness involved in this incident. The victim’s personal protective equipment (a high-visibility retroreflective vest) was examined by the NIOSH team. The incident site was visited by the NIOSH investigators where measurements and photographs of the scene were taken. The NIOSH investigators reviewed copies of the dispatch run sheet, dispatch radio transcriptions, fire department standard operating guidelines (SOGs) for fire police operations, the victim’s training records, witness statements, police report, incident scene photos, and death certificate.

Fire Department Involved in the Incident

The department involved in this incident is a public safety department that consists of one fire division with two fire stations with a total of 64 employees, of which 53 are cross-trained as Fire Fighter Level I & II. Additionally, 30 volunteer fire fighters and fire police are on call for this department. The department serves a population of approximately 27,000 in a geographic area of about 42 square miles.

The victim was a New Jersey State certified Fire Police Officer for 20 years. The victim had also received hazmat and first aid training.

Additional units were dispatched to multiple motor vehicle incidents (MVIs) prior to and during the time of this incident; however, only those units directly involved in the fatal event are discussed in the investigation section of this report.

The incident occurred in the middle of an intersection on a paved two-lane (east and westbound) State Highway measuring 45 feet 6 inches in width. There are paved shoulders on both sides of the highway, each measuring 10 feet 9 inches in width. The intersection has traffic lights and a posted speed limit of 50 mph. Witnesses stated that at the time of the incident the road was wet and heavy fog limited visibility to approximately 20 feet. Numerous roadway emergency flares were placed by police and emergency personnel down the center of the State Highway in both directions. Additional flares and traffic cones were placed in the intersection where the victim was directing traffic.

At 0833 hours, on February 23, 2003, law enforcement and fire department units were dispatched to a motor vehicle incident (MVI). While en route to the MVI, law enforcement Unit 2522 encountered a separate MVI at the intersection of a State Highway and Township Road. Additional fire department and law enforcement personnel were dispatched to this incident. Some of the units responding to the initial MVI, including the victim, were diverted to the MVI at the intersection of the State Highway and Township Road (Photo and Diagram). Law enforcement Unit 2522 blocked the southbound lane of the Township Road on the north side of the intersection. The officer radioed Central Dispatch and reported that they had a two vehicle MVI with no injuries. Additional law enforcement and fire department units began to arrive on the scene. Fire Police personnel, including the victim, arrived on the scene in their POVs. Rescue Unit 2518 parked in the westbound lane of the State Highway on the north side of the intersection. Note: All emergency vehicles on the scene had their emergency lights on. Flares were positioned approximately 220 feet in each direction (east and west) down the center line of the State Highway. Traffic cones and additional flares were placed in the middle of the intersection in the area where the victim and two other fire police officers were directing traffic (Diagram). Note: The victim was wearing a high-visibility retroreflective safety vest over a sweat shirt. The victim carried a flashlight equipped with a wand attachment utilized to direct traffic.

While waiting for the two vehicles involved in the initial MVI to be loaded onto a flatbed truck, a second MVI, with injuries, occurred in the westbound lane approaching the intersection. Law enforcement and fire department personnel proceeded toward the second MVI while the victim continued to direct traffic in the intersection.

At approximately 0911 hours, the victim flagged over a car (someone the victim knew) that was approaching the intersection in the eastbound lane. The driver of that car pulled off onto the shoulder, approximately 5 feet short of the intersection, where he parked and turned on his four-way flashers. A few seconds later a vehicle traveling in the eastbound lane approached the intersection. This driver later reported to police that he came upon a vehicle parked partially in the eastbound lane. He steered his vehicle around the parked vehicle and back into his lane. He then saw the victim and applied his brakes but was unable to avoid hitting him. The victim, who was facing the oncoming vehicle, saw the vehicle approaching him. Note: The victim reported to law enforcement that he did not see the car until it was approximately 4-feet in front of him. He then panicked and attempted to jump over the car. He was struck by the car and thrown onto the hood, striking the windshield before rolling off and onto the roadway. Note: After the incident, the driver of the vehicle that had struck the victim reported to law enforcement that he had been traveling at approximately 45 mph when he entered the fog bank. He also stated that after he had entered the fog bank he could see what he believed to be red traffic reflectors to his left in the center of the roadway (these were the emergency flares placed in the roadway by police and fire personnel).

On-scene personnel trained as emergency medical technicians came to the aid of the victim who was then transported to the trauma center of a local hospital for further treatment. The emergency medical technician’s report listed the victim’s injuries which consisted of a fractured leg, elbow, shoulder, and possible cardiac injuries. The victim was scheduled to be released from the hospital on March 01, 2003, but was not released due to complications. The victim remained in the hospital until April 19, 2003, when he died as a result of complications from his injuries.

The death certificate listed the immediate cause of death as severe pneumonia as a consequence of complications due to a pedestrian motor vehicle accident.

Recommendation #1: Fire departments should ensure that the placement of various types of warning devices (portable signs, orange traffic cones, flares and/or portable changeable message signs) informs drivers of what to expect when approaching an incident scene.1-4

Discussion: Part 6 of the November 2003 edition of the Manual on Uniform Traffic Control Devices (MUTCD) includes Chapter 6I – Control of traffic through traffic incident management areas. Chapter 6I defines a traffic incident management area as “an area of highway where temporary traffic controls are imposed by authorized officials in response to a road user incident, natural disaster, or special event. It extends from the first warning sign or emergency warning lights on a vehicle to the last temporary traffic control device or to a point where vehicles return to the original lane alignment and are clear of the traffic incident.”

Portable signs can be transported on an emergency vehicle to the incident scene where they can be placed in a location that allows maximum visibility to oncoming traffic. The manual on uniform traffic control devices (MUTCD) states “where special emphasis is needed, signs may be placed on both the left and right sides of the roadway. Signs mounted on portable supports may be placed within the roadway itself. Signs may also be mounted on or above barricades.”

Flares and orange traffic cones may be used individually or together to provide advance warning. To enhance the visibility of the orange traffic cones, flares may be placed next to them, where the glow from the burning flare would reflect off of and illuminate the cone.

Portable changeable message signs can be used as temporary traffic control devices. The flexibility to display various messages allows the signs to be used in a wide variety of applications (e.g., at a crash or for emergency incident management). The primary purpose of portable changeable message signs is to advise the road user of unexpected situations. Some typical applications may include: where the speed of vehicular traffic is expected to drop substantially; where crash or incident management is needed; or where changes in road user pattern occur.

Recommendation #2: Fire departments should consider positioning flaggers on or near the shoulder of the roadway upstream (approaching traffic) from the incident scene.1, 5 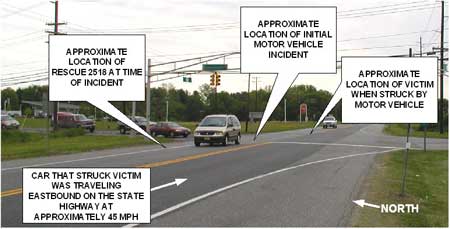 Photo. View of intersection where victim was directing traffic when struck by car in eastbound lane. 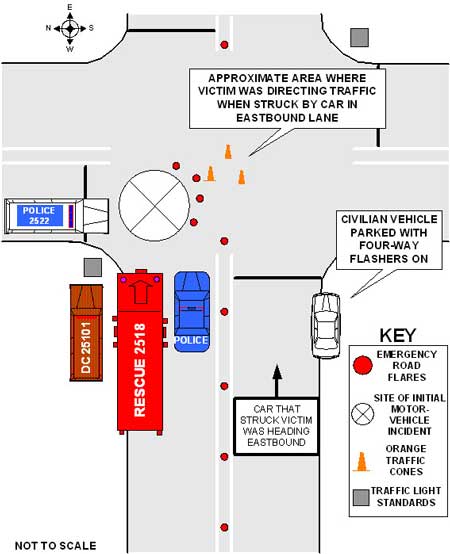