On April 3, 2003, a 56-year-old male volunteer fire fighter (the victim) was fatally injured after the pumper/tanker he was driving to a brush fire overturned. The vehicle was heading east on a two-lane county road and had just rounded a left-hand curve when it drifted off the right side of the pavement. The vehicle then re-entered the road and crossed to the opposite side where it went off the road and overturned, trapping the victim. The victim initially was conscious and able to call in the crash, but died approximately 6 minutes later, before the arrival of the rescue squad.

NIOSH investigators concluded that, in order to minimize the risk of similar occurrences, fire departments should 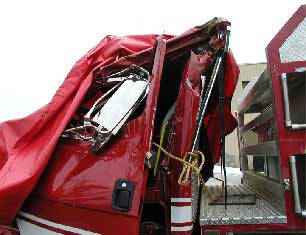 On April 3, 2003, a 56-year-old male volunteer fire fighter (the victim) was fatally injured after the pumper/tanker he was driving overturned while responding to a brush fire. On April 7, 2003, the U.S. Fire Administration (USFA) notified the National Institute for Occupational Safety and Health (NIOSH) of this incident. On April 30, 2003, a safety and occupational health specialist from the NIOSH Fire Fighter Fatality Investigation and Prevention Program investigated the incident. The NIOSH investigator met with the department Chief, a fire fighter who was first on the scene after the crash, and the State Trooper who investigated the incident. The investigator visited the site of the incident; took photographs of the tanker and the site; and reviewed the department’s standard operating procedures (SOPs), the driver’s training records, witness statements, the police report, and the medical examiner’s report.

This combination fire department (Fire Chief is a paid position) has 33 active volunteer fire fighters within 2 stations and serves a population of approximately 15,500 in an area of about 94 square miles.

Training: The victim had been a volunteer fire fighter for approximately 33 years and a driver for over 30 years. He had completed the 36-hour basic fire fighter’s course required by the State, and since 1994, had taken a minimum of 12 hours training per year as required by the State. For driver/operators, the department requires that they drive at least 1 year and demonstrate skills in using the pumps before they are allowed to respond to calls without an officer on board. The victim had certifications in Apparatus/Engine Operator, HazMat, and Wildland Fire Fighter I-IV, and additional training in Apparatus Operation among other topics. The victim had been trained in the operation of the vehicle involved in the incident by the factory representative; he had driven it on over 100 emergency calls.

Road and Weather Conditions: The incident occurred on a two-lane asphalt road with a posted speed limit of 55 mph. The road is approximately 18 ½ -feet wide and has no shoulders. On the east side of the road is a grassy, gently sloping field (Photo 1). The west side of the road is essentially the front yard of a residence with a ditch (Photos 1 & 2). The weather was clear and 68 degrees; the road was dry.

Equipment: The 2002 pumper/tanker involved in the incident was approximately 30 feet 9 inches long, 10 feet 4 inches high and 8 feet 4 inches wide. The 1,000-gallon water tank was T-shaped, had containment-type baffles, and was full. The Gross Vehicle Weight Ratinga (GVWR) for the truck was 38,000 lbs. The weight of the truck with equipment and 1000 gallons of water (full) was approximately 32,630 pounds.

a The chassis manufacturer’s specified maximum load-carrying capacity of a vehicle having two axle systems (a multiaxle axle installation is one system).1

On April 3, 2003, at 1242 hours, this combination fire department was dispatched to a brush fire. Two apparatus were dispatched: the pumper/tanker involved in the fatal incident and a brush truck. The pumper/tanker (driver only) was heading east on a two-lane road with a posted speed limit of 55 mph. According to the State Highway Patrol report, the estimated speed of the vehicle was 40 mph. The incident occurred after the vehicle had traveled about 7 ½ miles and was within a half mile of the brush fire.

According to the State Highway Patrol report, the driver lost control of the vehicle as he rounded a left-hand curve and went off the right side of the pavement. The tanker then re-entered the road and crossed over to the opposite (west-bound) lane where it went off the road and struck a telephone junction box, a mailbox, and a ditch in the front yard of a residence (Photo 2). The truck overturned once coming to rest on the passenger side. Note: the victim was not wearing a seat belt. At approximately 1254 hours, the victim reported the crash. The occupants of the brush truck, which was behind the tanker, saw the tanker coming to rest on the passenger side. One of the fire fighters in the brush truck approached the cab to check the victim who said he was having difficulty breathing. The victim died at approximately 1300 hours, prior to the arrival of the ambulances and rescue squad.

The death certificate listed the cause of death as compressive asphyxia.

Recommendation #1: Fire departments should provide training to driver/operators as often as necessary to meet the requirements of NFPA 1451, and incorporate specifics on rollover prevention in standard operating procedures (SOPs).2-5

Discussion: NFPA 1451 § 5.3 states that fire department personnel must be trained in and exercise applicable principles of defensive driving techniques under both emergency and nonemergency conditions. SOPs for driving fire department vehicles during nonemergency travel and emergency response should include, but not be limited to, the principles of skid avoidance and the effects of liquid surge, load factors, general steering reactions and speed on vehicle control. Common causes for loss of control and skidding are driving too fast for road conditions, oversteering, failing to properly appreciate weight shifts of heavy emergency apparatus, overbraking, driver distraction, and failing to anticipate obstacles.

Driver training should incorporate vehicle characteristics, capabilities and limitations. Tankers, for example, tend to be heavier and to have a higher center of gravity than other fire vehicles. Both of these factors affect the driver’s ability to control a tanker. Based on simple physics and inertia, a top heavy vehicle like a tanker is inclined to tip over if driven through a curve at an unsafe speed or if the driver suddenly turns the wheel in an effort to bring the wheels back onto the road. VFIS (formerly Voluntary Firemen’s Insurance Services) of York, Pennsylvania lists some vehicle rollover prevention points to increase drivers’ ability to maintain control of a vehicle should they run off the road. These include slowing the vehicle gradually by taking the foot off the accelerator, feathering the brakes, and downshifting. Only after the vehicle has been brought down to a safe speedb, should it be gently steered back onto the road. The steering wheel should be turned so that the front wheels face the direction of the skid.

Frequency of training. Driver training should be documented and given in accordance with NFPA 1451, Standard for a Fire Service Vehicle Operations Training Program and NFPA 1002, Fire Apparatus Driver/Operator Professional Qualifications. These standards state that departments should establish and maintain a driver training education program and each member should be provided driver training not less than twice a year. During this training, each driver should operate the vehicle and perform tasks that the driver/operator is expected to encounter during normal operations to ensure the vehicle is safely operated in compliance with all applicable State and local laws. The department had last provided training about 3 years prior to the incident.

bAccording to USFA/FEMA (p.113) the appropriate speed at which to remount the paved surface is estimated to be 20 mph or less.

Recommendation #2: Fire departments should develop and enforce standard operating procedures (SOPs) on the mandatory use of seat belts in all emergency vehicles.5-8

Discussion: Fire departments should develop and enforce SOPs on the use of seat belts. The SOPs should apply to all persons riding in all emergency vehicles and should state that all persons must be seated and secured in an approved riding position whenever the vehicle is in motion. An operator who is properly secured by a seatbelt has a better chance of maintaining control of the vehicle in an emergency situation and of surviving a crash. The department in this incident has by-laws that address mandatory seat belt use and an SOP that covers driving. The SOP states that drivers must follow the Ohio Revised Code concerning motor vehicle safety. Ohio, and the city in which the incident occurred, have mandatory seat belt laws. 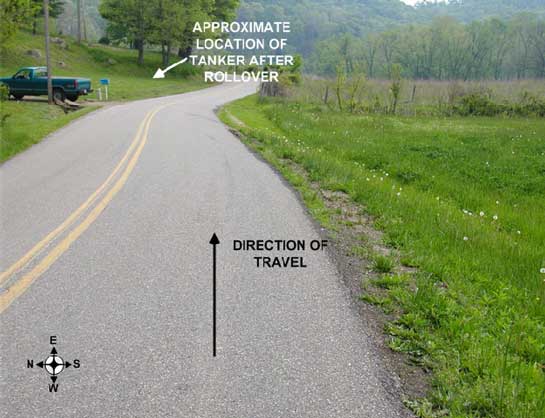 Photo 1. Eastbound view of the road the tanker was traveling. 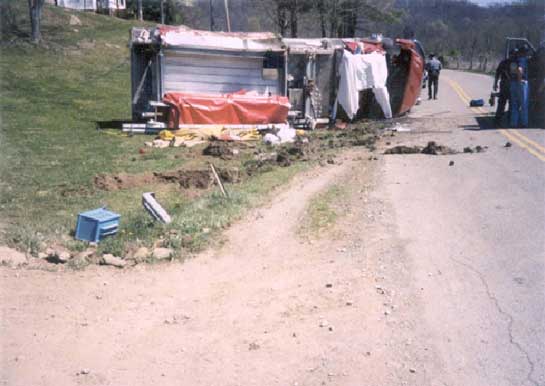