On September 30, 2002, a 50-year-old male career Captain (the victim) died when a parapet wall collapsed on him at an auto body shop fire. Arriving units advised responding crews that the structure was “fully involved.” Crews began an exterior attack as the fire had self-vented through the side windows and the roof. Crews were operating in a defensive posture when the parapet wall and overhanging facade fell forward, landing on top of the victim. A Lieutenant and an emergency medical technician were also injured by the collapsing parapet wall. Rescuers removed the victim from the debris and found that he did not have a pulse and was not breathing. The victim was transported to an area hospital where he was later pronounced dead.

On September 30, 2002, a 50-year-old male career Captain (the victim) died when a parapet wall collapsed at an auto body shop fire. On October 02, 2002, the U.S. Fire Administration notified the National Institute for Occupational Safety and Health (NIOSH) of this incident. On October 28, 2002, a Safety and Occupational Health Specialist and the NIOSH Fire Fighter Fatality Investigation and Prevention Program Team Leader investigated this incident. Meetings were conducted with the Chief and Assistant Chief of the fire department, the local International Association of Fire Fighters’ representative, the State Fire Marshal and a compliance officer from the State of Indiana Department of Labor. Interviews were conducted with officers and fire fighters who were at the incident scene. The investigators reviewed the victim’s training records, autopsy report, and death certificate. NIOSH investigators also reviewed the department’s standard operating procedures (SOPs), the fire department incident report, a transcription of the dispatch tapes, and the State Fire Marshal’s report. The incident site was visited and photographed. On March 29, 2003, a phone interview was conducted with the City Building Commissioner.

The career department involved in this incident is comprised of 145 uniformed fire fighters serving a population of approximately 62,400 in a geographical area of about 36 square miles

The victim was a Captain who had approximately 24 years of experience with the department. The victim was a certified NFPA Fire Fighter Level I & II, Driver/Operator, Hazmat and Fire/Arson Investigator.

Structure
This was a structure of Type III ordinary construction with approximately 1800 square feet of floor space. The original building had exterior walls constructed of masonry concrete blocks with an extension of a steel building to the C-side (Photo 1). A steeply pitched overhanging facade above the door and windows, constructed of 2 x 4s and plywood, and covered with asphalt shingles, was later added to the parapet wall on the A-side of the building. The weight of this overhanging facade caused cracks in the exterior masonry wall. Reinforcing rods were fashioned into support rods that connected the parapet wall to the roof in an attempt to prevent further damage to the exterior walls (Photos 1 and 2). This building was grandfathered under current city building codes and therefore no code violations were issued by the office of the City Building Commissioner.

On September 30, 2002, at 0204 hours, Engine 3, Engine 7, Engine 11, Ladder 5, Air Truck1, Medic 7, and Battalion Chief 2 were dispatched to a garage fire. All units were en route at 0205 hours. At 0207 hours, Engine 7 arrived on the scene with the Captain (initial officer in charge) advising responding units and Central Dispatch that the structure was “a strand steel building” (Photo 1) and that it was “fully involved.” Medic 7 arrived on the scene after Engine 7. The crew from Engine 7 pulled a 1 ¾-inch preconnect and stretched it to the fenced area adjacent to the building (Diagram). Two of the windows on the B-side had self-vented and had heavy fire showing. Flames were emitting from underneath the eaves with heavy smoke above the building. The gate to the motor vehicle storage area was forced open and the line was advanced to allow the crews to attack the fire from the B-side of the building.

At 0208 hours, Engine 11 arrived on the scene and advised responding crews that the incident site was a “garage and body shop.” The Captain from Engine 7 informed the victim and the Lieutenant from Engine 3 that the operation was going to be defensive. The victim began knocking out the windows with an ax on the A-side of the building while the fire fighter from Engine 11 forced open the front door.

At 0210 hours, Battalion Chief 2 arrived on the scene and drove around the structure to complete the size-up. The Battalion Chief parked his vehicle across the street on the A-side of the building and assumed incident command (IC).

At 0211 hours, Engine 3, Ladder 5, and Air Truck 1 arrived on the scene. Engine 3 proceeded past the scene and connected to the hydrant. The Captain from Engine 7 ordered the victim and another fire fighter to pull another preconnect from Engine 7 and begin an attack on the A-side of the building (Diagram).

The victim and one of his fire fighters from Engine 7 had donned their SCBA face masks and were at the door with a 1 ¾-inch preconnect. The fire fighter advanced the line through the front door and down the hallway approximately 5 feet while the victim stayed at the door. The IC announced on the radio that the operation was going to be defensive and for all fire fighters to get out of the building.

At approximately 0212 hours, the fire fighter, who was on the line inside the building, exited and began pulling the line toward the B-side of the building. The Lieutenant from Engine 3 turned off the victim’s air bottle while they were standing in front of the building. As the Lieutenant turned to walk toward Engine 7, the roof, parapet wall, and overhanging facade collapsed. The parapet wall and overhanging facade fell forward, landing on top of the victim (Diagram and Photo 3). Note: Fire fighters told NIOSH investigators that they had little to no warning of the impending collapse. The Lieutenant from Engine 3 was knocked to the ground and suffered a broken leg and an EMT suffered a fractured wrist. The injured personnel were pulled away from the debris and received medical attention before being transported to an area hospital. Fire fighters on the scene began removing debris in an attempt to extricate the victim. The IC, who had been knocked to the ground and received minor injuries, ordered a fire fighter to call Central Dispatch for additional resources. Rescuers removed the victim from the debris and found that he did not have a pulse and was not breathing. The rescuers began cardiopulmonary resuscitation (CPR). At 0230 hours, the victim was transported to an area hospital where he was later pronounced dead at 0300 hours.

The autopsy report lists the cause of death as extensive blunt force trauma.

Discussion: SOPs are a set of organizational directives that establish a standard course of action on the fireground to increase the effectiveness of the fire fighting team. SOPs are characterized as being written and official. They are applied to all situations, enforced, and integrated into the management model. They generally include such areas as: basic command functions; communications and dispatching; fireground safety; guidelines that establish and describe tactical priorities and related support functions; method of initial resource deployment; andan outline of responsibilities and functions of various companies and units.

Unwritten directives are difficult to learn, remember, and apply. One approach to establishing SOPs is to have officers and fire fighters decide how all operations will be conducted and then commit those decisions to writing. At the time of the incident, the department did not have written SOPs regarding fireground operations.

Recommendation #2: Fire departments should ensure that officers and fire fighters at a structure fire continuously analyze the building to identify collapse potential. 4-7

Load imposition and load resistance can be visualized by identifying any structural element that is carrying something it should not, and whether the key elements are being attacked by fire (e.g., HVAC units, signs, heavy stock, overhangs, open-spans, unsupported loads, or a reinforced facade).

Examples of weak links include trusses (floors/roofs), structural connections, and any overloading when buildings are being used for occupancies for which they were never intended.

A collapse sequence should be visualized using available information. This will assist in assessing if walls will fall inward or outward, if the building can withstand a partial collapse, or if a failure of the roof would lead to a catastrophic collapse.

Recommendation #3: Fire departments should ensure that a collapse zone is established and clearly identified at structure fires involving buildings susceptible to collapse. 4, 5, 7

Discussion: If structural integrity is questionable, a collapse zone needs to be established. Fire fighters and officers must recognize and know the dangers of operating underneath or near a parapet wall. As a free-standing masonry wall, a parapet has little if any lateral stability and presents an extreme collapse hazard. Collapse may be caused by the failure of the roof structure pulling the wall in or pushing it out. Also, an external load such as a sign or electric service reacting on a wall weakened by fire conditions may cause the collapse of a parapet. The collapse zone should be equal to the height of the building plus an additional allowance for debris scatter and at a minimum should be equal to 1½-times the height of the building. For example, if the wall were 20 feet high, the collapse zone would be established at least 30 feet away from the wall.

Recommendation #4: Fire departments should ensure that pre-emergency planning is completed for mercantile and business occupancies. 8, 9

Recommendation #5: Fire departments should ensure that a separate Incident Safety Officer (ISO), independent from the Incident Commander, is appointed. 7, 10, 11

Discussion: The incident commander (IC) should appoint an incident safety officer (ISO) at all significant emergency incidents. NFPA 1521, Section 6, states that “the incident safety officer shall be integrated with the incident management system as a command staff member, as specified in NFPA 1561, Standard on Emergency Services Incident Management System. The ISO would inform the IC as existing or potential hazards are identified and addressed. The ISO shall have the authority to alter, suspend, or terminate those activities judged to be unsafe or to involve an imminent hazard.

An Incident Safety Officer (ISO), independent from the Incident Commander (IC), was not appointed at this incident.

Photo 1. View of the A- and B-Sides of the building prior to the incident 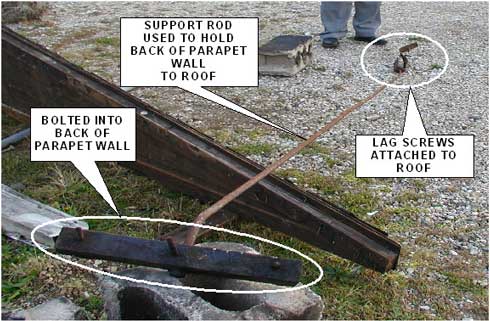 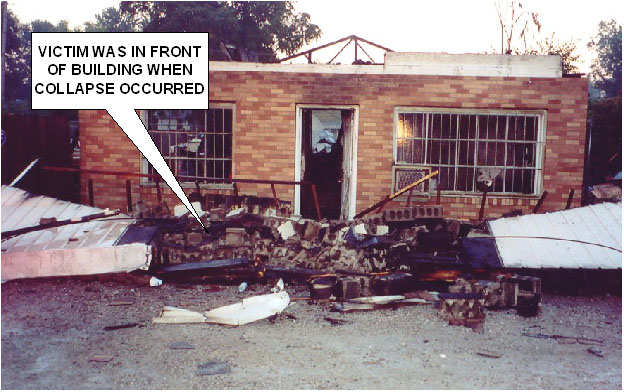 Photo 3. A-side of building after collapse