On June 13, 2002, an 18-year-old female volunteer Emergency Medical Technician (the victim) was fatally injured after being involved in a single vehicle crash while driving the fire department medic unit to a confirmed structure fire. The victim was en route to the fire on a rural State highway when the medic vehicle she was driving veered across the road, overturned, and entered a ditch. After entering the ditch, the medic unit overturned again, struck a barn, and then overturned two more times in a field. The victim was ejected and found unresponsive. She was transported to a local hospital where she was later pronounced dead.

Although there is no direct evidence that these contributed to this fatal incident, the following recommendations are being provided as a reminder of good safety practice.

On June 13, 2002, an 18-year-old female volunteer Emergency Medical Technician (the victim) was fatally injured after being involved in a single-vehicle crash while driving the fire department medic unit to a confirmed structure fire. On June 17, 2002, the U.S. Fire Administration (USFA) notified the National Institute for Occupational Safety and Health (NIOSH) of this fatality. On October 24, 2002, two safety and occupational health specialists from the NIOSH Fire Fighter Fatality Investigation and Prevention Program investigated the incident. The NIOSH team met with a representative of the North Carolina Department of Insurance, Office of the State Fire Marshal, the Chief of the department, and other department members who were on the scene of the incident. They visited the site of the crash where they took photographs and measurements. The State police report, emergency call sheets, training records, witness statements, Standard Operating Procedures, and medical examiner’s report were reviewed.

Background
The volunteer fire department has 35 uniformed personnel, which includes 27 fire fighters and 8 medics. It serves a population of about 5,000 in an area of about 25 square miles. The 18-year-old victim had been a volunteer medic with the department for 2 years.

Training
The victim was a State certified Emergency Medical Technician (EMT). In conjunction with EMT training she successfully completed search and rescue training and a State-sponsored emergency vehicle driver course that was comprised of 9 hours of classroom and 3 hours of hands-on training. During her second year of service, she attended emergency vehicle response training that was conducted by the department.

Equipment
The medic unit (Medic 15) was a 1993 sport utility vehicle that had been retrofitted to store and transport emergency response supplies. The storage area was separated from the driver compartment by a ¾-inch piece of plywood that was bolted to the floor behind the front seats and extended above the seats stopping several inches from the interior roof. Backboards, medical supplies, and emergency medical kits were stored in this area. Most items, with the exception of the backboards, had been secured by strapping or were bolted to the floor. Maintenance of the medic vehicle included a daily visual inspection, checking fuel and fluid levels, and continual replenishment of medical supplies. Mechanical problems were reported by the drivers and resolved before the unit was returned to service. The two front tires on Medic 15 were replaced approximately 2 months before the incident.

Weather/Road Conditions
The incident occurred on a rural, asphalt road with a dirt and grass shoulder. The road is approximately 17 feet wide, and the distance is about 6 feet 7 inches from the north-side edge of the asphalt to where it drops approximately 3 feet into a ditch. The road is level with a slight curve to the right approximately ¼ of a mile west of the crash location. The posted speed limit is 55 miles per hour. Landscape in the area where the incident occurred is primarily rural with open farmland. It was dark at the time of the incident. Weather conditions were calm and dry and did not appear to be a factor.

On June 13, 2002, at 2108 hours, the volunteer fire department was dispatched to a confirmed structure fire. Engine 1531 with an officer and one fire fighter and Engine 1532 with four fire fighters responded. It is department practice for the medic unit to respond to structure fires as backup for EMS, therefore Medic 15 was dispatched with one Emergency Medical Technician/driver (the Victim) responding. Medic 15 is used to transport medical equipment and supplies to emergency scenes. It is equipped with three radios: fire, sheriff and rescue which are all mounted on the floor.

At 2128 hours, the victim radioed from the medic unit that she was en route. At approximately the same time an off-duty EMT was heard calling to the victim over the radio. The victim did not respond. Engine 1533 with an officer and four fire fighters radioed at 2129 hours that they were en route to the scene. At 2130 hours Engine 1533 came upon the medic unit in a field to the north of the highway and called for rescue. At the same time, EMS was dispatched to the crash scene following a 911 call made by a nearby resident

The medic unit was sitting upright in a field to the north side of the road. The police report indicated that the skid marks measured approximately 183 feet from where the unit first veered off the highway to the point where it entered the ditch. (Photo 1). According to the police report, the medic unit was moving in excess of the speed limit when it traveled left of center of the road, went out of control, then overturned and entered a ditch. After impact with the ditch, it overturned again and struck a barn. The medic vehicle then overturned two more times in a field before coming to rest near an irrigation ditch (Aerial Diagram). It is estimated that the victim was ejected and thrown approximately 120 feet when the vehicle hit the barn (Photo 2). According to the police report, she was not wearing a seat belt at the time of the incident.

Firefighters from Engine 1533 immediately began searching for the victim. After approximately two minutes, she was found unresponsive, lying about 75 feet from where the medic vehicle came to a final rest. Emergency medical procedures were begun by the fire fighters and continued by ambulance personnel. The victim was transported to a regional hospital where she was later pronounced dead.

The Medical Examiner’s report listed the cause of death as blunt-force trauma to the head and neck.

The department SOP’s should be expanded to incorporate specific references to driver/operator safety procedures. The SOP’s should also include guidance on driving department and personal vehicles during emergency response, as well as operating fire apparatus during non-emergency travel. The SOP’s should include, but not be limited to, the principles of skid avoidance, load factors, general steering reactions and speed. In the state of North Carolina where the incident occurred, emergency vehicles are permitted to exceed maximum speed limits “when operated with due regard for safety.” According to the police report, the medic unit was estimated to be traveling 75 miles per hour, which is 20 miles per hour above the posted speed limit.

Recommendation #2: Fire departments should ensure that all persons responding in emergency apparatus are wearing and belted securely by seat belts. 6, 7

Discussion: Fire fighters and emergency responders make many life-and-death decisions during a tour of duty, and one of the most important for their own safety is securing their seat belt after climbing aboard a responding emergency apparatus. The fire department involved in this incident had no written policy requiring the use of seat belts. However, the SOP’s included a provision for the driver to obey all State traffic laws. The use of seat belts is required by the State of North Carolina in the operation of motor vehicles. The victim was not wearing a seat belt and was ejected from the medic unit.

Discussion: A fire department driver training program should be in accordance with NFPA 1451, Standard for a Fire Service Vehicle Operations Training Program and NFPA 1002, Fire Apparatus Driver/Operator Professional Qualifications, and all applicable State and local motor vehicle laws and regulations. NFPA 1451 § 5.3 states that fire department personnel must be trained in, and exercise, applicable principles of defensive driving techniques under both emergency and non-emergency conditions. The standards also state that departments should establish and maintain a driver training education program and each member should be provided driver training no fewer than two times per year. During this instruction, each trainee should operate the vehicle and perform tasks that the driver/operator is expected to encounter during normal operations. Driving tasks should be assigned to trainees in an incremental manner beginning with limited responsibilities and ending with unrestricted assignments. Intensive and time-sensitive driving tasks should be gradually introduced only after apparatus-specific skills are mastered.

Although there is no direct evidence that these contributed to this fatal incident, recommendations #4 and #5 are being provided as a reminder of good safety practice.

Recommendation #4: Fire departments should ensure that all equipment within the fire apparatus driver and crew compartments is properly mounted or stowed. 10, 11

Discussion: One of the most significant hazards to fire fighters and rescue personnel involved in vehicle crashes is the equipment carried inside the apparatus. NFPA 1901 states that “all equipment to be used during an emergency response shall be securely fastened.” Items such as medical supplies, oxygen tanks, and backboards can become projectiles in the event of vehicle impact. It is very important that these objects be secured by mechanical means or stored in enclosed compartments.

Recommendation #5: Fire departments should take into consideration the movement required by the driver to reach switches and electronic devices when developing driving compartment specifications and/or retrofitting existing apparatus. 11, 12

Discussion: The cab design is a very important factor for the safe operation of a fire or rescue apparatus. The apparatus in this incident had three different radio’s mounted on the floor. NFPA 1901 states that “controls and switches that are expected to be operated by the driver while the apparatus is in motion shall be within convenient reach for the driver.” The standard defines convenient reach as “the ability of the operator to manipulate the control from a driving/riding position without excessive movement away from the seat back or without excessive loss of eye contact with the roadway.” However, the standard does not specifically address placement of the radio. 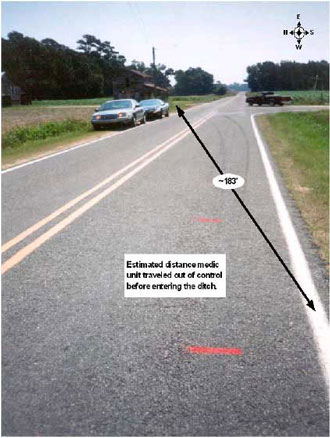 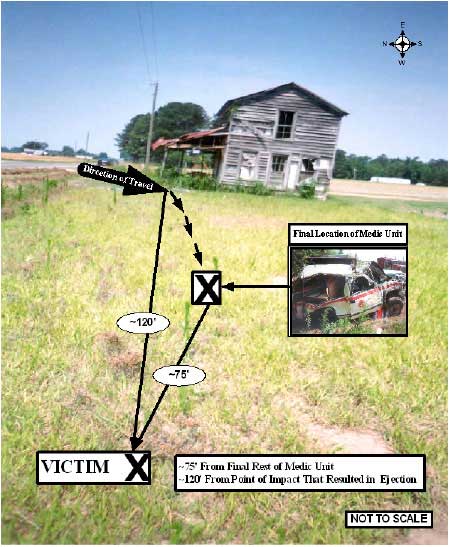