On September 23, 2002, a 32-year-old female career fire fighter was fatally injured when the tanker truck she was driving overturned while returning to the fire station. The tanker truck drifted off the roadway onto the shoulder, causing the driver to lose control of the truck after she overcorrected to bring the truck back onto the roadway. The truck skidded across the roadway, entered a ditch, and overturned. The victim was entrapped in the truck and was pronounced dead on the scene. After an investigation of the scene was performed by the State highway patrol, the victim was extricated by emergency medical service personnel and transported to a local hospital.

On September 23, 2002, a 32-year-old female career fire fighter was fatally injured when the tanker truck she was driving overturned while returning to the fire station. On September 24, 2002, the U.S. Fire Administration (USFA) notified the National Institute for Occupational Safety and Health (NIOSH) of this incident. On October 23, 2002, two safety and occupational health specialists from the NIOSH Fire Fighter Fatality Investigation and Prevention Program investigated the incident. The NIOSH team interviewed the Chief and the members of the department, and met with a representative of the North Carolina Department of Insurance, Office of the State Fire Marshal. They also took photographs of the crash site and of the tanker truck, and they reviewed standard operating guidelines (SOGs), fire department photographs, the State Highway Patrol report, training records of the victim, and the death certificate.

The combination department is comprised of 9 career and 44 volunteer fire fighters, has 3 fire stations, and serves a population of approximately 27,000 in an area of about 72 square miles.

Training. The department requires all career fire fighters to meet the State fire fighter requirements and at a minimum to be National Fire Protection Association (NFPA) Fire Fighter I and II (480 hours) certified. The State of North Carolina requires emergency vehicle operators that have a career status to hold a Class B driver’s license, which the victim received in 1998, and to renew the license every 5 years. Further, on an as-needed basis, the department requires that drivers practice driving particular vehicles with an officer or other departmental personnel present. The victim had been a driver for the department for 21 days. She had received the required department training for driving this vehicle 18 days before the incident, and she had driven it on previous emergency calls. The victim had been a career and a volunteer fire fighter for 5 years with other departments, during which time she was a qualified driver. She was certified as NFPA Fire Fighter I and II, an Apparatus/Engine Operator, and emergency medical technician.

Equipment. The 1975 tanker truck involved in the incident was approximately 27 feet long, 8 feet wide, and 9 feet high, with a gross vehicle weighta rating of 35,000 pounds. It had a rectangular-shaped, 1250-gallon (3-baffled) water tank. According to the North Carolina Department of Insurance, Office of the State Fire Marshal, the tanker was completely filled at the time of the incident and weighed approximately 33,000 pounds. The interior of the 1250-gallon tank was refinished by a contractor in 1990, at which time the baffles were checked and found to be in good condition. The tanker truck had a manual transmission and an air braking system. The tanker truck had a seat belt safety restraint system that consisted of a lap belt that was available on both the driver and passenger sides. The tanker truck had a current inspection sticker as required by the State. The department also performs and documents daily vehicle inspections.

On September 23, 2002, a career fire fighter (the victim) was driving a tanker truck back to the fire station. The truck had been taken to another department a couple of hours before the incident to have the discharge valve repaired. The distance between the two fire stations is approximately 5 miles.

At approximately 1100 hours, the truck was traveling eastbound on a two-lane county road with a posted speed limit of 55 mph (Photo 1). According to the State Highway Patrol report, at approximately 1105 hours, the tanker was traveling approximately 50 mph when, for an unknown reason, the right-side tires drifted off the road onto the east (right) shoulder. The tanker traveled approximately 80 feet before the victim lost control of the truck as she attempted to bring the tanker back onto the road. The victim overcorrected as she steered the tanker back onto the road, and it skidded approximately 100 feet across the west (left) side of the road, off the shoulder and into a ditch where it overturned about one revolution before coming to rest upside down partially off the west side of the road (Diagram and Photo 2).

At approximately 1107 hours Central Dispatch dispatched a squad, an engine, and several ambulances. Fire fighters and ambulance crews arrived on the scene at approximately 1110 hours, and they found the tanker lying upside down with the victim pinned under the steering wheel. Because of her position in the cab, investigators believe the victim was not wearing a seat belt. An inspection of the driver seat belt after the incident indicated that the driver seat belt was fully intact and in the original unlatched position. Although fire fighters and ambulance crews were unable to remove the victim, they were able to reach her to check for vital signs. Discovering the victim had no vital signs, they called the local hospital and the medical examiner.

The death certificate listed the cause of death as fractured neck due to motor-vehicle incident.

Recommendation #1: Fire departments should ensure that operators of emergency vehicles understand the vehicle characteristics, capabilities, and limitations to avoid losing control and skidding. 1–5

Discussion: The ability to safely control and maneuver fire apparatus is one of the most critical aspects of an operator’s responsibilities. While driving, the operator should be in control of the vehicle and take into consideration the vehicle characteristics, capabilities and limitations (e.g., speed, road conditions, auxiliary braking systems and weight transfer). Operating and controlling the vehicle at a speed from which the vehicle could be safely slowed or stopped could decrease the potential for a skid and loss of control. Based on simple physics and inertia, a top heavy vehicle like a tanker is inclined to tip over if the driver suddenly turns the wheel in effort to bring the wheels back onto the road. According to the Volunteer Firemen’s Insurance Services of York, Pennsylvania, only after the vehicle has been brought down to a safe speedb, should it be gently steered back onto the road.

The most common causes for skids are driving too fast for road conditions, oversteering, failing to properly appreciate weight shifts of heavy emergency vehicles/apparatus, overbraking, and failing to anticipate obstacles. Proficiency in skid control may be gained through practice at facilities having skid padsc. These are smooth surface driving areas that have water directed onto them to make skids likely. This exercise should be done at low speeds to avoid damaging the vehicle or injuring participants. If a skid pad is not available, it may be possible to use an open parking lot.

Operators must understand that if the vehicle is not equipped with an antilock braking system (ABS) and goes into a skid, the proper response is to release the brakes and allow the wheels to rotate freely while gradually letting up on the accelerator. The steering wheel should be turned so that the front wheels face in the direction of the skid. If using a standard transmission, the clutch should not be released until the vehicle is under control. Another key factor for skid prevention is proper maintenance of tire air pressure and adequate tread for tires. Operators need to be aware that while operating a tanker, the weight shifting of 1,250 gallons of baffled water, as in this incident, can have a serious effect on the ability of the operator to steer, brake, and maintain control of the vehicle.

Recommendation #2: Fire departments should enforce standard operating guidelines (SOGs) on the use of seat belts in all emergency vehicles. 6–8

Discussion: Fire departments should enforce SOGs on the use of seat belts. The SOGs should apply to all persons riding in all emergency vehicles and state that all persons should be seated and secured in an approved riding position anytime the vehicle is in motion. An operator who is properly secured by a seatbelt will have a better chance at maintaining control of the vehicle in an emergency situation and surviving a crash. The department did have written SOGs addressing that seat belts be worn at all times. The State of North Carolina has a mandatory seat belt law.

a The National Highway Traffic Safety Administration (US Department of Transportation) defines Gross Vehicle Weight Rating as the maximum rated capacity of a vehicle, including the weight of the base vehicle, all added equipment, driver and passengers, and all cargo loaded into or on the vehicle.1

b According to the USFA/FEMA (p.113) the appropriate speed at which to remount the paved surface is estimated to be 20 mph or less.

c A skid pad has a smooth surface, and water is floated across the top of it. 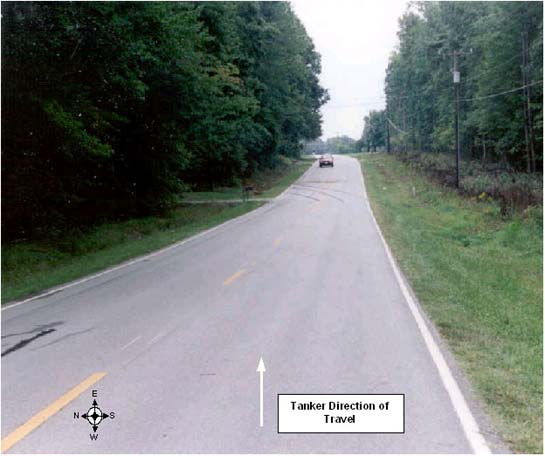 Photo 1. Eastbound view of the road the tanker truck was traveling. 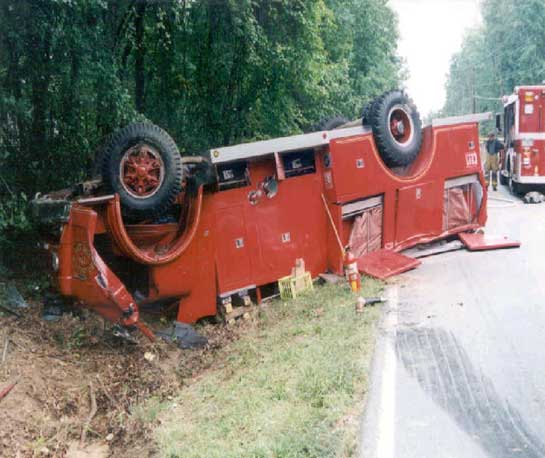