On September 5, 2002, a 17-year-old male volunteer fire fighter (the victim) was fatally injured after the tanker truck he was driving overturned while responding to a brush fire. The tanker was traveling south on a two-lane county road when it drifted off the right side of the road, causing the driver to lose control. The driver tried to correct the direction of travel of the tanker but was unable to recover. The tanker went down a slight embankment and overturned trapping the victim. The victim was extricated and then transported to a local hospital by ambulance where he was pronounced dead.

NIOSH investigators concluded that, in order to minimize the risk of similar occurrences, fire departments should 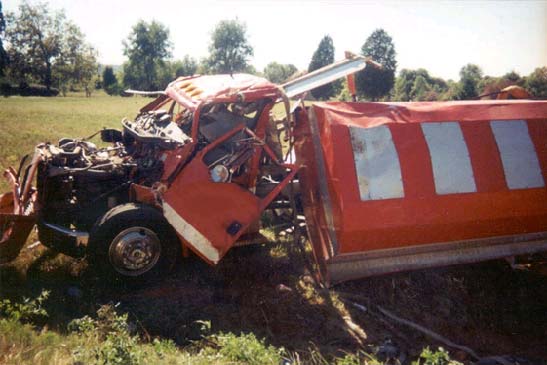 Tanker Truck Involved in the Incident

On September 5, 2002, a 17-year-old male volunteer fire fighter (victim) was fatally injured after the tanker truck he was driving overturned while responding to a brush fire. On September 6, 2002, the U.S. Fire Administration (USFA) notified the National Institute for Occupational Safety and Health (NIOSH) of this incident. On October 21, 2002, two safety and occupational health specialists from the NIOSH Fire Fighter Fatality Investigation and Prevention Program investigated the incident. The NIOSH team met with the department Chief, fire fighters who were directly involved with the incident, the ambulance driver, and an off-duty police officer who was an eyewitness to the incident. The team visited the site of the rollover and took photographs. NIOSH investigators reviewed the department standard operating procedures (SOPs), the driver’s training records, witness statements, the Tennessee uniform traffic crash report, and the medical examiner’s report.

This volunteer fire department has 39 active fire fighters within 3 stations and serves a population of approximately 60,000 in an area of about 55 square miles. The department has nine junior members, six of whom are under the age of 18.

Training: The 17-year-old victim had been a junior volunteer fire fighter for approximately 2 years. He had completed approximately 168 hours of training, including 36 hours of driver training and a 2½-day emergency vehicle operation course (EVOC). The victim was trained in the operation of the tanker truck involved in the incident, but this was the first time he had responded to an emergency with this vehicle.

Road and Weather Conditions: The incident occurred on the straightaway of a two-lane, asphalt county road without a shoulder and with a gradual drop-off. The road is approximately 24 feet wide with a posted speed limit of 45 mph. At the point where the truck came to rest alongside the road, the ground (the drop-off) was approximately 40 inches below the road surface. The road was dry at the time of the incident. According to the traffic report, there were no adverse weather conditions on the day of the incident.

Equipment: The apparatus that overturned was a 2001 tanker with an elliptical, 2,000-gallon water tank. The water tank had containment-type baffling with two longitudinal and three horizontal baffles and was full. The distance from the ground to the top of the tank was approximately 100 inches. The Gross Vehicle Weight Ratinga (GVWR) for the truck was 35,000 lbs.

On September 5, 2002, at 1458 hours, this volunteer fire department was dispatched to a brush fire around a housing subdivision. The first to arrive on scene was a fire fighter in a brush truck, and he requested additional equipment. Next to arrive was the Chief in an engine, followed by an officer in a personally owned vehicle (POV). The victim responded to the station and radioed the Chief for instructions. As no one else was in the station, the Chief gave the victim permission to drive the tanker to the fire ground without lights or siren. The victim, who was alone, had traveled approximately ¾ of a mile and was within 100 yards of the turnoff to reach the brush fire when the crash occurred (Diagram). Note: According to an eyewitness to the incident, the victim was driving below the speed limit, without lights and siren.

Based on the sequence of events and an eyewitness report, immediately prior to the incident the victim may have been distracted either by using the radio and/or by the sight of the smoke. He had just communicated via radio to report his arrival and to ask for staging information. To reach the radio, which was in the middle of the dashboard, the driver would have had to lean forward, take one hand off the wheel, and briefly lose eye contact with the road. The dashboard was approximately 72.5 inches wide, and the distance from the center of the steering wheel to the radio location was approximately 22 inches.

Just before the incident, an off-duty police officer passed the tanker from the opposite direction and witnessed the right passenger-side rear wheels of the tanker going off the edge of the road. Reportedly the driver applied his brakes and tried to steer the vehicle back onto the road surface by cutting the wheel sharply to the left. Presumably this sudden turning movement produced a weight shift and caused the tanker to roll over. The tanker rolled once and landed right-side up. The cab of the truck was crushed. During the rollover the tank detached from the chassis (Cover Photo) and a metal L-shaped plate from the tanker/chassis area pushed through the center of the rear window.

At approximately 1510 hours, the volunteer fire department was notified of a motor vehicle crash involving its own tanker. The Chief arrived on the crash scene and noted several emergency units and civilians trying to help the victim including paramedics who provided advanced life support (ALS) through the rear window of the cab. The driver, who was wearing a seat belt with shoulder harness, was partially ejected through the driver’s side door and was pinned between the top of the door frame and the door. Mutual aid was requested to extricate the victim; the extrication took approximately 20 minutes. ALS was continued in the ambulance en route and at the hospital until 1550 hours when the victim was pronounced dead.

According to the medical examiner’s report, the cause of death was massive head and chest trauma.

Discussion: Traffic crashes are the leading cause of death among individuals 16–20 years old. Numerous risk factors have been implicated in the elevated traffic injury and fatality rates among youth, including inexperience, immaturity, driver error and failure to adjust to road and weather conditions. NIOSH recommends that 16-year olds be prohibited from all work-related driving tasks and that 17-year olds be limited to incidental and occasional driving in work settings.

In its publication Junior Fire and Emergency Services Program and in its guidelines for emergency vehicle response, VFIS, the insurance company for this department, states that staff under the age of 18 should not be permitted to drive emergency vehicles under any circumstances. Further, VFIS states that individuals between the ages of 18-21 who have demonstrated exceptional personal driving abilities may become emergency vehicle operator trainees but that they must remain as trainees until their 21st birthday.

Although the victim had many hours of training, including EVOC, he was a minor, and this was the first time he had driven the tanker on an actual call. The department has SOPs that reflect their insurance carrier policies stating that individuals must be at least 21 years of age before becoming a driver of fire apparatus. The SOP for responding apparatus to incidents, however, has a qualification that drivers must be 21 years of age “unless an emergency situation occurs and there is no one over 21 years of age in-service to respond the apparatus” which was the case in this incident. If a qualified driver is not available for the initial dispatch, a request should be made to Central Dispatch to tone out a department driver or mutual aid.

Recommendation #2: Fire departments should ensure that the radio in the driving compartment is within convenient reach for the driver. 4–6

Discussion: Although it cannot be positively determined that radio communication distracted the driver, the placement of the radio may have been a contributor. It is important that drivers are made aware of the dangers of using a radio while in transit because as attention is directed away from the external driving task to the internal, cognitive task of the radio conversation, driving performance can be impaired. According to the National Highway Traffic Safety Administration (NHTSA), “driver inattention to the driving task, the key safety-relevant outcome of driver distraction, has been implicated in many traffic crashes” (Ch. 6). NFPA 1901 states that displays and controls such as speedometers, hazard indicator lights, and warning lights and siren switches, located in the driving compartment “shall be identified and visible to the driver while seated.” This standard defines convenient reach as “the ability of the operator to manipulate the control from a driving/riding position without excessive movement away from the seat back or without excessive loss of eye contact with the roadway.” The standard does not specifically address radio placement. Note: The department subsequently moved the radio in its new tanker closer to the steering wheel/driver.

Discussion: NFPA 1451 § 5.3 states that fire department personnel must be trained in and exercise applicable principles of defensive driving techniques under both emergency and nonemergency conditions. SOPs for driving fire department vehicles during nonemergency travel and emergency response should include, but not be limited to, the principles of skid avoidance and the effects of liquid surge, load factors, general steering reactions, and speed on vehicle control. Common causes for loss of control are driving too fast for road conditions, failing to properly appreciate weight shifts of heavy emergency vehicles/apparatus, driver distraction, and failing to anticipate obstacles.

Driver training should incorporate vehicle characteristics, capabilities and limitations. Tankers, for example, tend to be heavier and to have a higher center of gravity than other fire vehicles. Both of these factors affect the driver’s ability to control a tanker. Based on simple physics and inertia, a top heavy vehicle like a tanker is inclined to tip over if driven through a curve at an unsafe speed or if the driver suddenly turns the wheel in an effort to bring the wheels back onto the road. VFIS lists some vehicle rollover prevention points to increase a driver’s ability to maintain control of a vehicle should he/she run off the road onto the shoulder. VFIS cautions that the vehicle should be slowed gradually by taking the foot off the accelerator, feathering the brakes, and downshifting. Only after the vehicle has been brought down to a safe speedb, should it be gently steered back onto the road.

Recommendation #4: States should consider developing a junior fire fighter and emergency service program that addresses the tasks that minors are permitted to perform in the fire service. 1

Discussion: The victim in this incident was a minor. Tennessee presently does not have a written program addressing junior fire fighters. Such programs serve to raise interest among young people in becoming adult emergency service providers. These programs also must consider safety, liability, child labor laws, and similar issues. In addition, even though the victim was not a paid employee, child labor laws in Tennessee preclude minors from participating in hazardous work activities such as driving.

a The National Highway Traffic Safety Administration defines Gross Vehicle Weight Rating as the maximum rated capacity of a vehicle, including the weight of the base vehicle, all added equipment and passengers, and all cargo loaded into or on the vehicle.

b According to USFA/FEMA (p.113) the appropriate speed at which to remount the paved surface is estimated to be 20 mph or less.